It may seem to be more than a little odd to go out and review a title like Cave Story.  A game originally released as a freeware PC title and developed by one individual who toiled away for five years in order to more or less become the archetype for many indie developers to follow.  In fact, Cave Story is probably a good reason for why independent gaming is where it is today as the game served as something of an inspiration that not only was there milage in making retro styled games, but just about anybody could make them with enough know how.  That said, I played the Steam version of the game after playing the Wiiware one way back in 2010, and trudged my way to the “good” ending because why would I ever go through something the creator finds challenging?

Cave Story begins very innocuously, as you are a robot boy who finds himself in a world filled with strange humanoid white furred animals known as Mimigas who are limited in numbers and are living in a floating island filled with caverns, video game style contrivances, and a far darker twist than anybody with no prior knowledge of the game would expect.  As the plot boils down to a man placing on a crown that makes him utterly bonkers and attempt to take over the world by causing the Mimigas to become vicious beasts who would promptly maul the implied to already be dwindling human race.  And as a story, I actually found it to be very compelling for what the game is, being an action platformer, and containing a cast of memorable faces who managed to cement something of a following in the past decade, even though I found some of their dialog to be a bit stilted and in need of a once over. 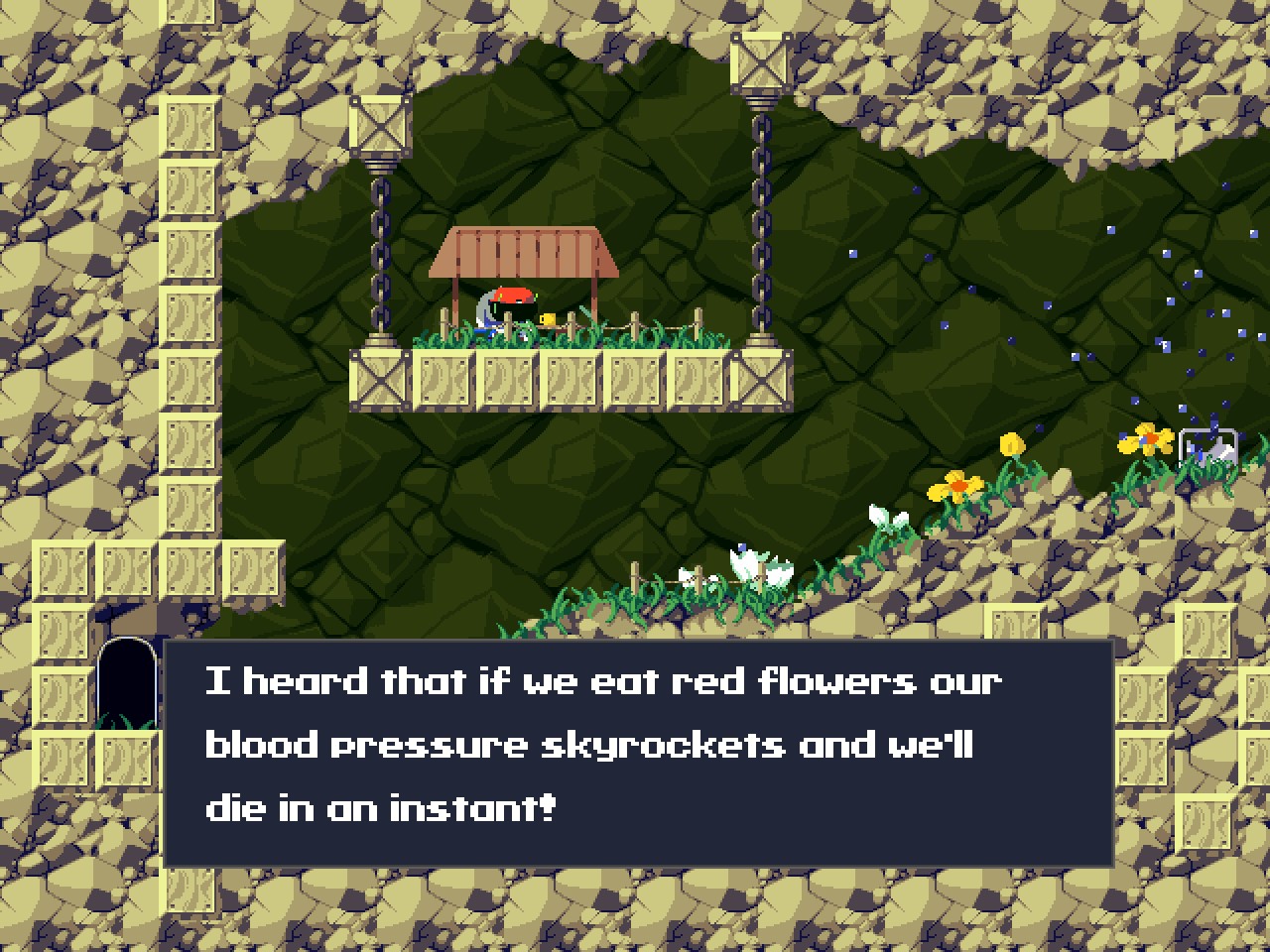 I still hold a large degree of fondness for the world it crafts in terms of sheer visual appearance and even design in what I believe to be the game’s third sprite based design, which while lacking a certain charm by removing a lot of the pixel based emphasis at the costs of having details such as smooth tiles and a derpy looking mouth for the main character, was a change I certainly grew accustomed to as I played.  Likely due to how the smoothness of the new art style allows for the original designs to be that better represented.  I was, however, not nearly as much of a fan of the new music, which felt very minimal and subdued in comparison to the jamming remastered score that certainly fit what is, at the end of the day, an action game.

Yet my gripes naturally would come from the gameplay, but deciding what exactly about this particular playthrough out of the three I previous went through did not particularly fit my fancy is a question that must be answered, and I have to say I struggled to determine what it was for quite some time.  When I found Cave Story to be a fun title, I was able to maneuver the robot, named Quote if you were crazy enough to shoot for the “true” ending, with extreme ease relative to the large 2D environment while being able to keep tabs on enemies and the arsenal Quote gradually gains access to.  When I found it to not be fun, the exact opposite occurred, as something prevented movement or simply comprehension as projectiles began to fire in quantities too large to manage with the tools available, mostly because the only one that would be particularly good would be the missiles, which I am hesitant to use in just about any game due to my childhood fear of running out of anything in a video games and being unable to obtain it afterwards, even though they have replenishing stations. 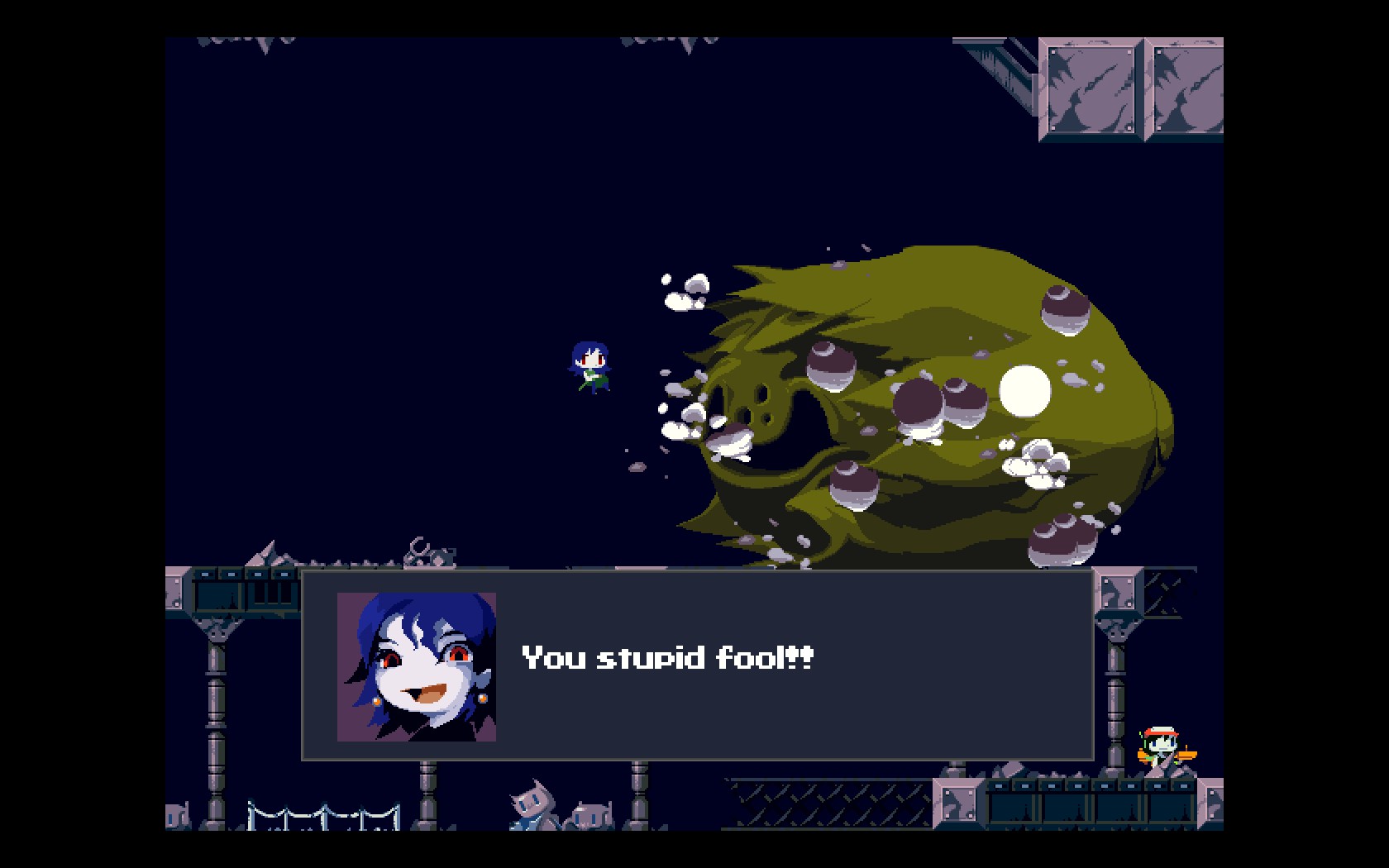 However, those replenishing stations only do pertain to health and ammo, are the only place aside from one that comes to mind where such regeneration takes place, including right after bosses, and they don’t do anything to refill the very tedious to replenish weapon experience, a resource represented by jiggling triangles that is lost whenever Quote is hit, and lowers the weapon’s level as a result.  Meaning that the ideal is to play through the game without ever getting hit as it could potentially and very possibly lead to going back to a previous enemy infested area in hopes of regaining your lost assets, and trust me when I say this became more tedious for me than I ever could have recollected it being.  With the worst part being how it adds no inherent value to anything aside from boss battles as the player would and should grow accustomed to the level MAX weapons as the default ones, even though bringing some to that level, especially in certain sections of the game, just suck.

Bosses are naturally the worst, as there are a relatively large number of times where I messed up during a boss due to my simple learning of the enemy patterns and came out with a few wounds that needed to be worked on before healing for no apparent reason other than to be busywork.  It’s even worse when place in an area that is already tricky to move around, with the beginning of the Labyrinth, current filled underwater area, and Last Cave all being an overly careful crawl, as I reloaded regularly just to not need to go through the tedium once more.  The Last Cave especially as it lowers all of Quotes’s weapon energy to nothing for reasons I can only comprehend once placing myself in the shoes of a man making a game for himself over the course of an arduous five years, which has it as flipping the bird to the audience.  Although, I’d sooner say it was a decision to add in more difficulty for the sake of just that, difficulty.

In fact, there are quite a lot of times where I got that impression.  As the final boss is something of a gauntlet of four bosses, the first three of which are manageable upon understanding and learning how to manipulate their patterns.  But the last one, who is only available to brawl after drudging through the other three, is not only guarded by two sub bosses, is a stage in himself, but launches homing missiles very frequently while often hiding his weak point in a cluster that I only got through by brute repetition and mid battle health grinding in 2010, and by using the sole healing item available in 2014.  But that’s not the proper end of the game, as there is a secret true conclusion only accessible by finding a secret item, doing a tricky to time jump, backtrack to the starting area and go through some riddles with a mushroom, and give his corpse to a character who will then open up a door that would normally be closed, after the final battle.  Also, it is by far the hardest area of the game to the point where the game’s creator still has trouble with it, which I believed people determined to not be good game design way back in… 1987. 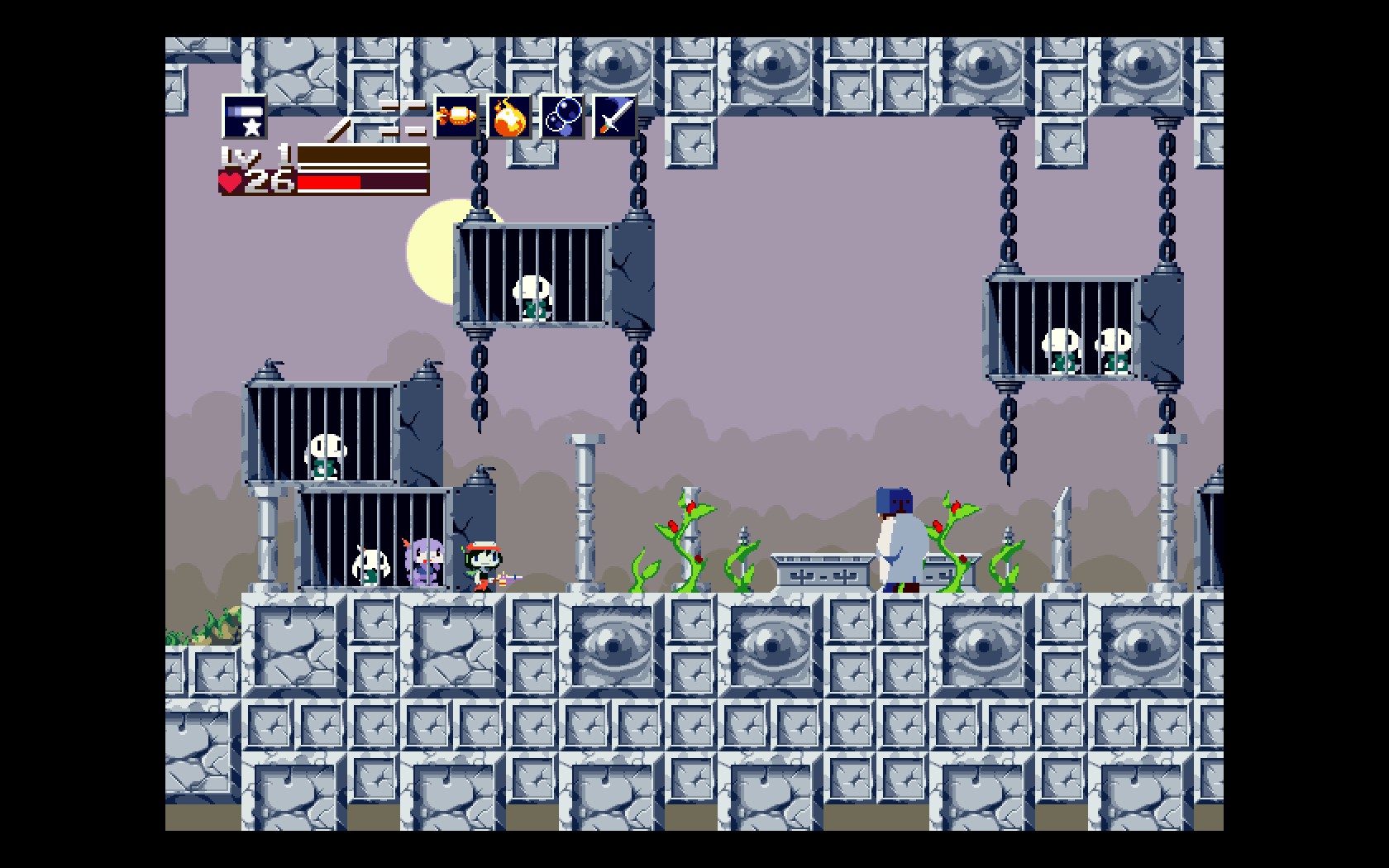 But let’s go back to the weapons, as I was shocked to a certain degree over how seemingly useless the bulk of them became in my playthrough.  There’s an optional gun that shoots bubbles  and creates an unreliable barrier of them around Quote while firing based on a recharging battery, though it does very little damage.  A fireball which is a very limb orb that is only useful in slope filled areas and  for ground based bosses, nearly all of which vanish at about the halfway point.  And finally a sword, which is only useful on its max level as it is a very short ranged one direction projectile that requires loads of weapon experience to bring back to usefulness.  But then there’s the interchangeable weapon, which is the best weapon in the game, no matter what it ends up being, whether it be a machine gun that can send Quote flying, a wave beam that is obtained by sacrificing the fireball, or the most powerful weapon and one that doesn’t use any weapon experience, a charging laser that made me grateful I could map the fire button to RB, as holding B and pressing A is the most discomforting one can do with two buttons.

Unfortunately, actually obtaining and figuring out the routes to these weapons is very presumptuous for a game that, as far as I know, was just dumped on the internet back in 2005 before being remade a couple times.  With it being necessary to track back to the starting area in order to obtain the laser after avoiding two prior weapons and keeping the borderline useless pea shooter you have.  With the worst part being how that is, indeed, the best weapon in the game and that route is ideal.  Actually, no, the worst part is that aside from this large chunk of the game, there is something I feel as if I really could sink my teeth into, mostly due to the simple fact that I did.  I don’t take any real pride, let alone joy in saying that during this playthrough, Cave Story came across as an unrefined mess that did not properly weigh what it wanted to do in terms of gameplay, but it did so and ultimately suffered as whatever joy I could have had was countered by a heaping lump of irritation.

Alright (6.0/10)
By no means something that must be played, but not entirely worth pushing aside forever.  The title is ultimately above average and keeps the good balanced with the bad by a noticeable enough margin to still be worth picking up… at a discount.

And just to cover my ground, I am being harsh because I recalled Cave Story being, and very much wanted it to be, better than it actually is.