Okay, I feel as if I need to explain more than a handful of things before beginning what I hope will be a series of about four posts, each recapping a rather large amount, though not as large as this, of my second playthrough of Skyrim.  Normally, I would simply review it afterwards, using the piece as a landmark to see just how far I had come over the two and a half years since I wrote my first internet published game review… while not reading the original post, let alone remembering it.  But what will these posts actually accomplish?  Simply stating and explaining my opinions as I play through a 200 hour long title.  And as such, this post will assume the reader is familiar with the game, as it sold 20 million just a few months ago, and is in the top 20 best selling retail games of all time.

Now, I would like to begin where I personally began after picking up this ripe fruit from the Steam Summer Sales that just recently ended, and talk of the modding scene for Skyrim, which is the first major dive I’d taken into the not scummy underbelly of PC gaming, but one that combines both what is lovely about PC gaming with what kinda sucks about it.  I initially made my way to Skyrim Nexus, the one stop spot for modding the title, and went through more than a few hours of irritation as I desperately attempted to get the relatively tame mods I selected to properly work together.  In short, I got frustrated after devoting at least five hours into the project, which was not helped by unreliable downloads, and instructions that I likely botched up in a small, but very noticeable way.  Thereby resulting in me scrapping what I had found from Nexus, aside from a Lore-Friendly hair texture pack, and deciding to use the Steam Workshop and not particularly good Official HD Texture Pack, to not make Skyrim the Pixar level visual majesty that can be achieved through the use of 200+ mods and hours upon hours of work, but it looked far nicer than I recall it looking on the 360… at least when I wasn’t looking at snowy rocks, which look wretched despite my search for an improvement.

That said, my thoughts on the game in an order based on what I recall, as I certainly did not plan this segment as I began my second playthrough in this game, although one thing became very apparent to me incredibly quickly, I am really bad with experimentation when replaying class based games.  Well, Skyrim is not a class based game, not necessarily anyhow.  You can very much switch between a mage to a guy with a battleaxe and heavy armor at a moment’s notice.  However, I found something that had worked in my previous playthrough, a female Dark Elf who used a mace and shield while pulling out a bow and destruction based magic when combat was not close, and utilized the Dragon Shout that boosted by DPS rate more than any other, and did the exact same thing again.  This could speak greatly about how I am a creature of habit, one who finds something that works and uses it unless something goes wrong, but with a game as lengthy as Skyrim, which poses such a massive level of commitment, I find it odd to decide to go against what you know works, especially when I rediscovered something I was honestly surprised to remain in Skyrim, the balance that is on-par with a man spinning plates whilst on a unicycle.

Skyrim is the type of game where you will rush into a group of enemies and encounter some that take two hits to destroy and could only kill your character if the were static for at least two minutes, while there are others who could do that in ten seconds, but take about thirty hits to bring down.  I am not even exaggerating, not by much anyhow, as I tested both of these examples multiple times, as I learned that for a game that is very much an open world adventure, there are quite a few places where you will be slaughtered the instant you try and fight them.  Yet, I certainly did manage to defeat giant bronzed robots, tree people, bears, and even the mighty Frost Dragons, and that is by scumming it out and using the magic bestow upon me through the use of in-combat saves, environmental glitches, and sheer, dumb, and abusable luck.  Oh trust me, I tried very hard to play the game nobelly, and as I reached the upper twenties in terms of level, the sum meter certainly began to spike less often, but the fact that I encountered these spikes while going near the starting area certainly makes me raise an eyebrow as to how Bethesda expected people to play the game.  After all, I go through the map by conquering every point of interest in sight before moving onto what I dub as the most pressing of matters, which seems like a very practical way to go through a game a fourth of the size of Liechtenstein.  But then I recall how the 360 version set the difficulty at Novice as a default, thus answering many of my questions, and sending me to Apprentice for the remainder of the game. 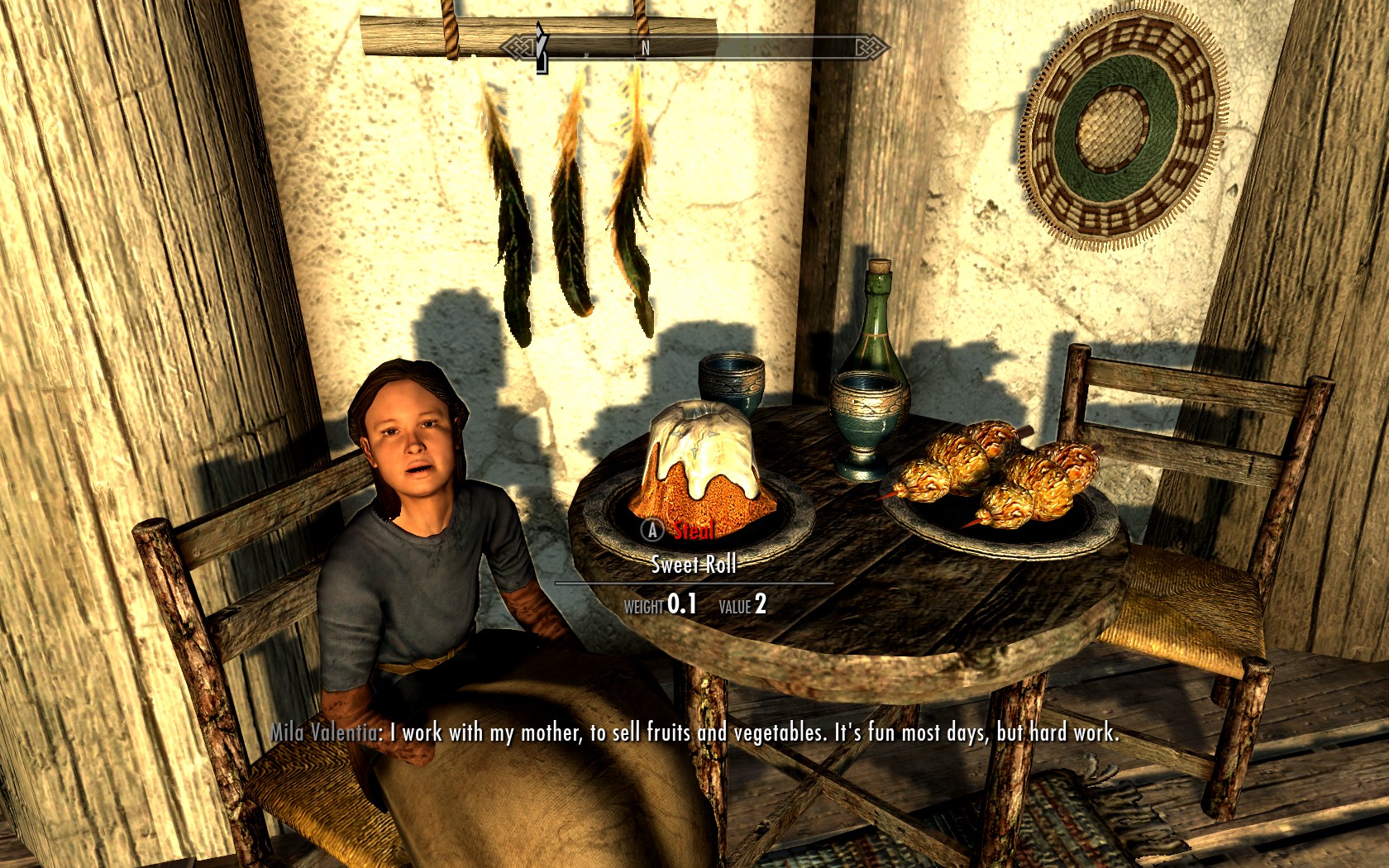 Now, I will not say that there is a large quantity of justification towards doing this, I will just say that the manner in which leveling, stats, and the game’s many skills can and is almost expected to be gamed by the player.  Case and point?  In the beginning of the game you are guided by an immortal character who you can strike as much as you want, but will not die.  You can easily use this to increase your character’s offensive capabilities, and you can easily find any given weak foe and use them to max out, say your block skill.  Hell, I got five levels from a crab in about ten minutes.  Yet, the worst of the bunch has to be Smithing, a system I distinctly remember gaming by creating what had to be four digits’ worth of Iron Daggers, which only happened to be replaced by, slightly more difficult to obtain, Gold Rings.  Resulting in a process neither fun, nor interesting, and being a grind that lacks the sense of natural and organic growth that combat based skills seem to offer. 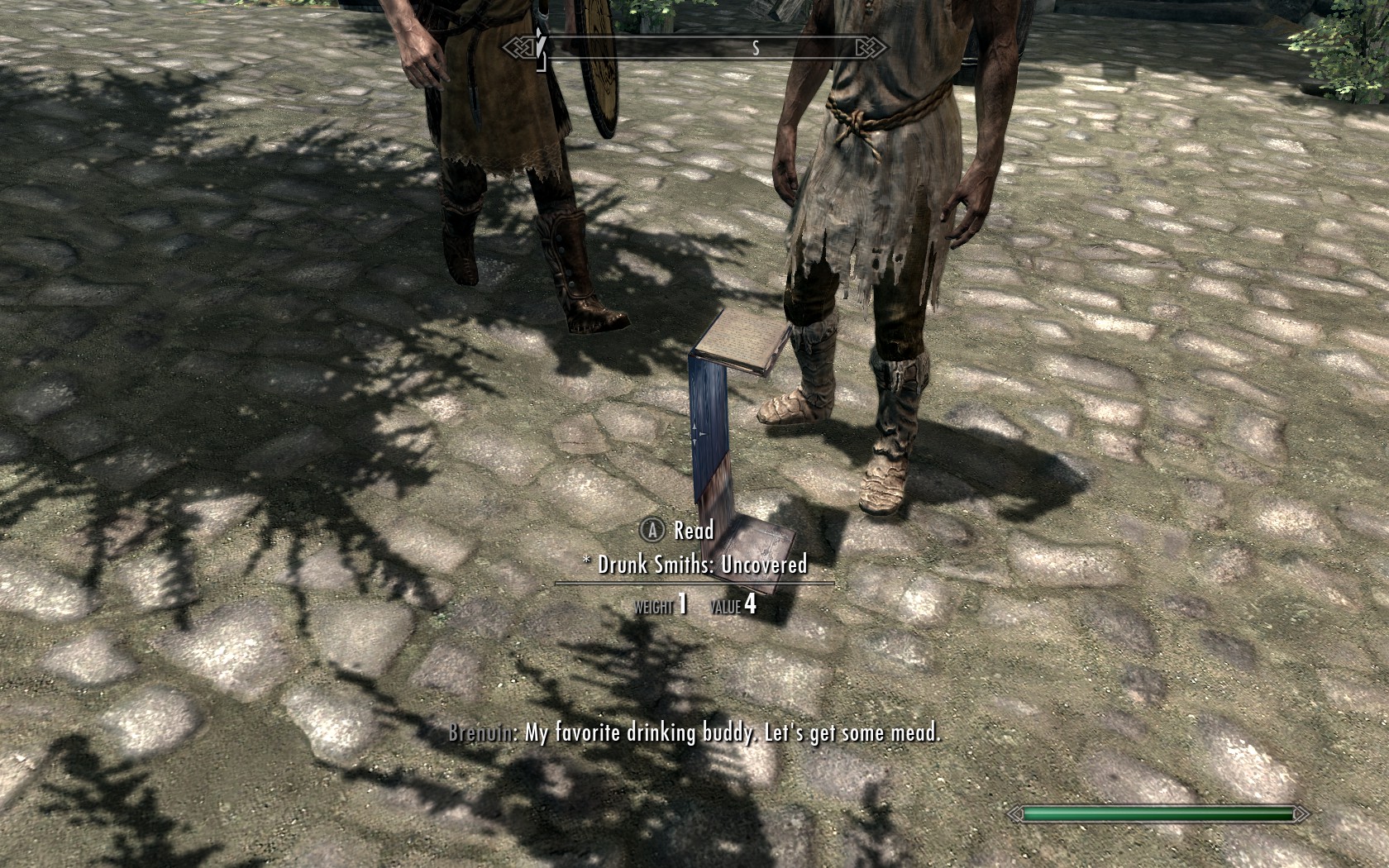 Heck, I could say the same about both Alchemy and Enchanting, two very interesting craft based divergents that the game is clearly geared towards, but I could not help but question the practicality of 80% of the potions I fused getting to level 31 out of 100, while Enchanting is a task that I honestly only saw benefit towards pursuing when creating the ultimate set of armor, as it, and every other skill in the game, require more than a bit of grind if one hopes to use them effectively.  They will also need quite a few perks to make that happen, which I always have more than a few of waiting to be used, as I almost always find them to either be amazingly useful, or just the opposite.

Yet here I am, forgetting the most annoying aspect I rediscovered by playing Skyrim, and that is the monotony of going to point of interest A, B, and maybe C before fast travelling back to a town.  From there, I spend my time looking for shopkeepers to sell your collected wares to, and preparing to do the same thing, getting just a slice of the map cleared in the process, while obtaining money that I personally doubt I’d use as you cannot pay for somebody to enchant your helmet or upgrade your gear.  Oh, but I am letting the nits get in my way of something I had also realized amidst all of these gripes, this plague’s worth, and that is how Skyrim is one of the greatest games at conveying scope, a sense of adventure, and being the most oddly silly, fun, and, sigh, epic games I have played.  So epic it needs to take a good 90 seconds to start every time I play it, and it keeps its volume quieter than any other game I have ever played during the past year of PC gaming it up that I have done. 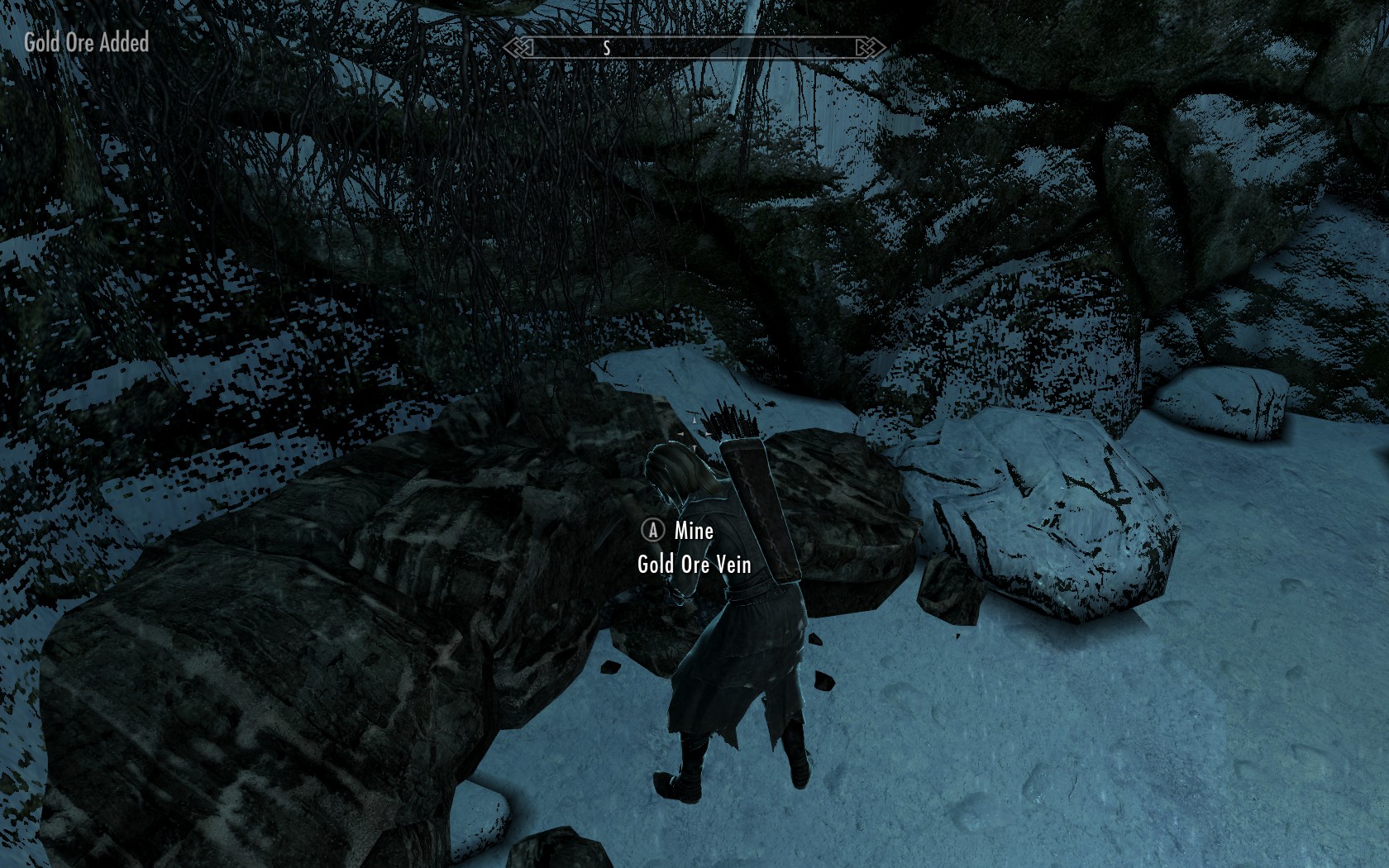 While its textures are mucky pixilated tripe at some areas, there are few games where I enjoy something as simple as exploration as I do in Skyrim.  For every time the game clearly repeats itself, there is one instance where I look at the game’s world or an instance and come away feeling nothing but bliss by the quantity of joy I am possessing by all of the factors this cobbled together delight houses.  Skyrim can easily be viewed as an ugly repetitious grindfest that was highly regarded in its heyday for hype related reasons above all else.  But it is a game where I can strip the clothes off of a vampire, slay a giant for the hell of it, and dash across the fields, modded with large quantities of grass, as a wolfman… who then eats some mammoth meat… and some ectoplasm… and some bees… golly do I love silly misadventures!