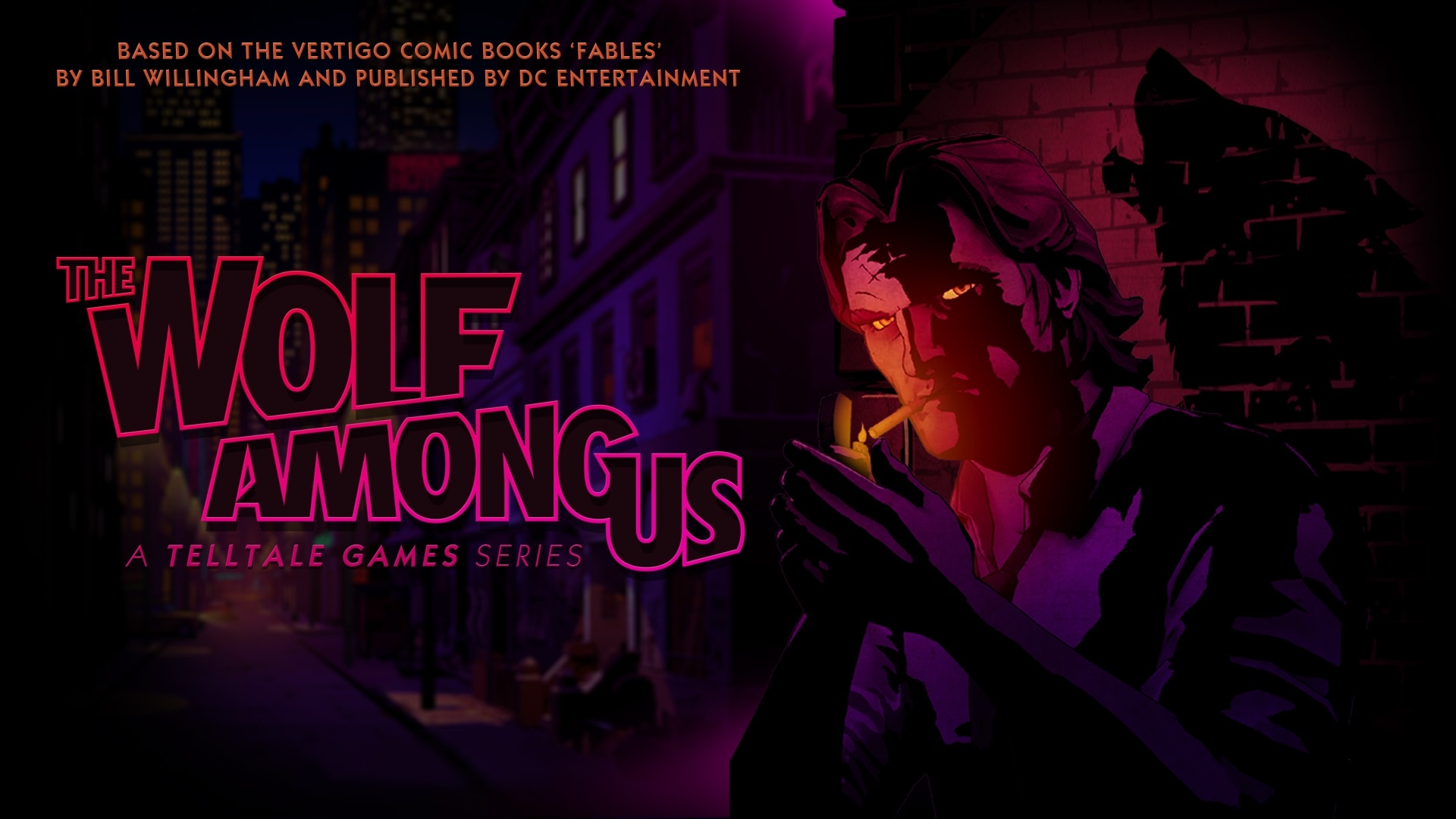 Oh goodie, another Telltale Games season that I plowed through rather quickly and walked away less than dazzled by, and having quite a bit of discomfort with what I just played, while being peased about how it was a different experience.  Yes, The Wolf Among Us was on my list of to-do for a while, and I finally dedicated two days to beat it.  I paid little mind to it during development, hoping it would pull another The Walking Dead Season One, but it did not.

The Wolf Among Us Review
Platforms: …Pretty much all of them aside from Wii U, I played the PC version.
Developer/Publisher: Telltale Games

Instead, it is rather good to first ponder what exactly The Wolf Among Us is.  Yes, a tale grounded in a universe where fairytale creatures exist and are durable creatures with great power and lengthy lives living in the Bronx during the 1980s, but the question of what it wants to do with that idea is one I feel should be answered, but I actually have difficulty doing so even after playing the game.  On one hand it is about a the Big Bad Wolf, disguised as a human, acting as Sheriff for a disorganized community of other “Fables” only to have things turn to shit when a grimy underbelly appears.  A group that may or may not be part of a complex moral message about the manner in which society works, and the failure of bureaucracy to accommodate everybody, but part of me doubts that is truly what the title is going for. 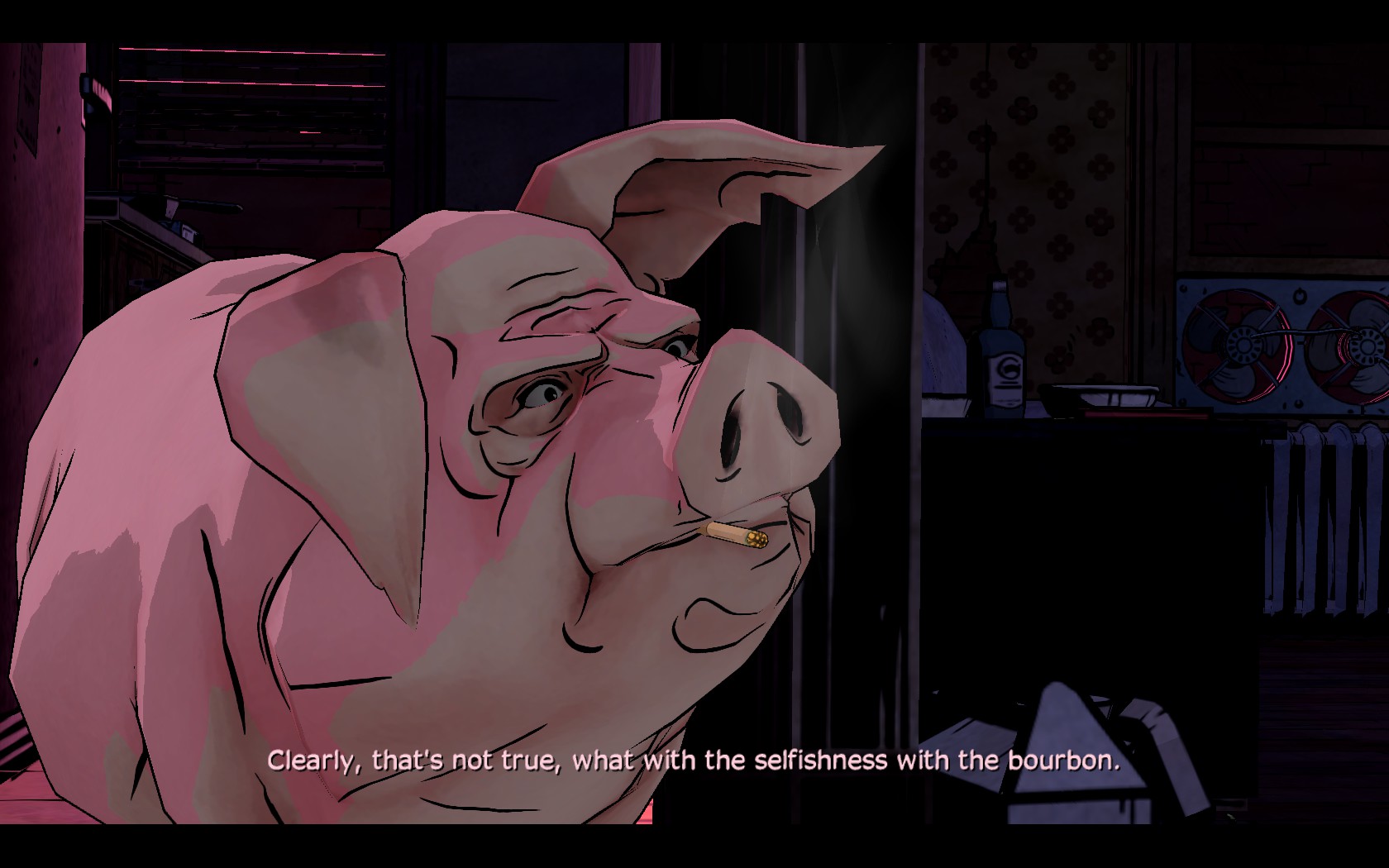 The thing about The Wolf Among Us is that the decisions made never felt as impactful as it did in the title the game is more or less molded from, The Walking Dead Season One.  Morality does not seem anywhere near as complex, and I comparatively seldom saw consequences for my actions arise.  Maybe I just had a less than optimal playthrough based on my attempt to be as good of a person as I could manage, but even then much of the core story has a very cobbled together nature that frankly reminded me of the previous Telltale title I played, The Walking Dead Season Two. 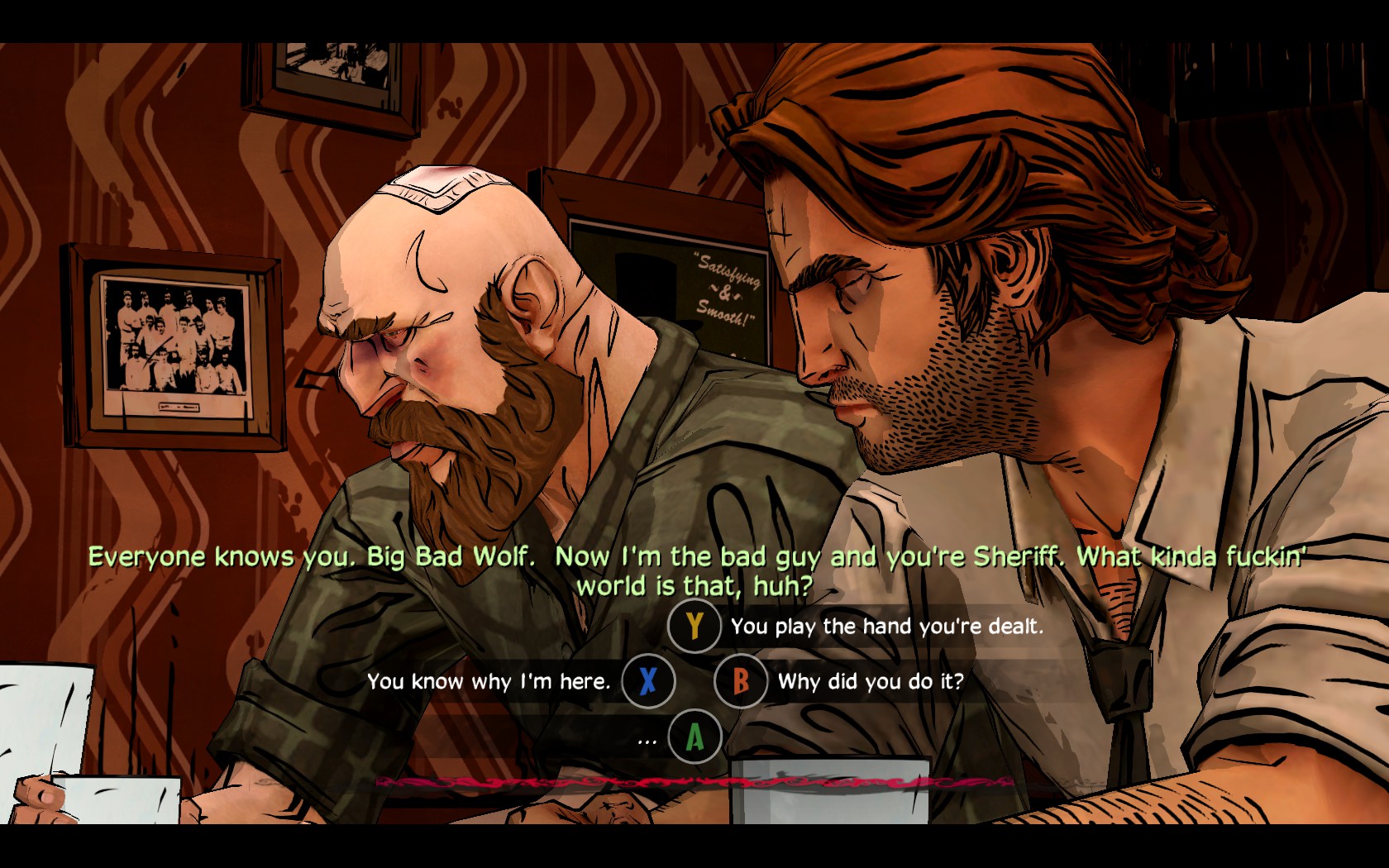 That said, I found myself far more attracted to the cast in The Wolf Among Us, as the reinterpretations of fairytale characters in a far more mature and realistic setting comes with enough appeal to carry a comic for over a decade, and a game as well.  I was certainly interested by each new element introduced in its story, and desired to see more of its world.  However, I still did not feel as if much beyond the surprisingly easy to ignore 80s setting, when it leads to an already appealing visual style to pop with a vibrant color palette… that is used best during the introductory sequence.  Still, the it is probably the best looking game Telltale games has yet made. 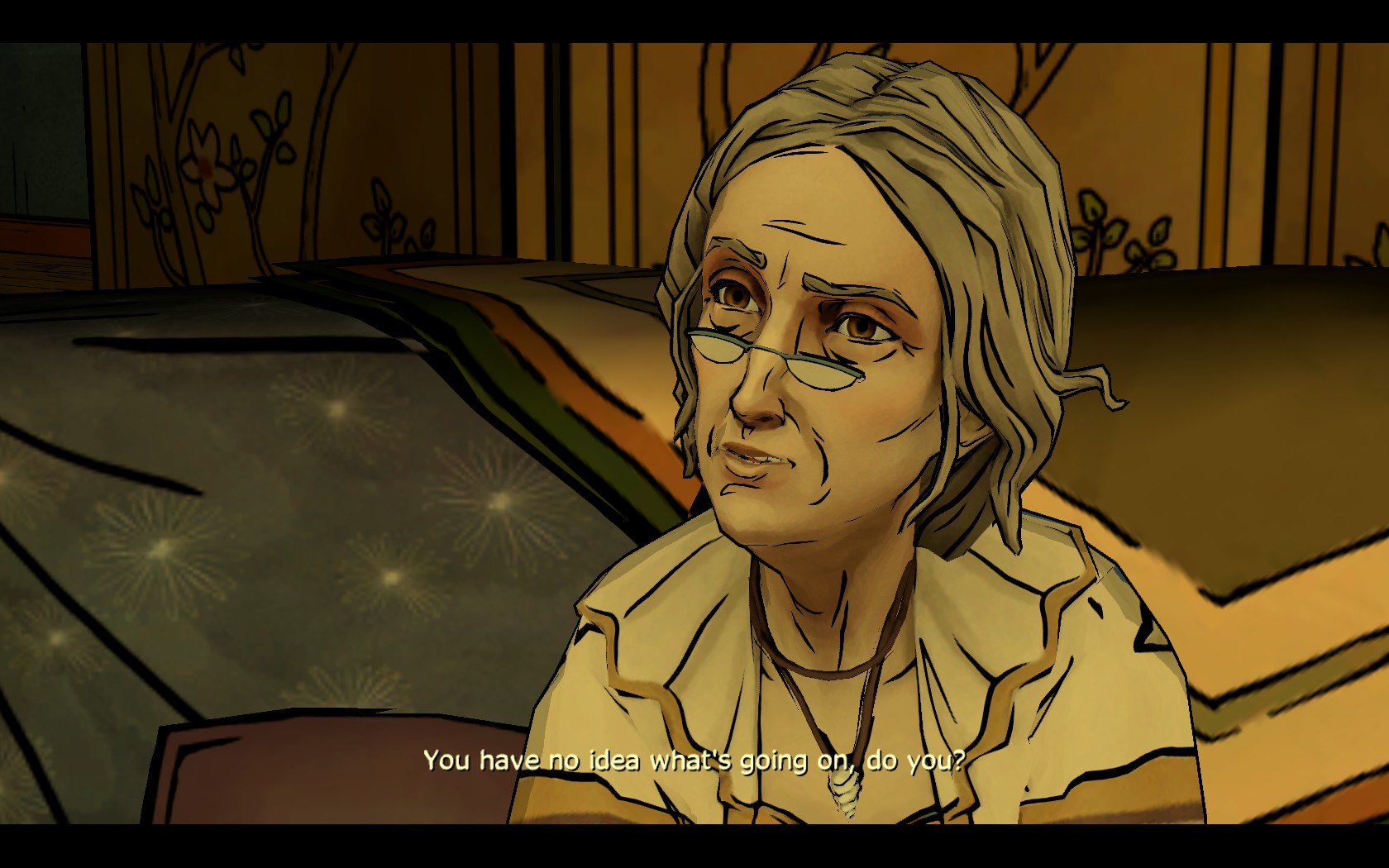 Granted, I am mostly comparing that to The Walking Dead, but that is only because the game itself is built upon it in nearly every other way, with the gameplay beyond the conversation points naturally applying as well.  The Wolf Among Us has a decent amount of environmental examination, and even teases some detective work that may be done with it alongside inventory management.  Both ideas I find to be rather novel, but for reasons I can only assume have to do with the difficulties of releasing episodic gameplay segments, they only come up about once or twice near the first few episodes as it becomes clear the game desires to focus on what I’d refer to as its combat. 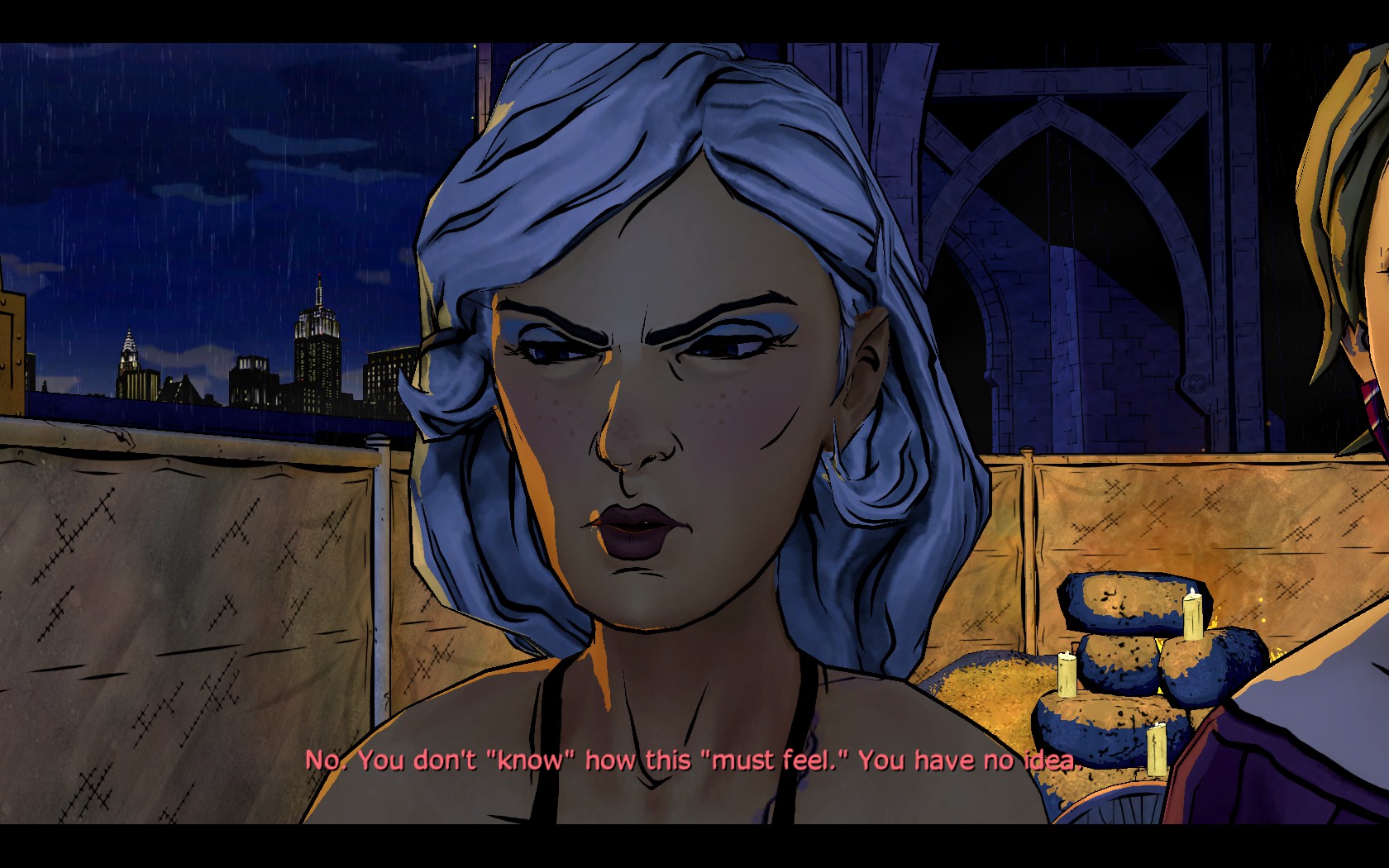 As something of a more dramatic and action centric version of the quick-time-events of The Walking Dead Season One, the combat in The Wolf Among Us can often feel a bit forced and is also not particularly enjoyable because of how often the game thrusts you into battle with another character.  I will agree it is a manner in which to keep things a bit more fresh as the story goes on, but it is not particularly enjoyable either, even if it is clear that quite a good amount of effort went into the system.  That, and its final instance is one of the most unnecessarily absurd paths the game could have taken that left me confused as the game rolled on to a rather unsatisfying conclusion. 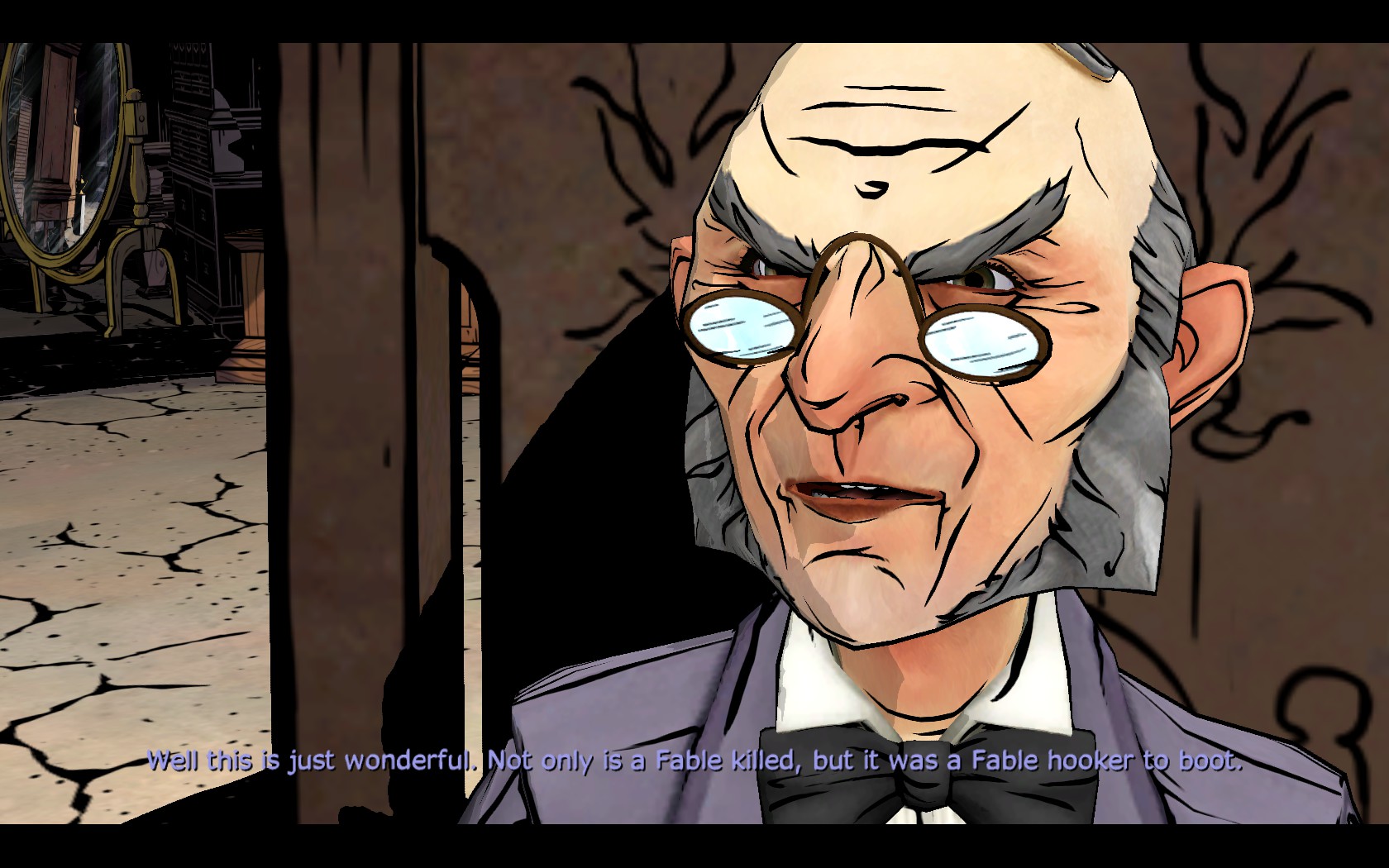 It certainly says something about the dialog paths I have been examining as I’ve played theses titles when I felt as if my actions during the final segment of the game, a trial, had little to no affect on the title beyond my final decision, which the game simplified to three actions that the player never really sees the consequences of.  To make matters worse, I felt nothing when I made such a decision, when it is the climax of the story because I felt as if I had failed by not fully understanding the plot, when I have difficulty looking back at it as anything other than the story’s fault. 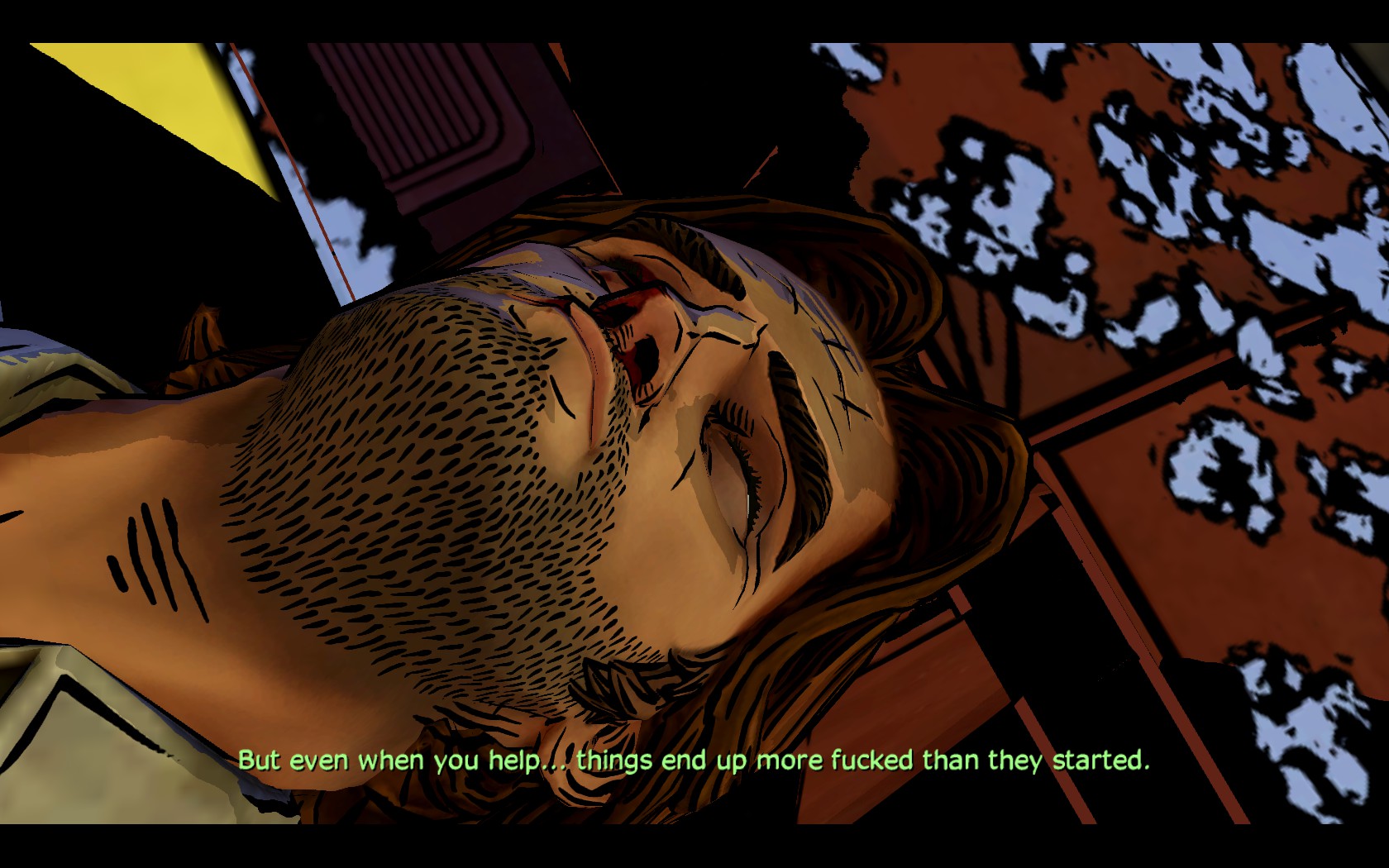 To make a review I assembled by throwing cakes against a floor that is my mind, The Wolf Among Us did not prove to be very endearing to me.  While I do feel it started very strong, I was not particularly taken into the plot, and did not find much about the gameplay to be as developed as I wanted it to be, excluding to a combat system wherein the concept of a final boss is about as baffling of the fact the game included one.  Perhaps this is a result of me willingly rushing through the game in a matter of two days, but I ended the game rather apathetically with little desire to see what comes next.

Solid (7.0/10)
The title is certainly good, yet there are one too many nagging hiccups or missteps for the faults to not be easily pushed aside.  While enjoyable, it may be lacking in many areas, or just not be that spectacular.