Before I begin, I just want to say how happy I am seeing something like this.  A decade old visual novel being released far after whatever western fans it had accepted it would never arrive, coming and being released to… a pretty small audience based on the maximum players at a given time on Steam.  It almost makes me feel a bit bad for buying it at half price, giving the publishers half the money, but that’s just me being stingy with my money, as I want to hoard as much as I can before the next big disaster occurs, and I’m going to need a mech to fend of the subhumans from the underground laboratories… or something.

Planetarian’s setting is surprisingly dark considering what little I gathered from the description before I decided the game was worth picking up at half price.  Yes, it is about an android resembling a young woman maintaining a long forgotten planetarium, but the setting for this is almost shockingly dark in just how hopeless and desolate the future is.  The main character is a Junker, essentially somebody who risks his life in order to find remnants of a world that died long ago, screwed to the point where nations no longer exist for more than a few years, and Earth can never recover from what was done to it. 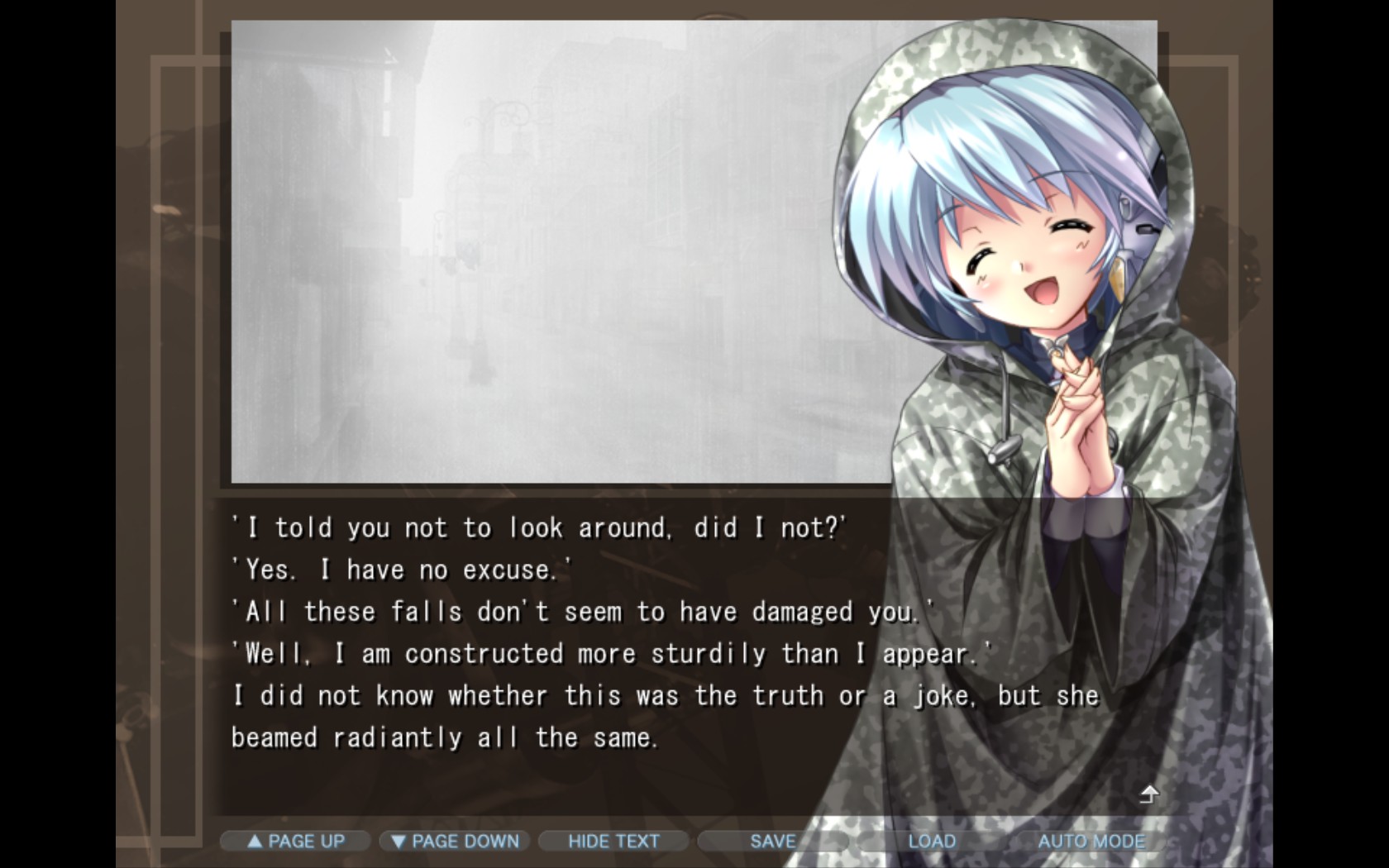 Though I would say the title is more about the android Yumemi and her inability to understand this world, as she is a budget model machine, and is a bit broken at that.  It is actually a very interesting science fiction concept that I am certain has been done several times before, with the circumstances differing with each iteration, but that doesn’t change the fact that as a character she does manage to remain interesting, and very endearing.  Granted, the story does seem to go around in circles with her inability to register that nobody will ever visit her planetarium again, and the fact that she does not seem to be very good at registering so-called critical directives.  I understand that the game is built around both the Junker’s relationship with her, and the player’s as well, but if she always feels the need to talk ten seconds after being requested that she does not is not a very endearing trait.

Though I suppose her biggest purpose is to contrast her with the rest of the world, which gradually becomes more prominent as the game exits Yumemi’s planetarium, all leading up to an effective conclusion that I guessed well before the Junker began reciting the time when a few ten-year-olds were brutally murdered by a giant war machine for reasons just about nobody understands.  It leaves the game as something of a let down as it ends on an equally bitter note after about three to four hours, but I would be far from bad mouthing that time.  While the writing is not perfect, a bit hindered by how the editor and translator were the same person if you ask me, and certain wording did put a bump in the action, I was kept on my toes, and eagerly awaiting what came next.

However, this is where the fact that while I do call this game a visual novel, it prefers the term Kinetic novel, as its Steam page, the one where it is classified as a game, claims that Planetarian is not a game.  It is true that the only gameplay can be disabled by going through the title in one sitting and pressing the auto scroll button for the text.  There are no branching paths, alternate endings, minigames, or anything like that, as it simply tells a story that, quite frankly, is probably just as good in novel form.  While I could say that the title may gain something from being on a certain device, or a certain environment, its placement in the medium of video games is debatable, but I’m saying it is a game because it is sold as one, and was made by a visual novel, meaning game, company.

That said, I was actually a bit let down by the visual aspect of the game.  Don’t get me wrong, Yumemi looks great, and the environments are very well drawn, with the rain effect for outdoor environments being a very nice touch.  Yet there is so much reuse of assets, most of which are used to add to a total of 25 CGs in the entire game, that there is really no major drawback to having this game be made into a novel, or perhaps a novella based on its word count.  Yes, there is Japanese voice acting that does help flesh out the characters, but the music, which I spied some people praise, got very repetitive to me, and only really excelled at providing atmosphere, sometimes by simply not playing anything and leaving the player to read in silence.

“Oh, so you don’t really like this, then?”  Pfft, no, I really like it!  I will admit that it does remind me a bit of A Bird Story in how brief and… devoid of aspects that make its status of a game be that meaningful.  Actually, A Bird Story at least had that one “but thou must” walking section.  The story is ultimately where the game does shine the most, and I would recommend the title for that alone.  Yes, it could easily be made into a novel, heck, give me a day and I extract the text no problem.  Mix it in some extracted CGs, turn it into a PDF, and then play some rain sound effects during the latter half of the game and you’re pretty much set…  Or you could buy Planetarian as a game, enjoy it that way, and maybe the world can get more decade old PC visual novels and other nice treats.

Distinguished (8.0/10)
An applaudable effort that does get hung up on a few branches, but very much deserving of a recommendation, as the title in question is pretty great.

2 thoughts on “Planetarian: The Reverie of a Little Planet Review”