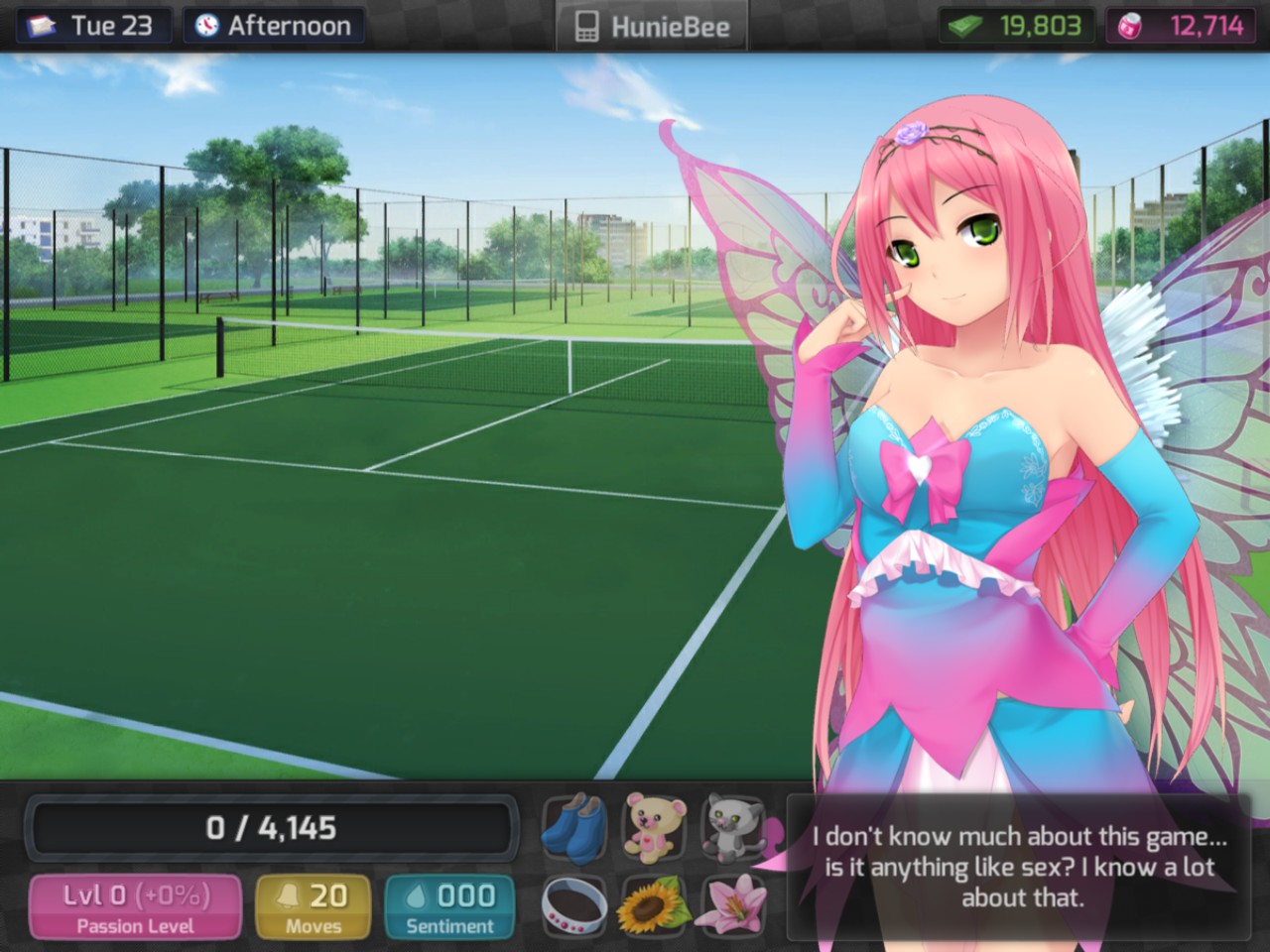 A couple months ago I was redirected to a minute long excerpt from HuniePop, and with that I felt confident enough in tossing $10 to preorder it, as I never heard of the Kickstarter.  It really was not the best move in the long run, especially since the game debut for $8, but I figured that this would be a dating sim that would appeal to me regardless of the fact that I consider myself to be asexual.

HuniePop centers around a NEET who, after failing pretty hard to pick up a love fairy at a bar is taken underneath her wings and given a chance to become the casanova, or female equivalent that they always dreamed of being.  Thus making the title a dating sim, something of a cousin to a visual novel, the writing is very much where the game makes due with its premise, and after going through the great majority of the title, I am honestly a bit stunned by the writing in HuniePop.  It’s funny, cute, crude, even a bit touching at times, and overall has a biting personality that kept me playing with a very regular grin on my face.  I certainly understand how one can view it as being unrealistic and ultimately stupid, but the… how to best articulate this, fuck it attitude that the game adopts makes it abundantly that it is not trying to be a serious portrayal of anything.  You could look into the fact that the main character adopts a catgirl they have sex with and calls them Master as something dirty if you want, but I just think it’s funny and adorable.

The characters are very much tropes when you get down to their core, and can be easily dismissed as tired stereotypes that could be further viewed as more than a little racist.  That said, they work well with the writing, and are given a good deal of personality, thanks in no small part to the voice actresses.  While I would be hesitant with praising them a colossal amount, as a few lines do come off a bit flat, they all do a great job at bringing the characters to life, possibly due to said characters’ personality being based off of the actresses, but I did not follow HuniePop’s development close enough to know whether or not that is true.  If not, then their performances are all the more impressive.

The only real gripes that I have with the dialog do come from the manner in which conversations are generated when you are hanging out with one of the dozen datable dames (is that word considered offensive, eh, whatever).  Many times they can quiz you on the various facts you learn about them right after you learn them, and when asking questions, the voice clips for asking the question and responding to your answer don’t always match that well.

That’s all well and good, but how does HuniePop actually play?  Well, you essentially talk to your girlfriends in order to learn more about them as people, and also try to pinpoint their personalities by answering a series of questions that they admittedly do repeat if you speak to them enough.  Doing so gets you Hunie, which is used for upgrading your various stats for the dates you have with these women, which are represented as match-three puzzles.  Though that term does seem to evoke that the game is far more simplistic than it is, and there is definitely quite a decent deal of strategy required to get by, at least on the Normal difficulty I stuck with.

With point multipliers, strategy defining date gifts, and trying to make use of each girl’s prefered token type, I actually did ponder my moves quite a bit during my time with the game, as you only have twenty to reach an ever increasing goal.  It actually can feel rewarding when you manage to get a good string of higher matches, and never seemed like a burden when I wanted to get some Munie.  What exactly do you use Munie for?  Presents to make your lovies give you more Hunie and maybe a date girl, food to make them tolerate your mug for longer, or alcohol to make the date night all the smoother… I think.  Alcohol is very contextual, and as such I never really used it.

I did however give a lot of presents out near the end of my time with the title, at least until the Valentine’s Day update, as for the completionist you can donate to the delightful dozen a double dozen doohickies.  Unfortunately, trying to figure out which ones you have not given each girl does highlight some user interface issues I had, as switching between your profiles for each girl feels far more monotonous than it should be given how often you likely go into their profile to make sure you are prepared for a pop quiz about their heights.

I will say that I did indeed like the UI’s appearance, along with the numerous icons, but the art assets as a whole do seem a bit limited when you really get down to it.  The Honeys whom you plan on popping do have lip synching that looks pretty good considering it was not manually done by any means, and a variety of expressions they can contort, but even after you dress them up in whatever sly outfit and haircut combination you managed to snag, you only have one base image to represent the girls.  Most of them I am rather fond of, but Kyanna in particular just looks off, as she is suppose to be very athletic, but is both dainty and holding up her breasts as if they had gotten sore from breastfeeding her son. 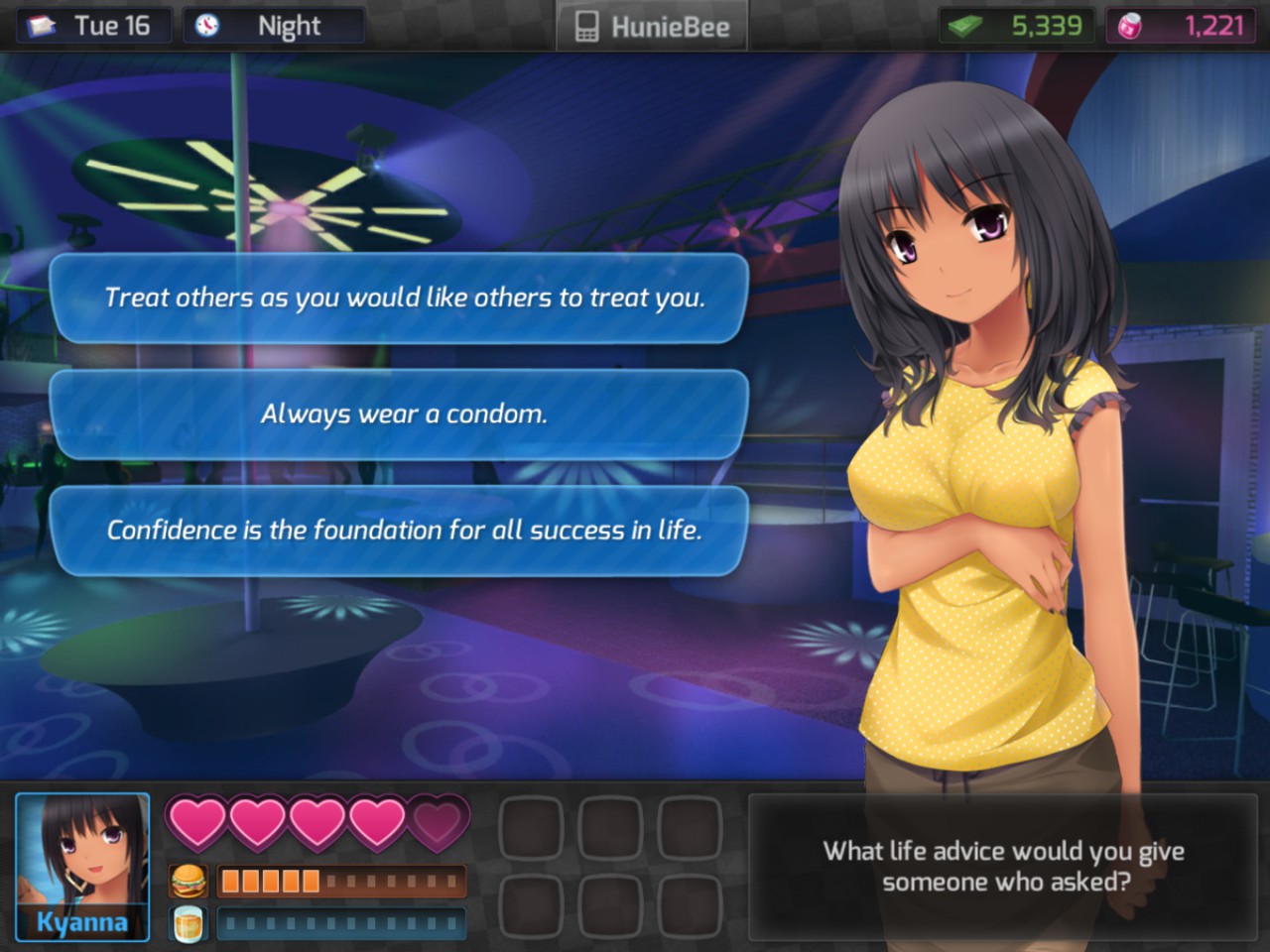 There are CGs, four per character so you can get a better look at them, but following a trend that I suppose I should have expected, at least half of them are pretty lewd, when I thought that I was getting a censored version with the Steam release.  Instead nipples are very much present even without using the uncensored patch, and it made every successful seduction seem a lot more bittersweet, at least to me.  As stated in my intro, I am asexual, and while I am find with sexualize imagery and think about some pretty darn lewd stuff on a daily basis, I don’t want nudity in a game about friendship, seduction, and being a massive cheat as well as a liar.

The game actually does little to address that the main character’s life involves bouncing between a group of girls who are either friends, or friends of friends, forming bonds, but never getting involved in any sort of trouble with multiple ladies.  In fact, aside from their introductions early on, the girls may as well exist in their own pocket dimension.  It would not be hard to justify having a scene involving, say, a porn star and her daughter, who is also one of your girlfriends, but the title seems to be perfectly content with focusing solely on the dating and relationship building, which is fine, but as much as I enjoyed asking a blue horned alien babe 20 questions, I would have probably enjoyed seeing the main eight ladies be a bit more fleshed out.

That being said, HuniePop is a game wherein you show the goddess of love your sweet puzzle skills and then get one of her panties.  It is a game that you could look at and see something that is brash, sexist, and a bit gross, and they would not necessarily be wrong.  I, however, look at the title and see a goofy, harmless, and legitimately humorous title that I thoroughly enjoyed.  Saying that the game is for everybody would be a blatant lie, but if the concept in any way entices you, I’d say it’s well worth the asking price

Distinguished (8.5/10)
An applaudable effort that does get hung up on a few branches, but is very much deserving of a recommendation, as the title in question is pretty great.

TL;DR – HuniePop probably has some of the most intimate characters in the medium, and that’s not just because you bust a move in their butthole, match five for a lady org-asm, pop a puzzle in their pussy, or solve their rubiks cube of a vagina by shoving one up where the sun doth not shine.  Or just get them drunk, switch it to easy, and just wiggle your diddler all across the screen until she thanks you.  GOTY 2015.

In all seriousness though, the game will probably be in my top ten for the year.