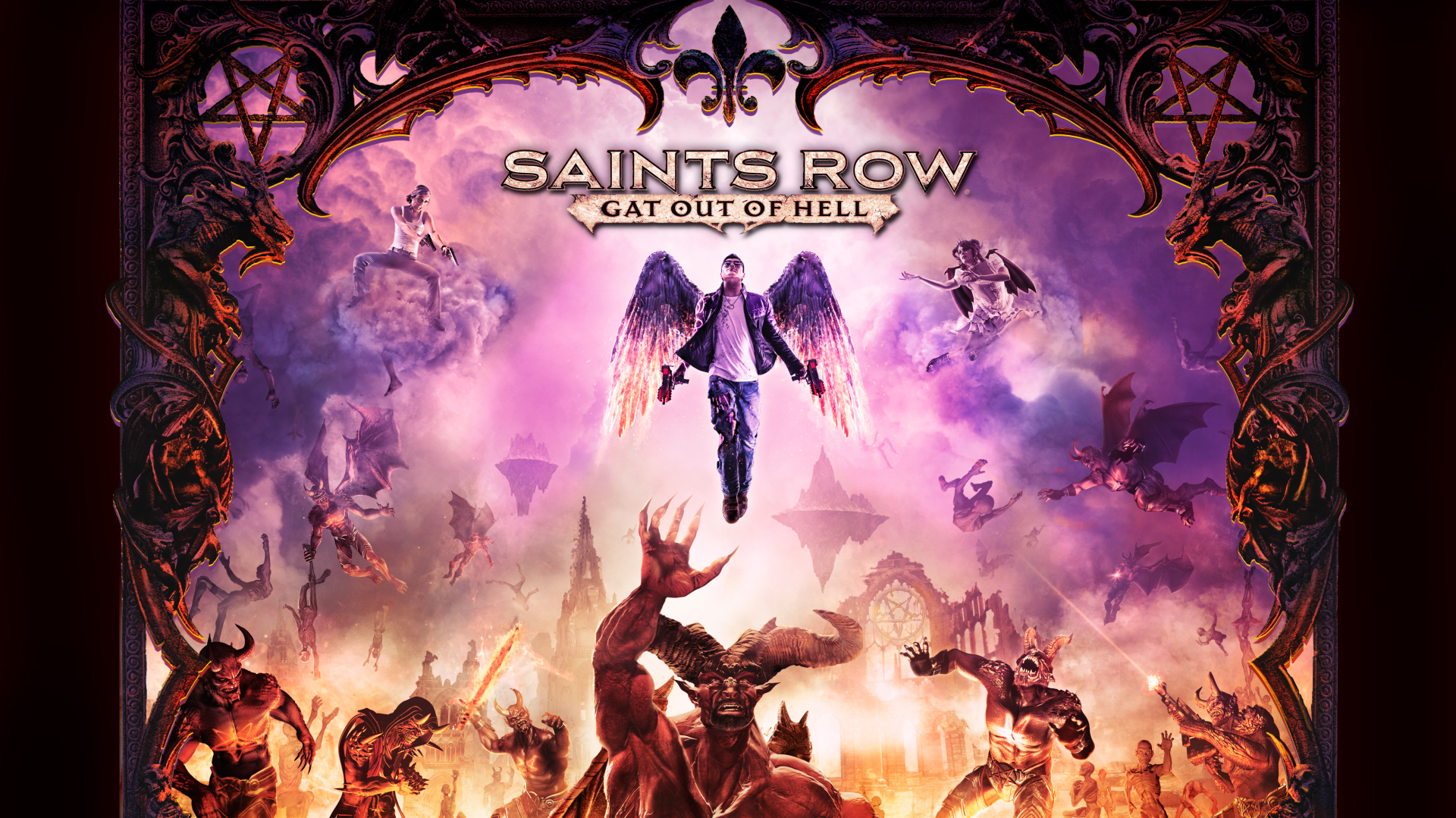 I have professed pretty regularly that I have nothing shy of a strong affection towards the Saints Row series, well, namely to parts two and four.  I have mentioned my issues with Saints Row: The Third but most of those stem from how much I enjoy the two aforementioned titles and very much want to love everything related to the series.  That said, even when viewing Gat Out of Hell as a standalone expansion that I managed to get at launch for $5 because of a pricing error, I have some pretty major qualms about it.

After topping an alien empire, witnessing the destruction of Earth, and becoming demigods in virtual reality, the Saints decided to mess around with the occult, where they accidentally opened a gate to hell, resulting in the capture of the series protagonist.  This leaves Gat and Kinzie Kensington trapped in hell where they must use the power contained in Lucifer’s halo in order to punch satan in the face and get their boss back.  Now, I very much am keen on the level of absurdity in that premise alone, but the specifics are where things get messy.

In short, what you do in Gat Out of Hell is not too different from Saints Row IV, except this time you can fly whereas you previously could only glide.  Just a different city and a few new powers and weapons to play around with, which is perfectly fine as far as I am concerned, but aside from going through activities, collecting a couple hundred things littered throughout the landscape of New Hades, and fighting off waves of enemies, there’s not much to do.  Or in other terms, the are very few proper missions, and none that come anywhere above the average that was set by, well, the past three titles in the series.  You get into a car for the tutorial mission, defeat a wave of baddies in order to recruit characters for four more missions, rescue them from a wave of demons, and then do a series of side activities for them in order to complete their “loyalty mission”. 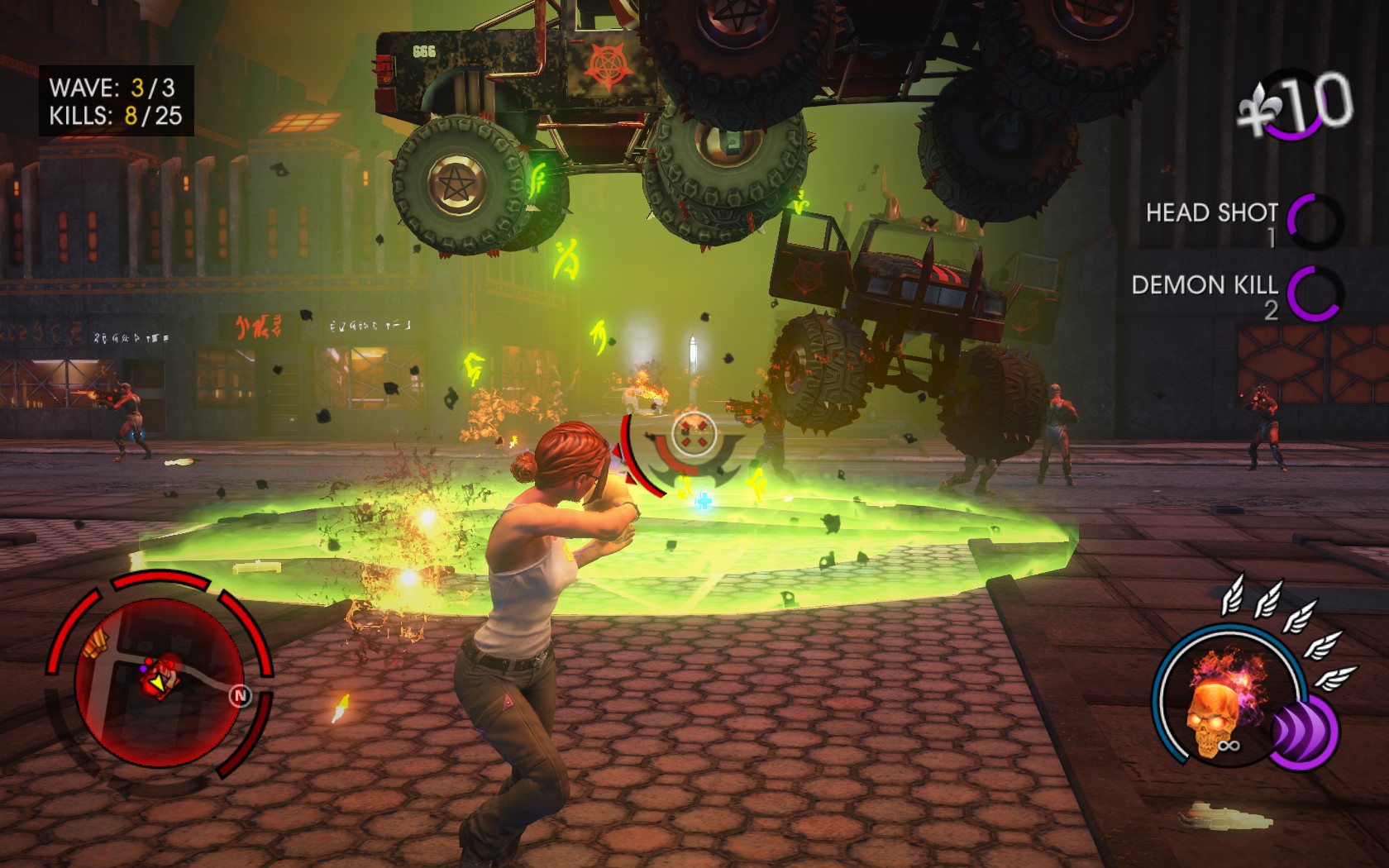 It is actually very upsetting when you consider how good the mission structure had gotten as the series went on, but instead what is given is almost alarmingly basic.  I could forgive the game if, perhaps, it took advantage of how hell is where just about every major antagonist from the series would reside, and they really don’t.  I did enjoy seeing Dane Vogel return, but he is the only one who I felt was properly utilized.  There are the Dewynter Twins, but they don’t do much in the grand scheme of things, and what little dialog they had with the player character striked me as a bit confusing, as if I missed a line or did not properly recall a character connection established in Saints Row 3, which I doubt.

Aside from them, a reference to two characters who has not been seen since part two, and the inclusion of one character who was last seen in easy to forget DLC who is reduced to a poorly explained joke, there is actually not a lot of fanservice present given the premise.  Okay, they do bring back two more antagonists from Saints Row 2, Killbane is referenced, and Gat wonders if Julius is somewhere, but these only exist for storybook cutscenes and throwaway commentary.  It is implied that there are a series of missions involving the defeat of the returned antagonists, but they don’t exist as far as I could tell, making the mere mention of these characters a massive tease for something more.  Or in other words, they pretty much trick the player into believing these characters will return, but instead you get to hang out with some cheap to impersonate historical figures

It’s easy to view the game in general as something of a tease for what the game could have been if it was treated as a full blown title, and a lot of that comes from the limitations present in the game.  Take for example the world building.  When you have a setting like hell, but choose to make it resemble a modern city due to how the game is an expansion of a title that took place in an modern city, you very much do need to explain it, and Gat Out of Hell admittedly does.  It’s just that the explanation, uncovered through the aforementioned audio logs, comes across as a massive excuse for recycling assets from part four.  It’s why you can still hijack cars, when there is really no gain to doing so, and driving around does not feel that good due to the clunky vehicle selection.  Also, you can fly.

This also means you are looking at the ground environment less, and I personally did not find much of what I did spy to be very interesting.  New Hades is generally not that interesting and I did not feel as if I was missing much of its grey and red color pallette by just aiming for the collectibles.  The most character it gets comes from the commentary offered by Gat and Kinzie, which already points out a few problems I have with the game, including how it is very unfriendly to color blind people, while not having a color blind mode.

There are also only about, and I’m trying to be honest with my numbers here, maybe fifty character models in the entire game.  Every NPC who is not a demon working for satan and fulfilling the role of the primary enemy is the same exact model, a feature deprived husk of a human.  This is a pretty major step down in regards to how much I care about the world, as I am the sort of person who gets excited whenever they see a new character design appear in… pretty much any game, and this is just baffling when you consider how much character customization is included in the Saints Row titles.  Well, not so much Gat Out of Hell, as there is none aside from your arsenal and upgrades.  Despite being characters who sported numerous outfits in the past, you are stuck with Johnny Gat in a purple jacket, or Kinzie in a tanktop and jeans, which is just a boring design.

On that note, one of the things I will praise about every Saints Row title is the licensed soundtrack, as it enhances the experience immensely, and did so quite a lot in part four as I had it on 80% of the time.  Gat Out of Hell, being a smaller expansion, does not get the same privilege, meaning that there is no radio, and you are stuck with the music that plays in the background, which is not bad, but feels empty in comparison to the prior titles.  I personally remedied this by playing music in the background, as I often do when grinding through games, and I will say it substantially increased my enjoyment with the game.  But such a boost is not in the game’s favor, as I had to increase my enjoyment with it by using something outside of it, and I do wish was included in some shape or form.

If Gat out of Hell were scrapped at some point and the title was somehow very quickly turned into a Saints Row V, maintaining all of the standards I would expect, I would be positively thrilled.  Yet the final product is one I found very underwhelming, and even its best moments are ones pretty common in the title it is ultimately a standalone expansion to.  You can soar through the skies, collecting orbs that give you upgrade points, and go through some nifty divergences, but there is nothing that I feel makes Gat Out of Hell special or even all that noteworthy.  The high points of the title for me were a cutscene and when its sequel was teased, and… well, that’s not a good thing.  It’s not bad, but there is so little that special I would be hesitant to recommend the title to anybody but fans like myself.

Alright (6.0/10)
The title certainly does have more positive elements than negative, but many of the issues present may distract from the game, or there may perhaps not be a lot of good things to say about it.  While not bad, a recommendation comes with an asterisk.