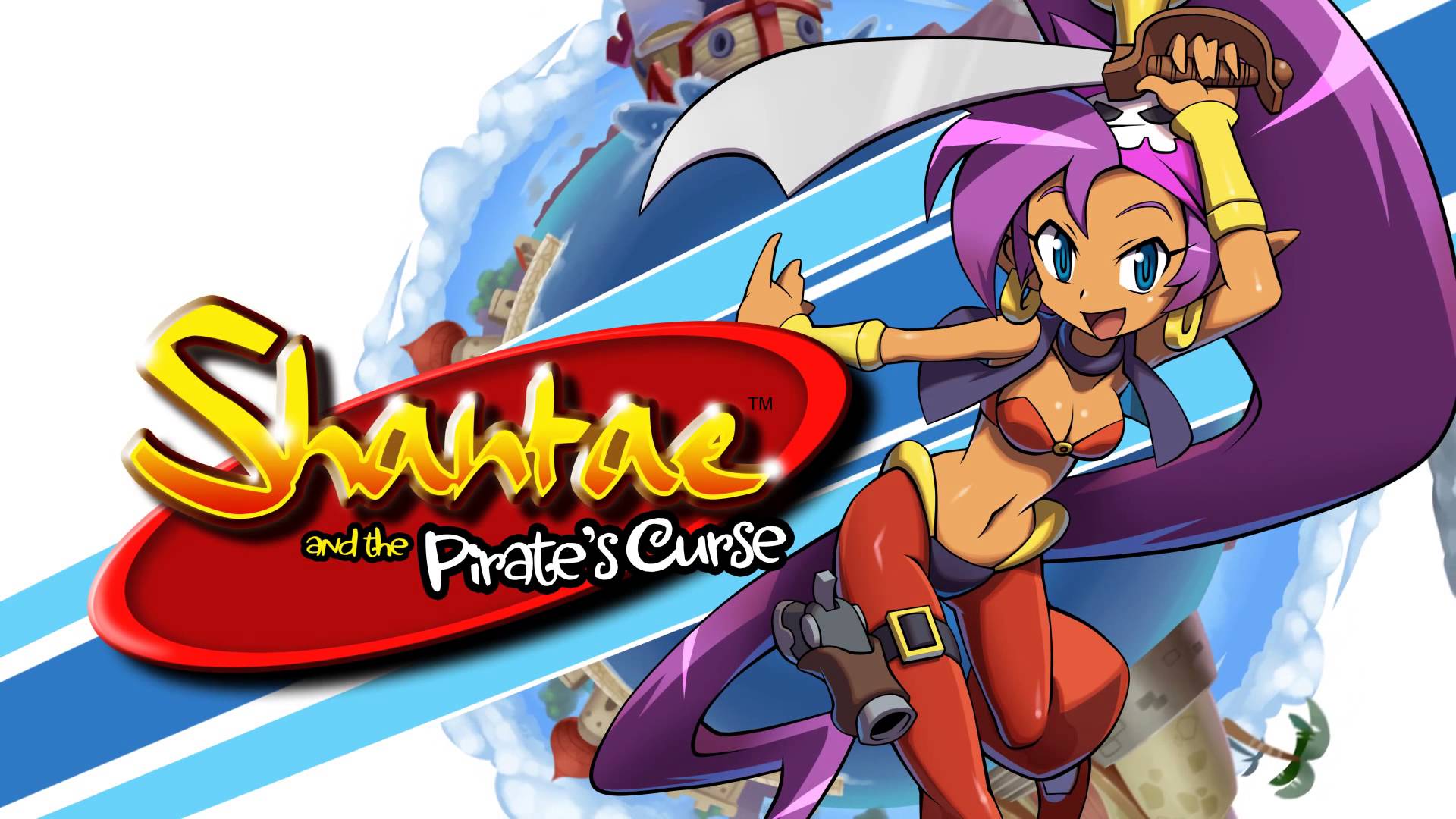 Part of me wonders if I have simply become too bitter towards games over the three years I’ve been reviewing them.  I truly do want to see the good in all games, but my mind is so fixated on the negatives that I end up seeing so many titles I was genuinely interested in and more than willing to love as simply okay.  Even if I am positive towards a game, I often wonder if I was too positive, and gave an opinion that was not accurate to how I truly felt about it.  Plus, whenever I go against the general consensus of a game, I can’t help but wonder if I am wrong for holding such an opinion, and perhaps expressed it far too negatively.  Anyhow, here’s a review of a stealth released PC port of a sequel to a game that I honestly struggle to determine whether or not I think is all that good.

Acting as a direct continuation of Risky’s Revenge, Shantae and the Pirate’s Curse follows its titular character, stripped of her half-genie magical abilities, needing to seal away an ancient evil that the series’ established antagonist, Risky Boots, accidentally awoken.  As a story, it’s not all that special, no real surprises exist, but it is entertaining in its progression, helped by a cast of colorful characters who do have their moments.  That said, I found what was present to be a bit lacking, as I genuinely wanted to see more of what are ideally established characters, when most of them only have a role to play in two or three scenes, at best.  New characters suffer even more, as I could not help but feel as if I was missing something when reading every line of dialog they had to offer.

Most characters did come across as little but side quest dealers beyond their dialog based charms, sending the player to collect an item or backtrack through a previously explore area in order to progress the main storyline.  Not that I have a problem with it, but whereas good backtracking allows for the player to become very intimate with an environment, bad backtracking is the kind you do begrudgingly, not wanting to go through an area again for a variety of reasons.  Unfortunately, Shantae and the Pirate’s Curse falls into the later camp, as I truly did not enjoy very much of my time actually playing the game. 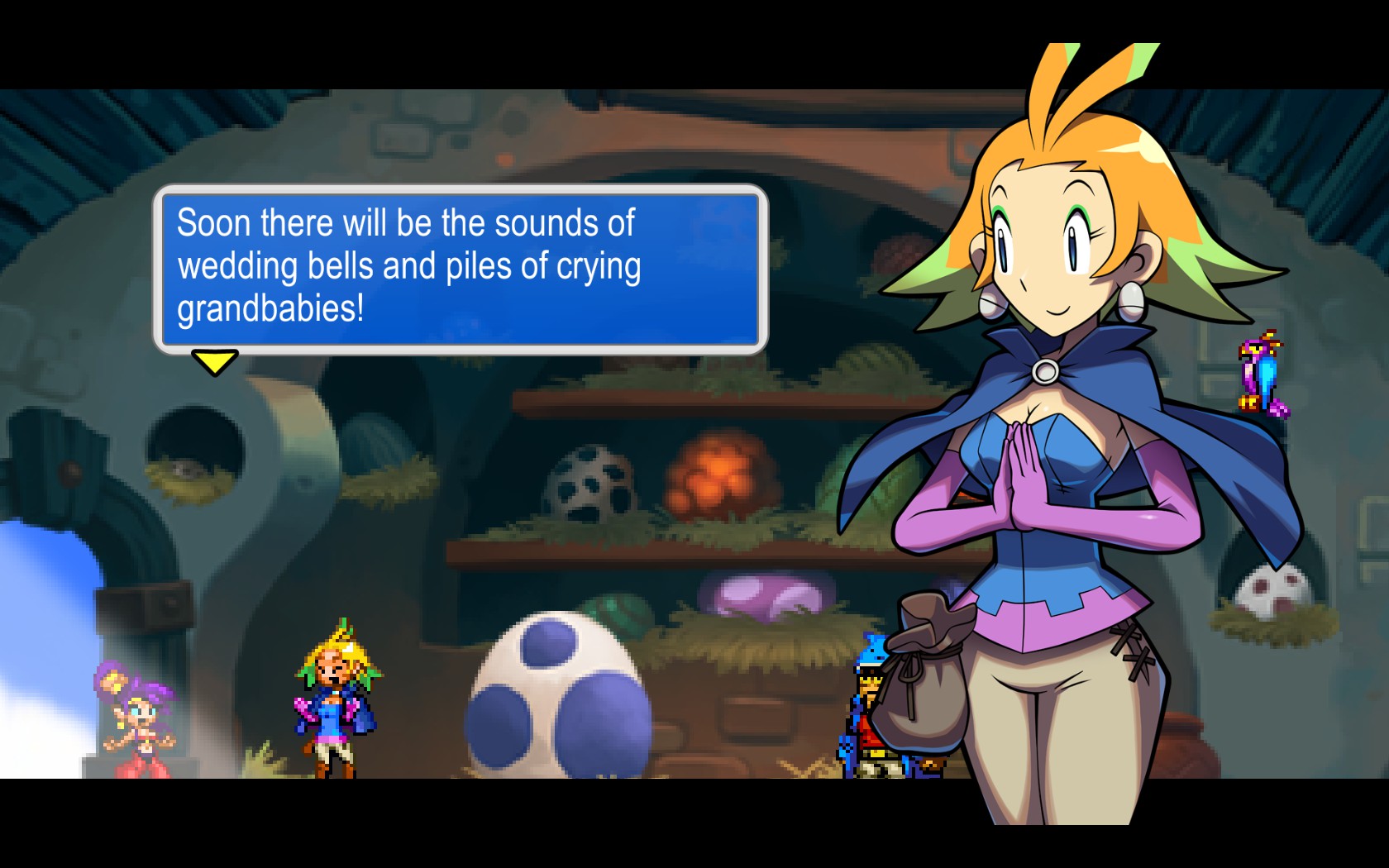 On paper the overall gameplay and progression seems a lot like a Zelda game but from a side scrolling perspective, collecting new abilities, getting minor upgrades to health and equipment, and going through enemies while taking in the sights.  But something about the actual traversal, the getting from point A to point B really did irritate me.  I mulled it over, pondering a couple of possibilities before I came to my conclusion.  Was it was due to the enemy patterns and their placement in the map being almost deliberately irksome for a game that auditorily encourages such a fast pace?  Was it due to how easy it is to lose a load of health to enemies later on, and the dissatisfaction that comes with going into your inventory to use health items.  Or was is just that I was not suppose to be the primary weapon of Shantae’s hair whip, and I should have used all the the items I picked up and ignored until the last two boss battles?

Well, all of those are factors that played a role in how this, on paper, very enjoyable title was one I slogged through in the end, but I feel that I would trace the level design as the biggest offender. There are so many area where the game offers so little margin of error that I wasn’t sure if I had accidentally selected a hard mode and forgot about it, or if I had simply become amazingly terrible at playing games after I went through the sequel four months ago.   The last area in particular was an exercise in frustration, requiring mastery of one’s moves, but also a level of precision that I honestly found to be completely unnecessary and a bit alienating to players.  What exactly is the value of being able to press a button during a .2 second interhold, and making sure the player remembered jumping patterns they could not reasonably predict due to the character’s speed?  Heck, what is the value in providing an area where the player needs to fire themselves off screen in order to progress to the final boss, instead of taking a path that is technically impossible, but the player has every right to assume they can get through it, as they just overcame a similar challenge? 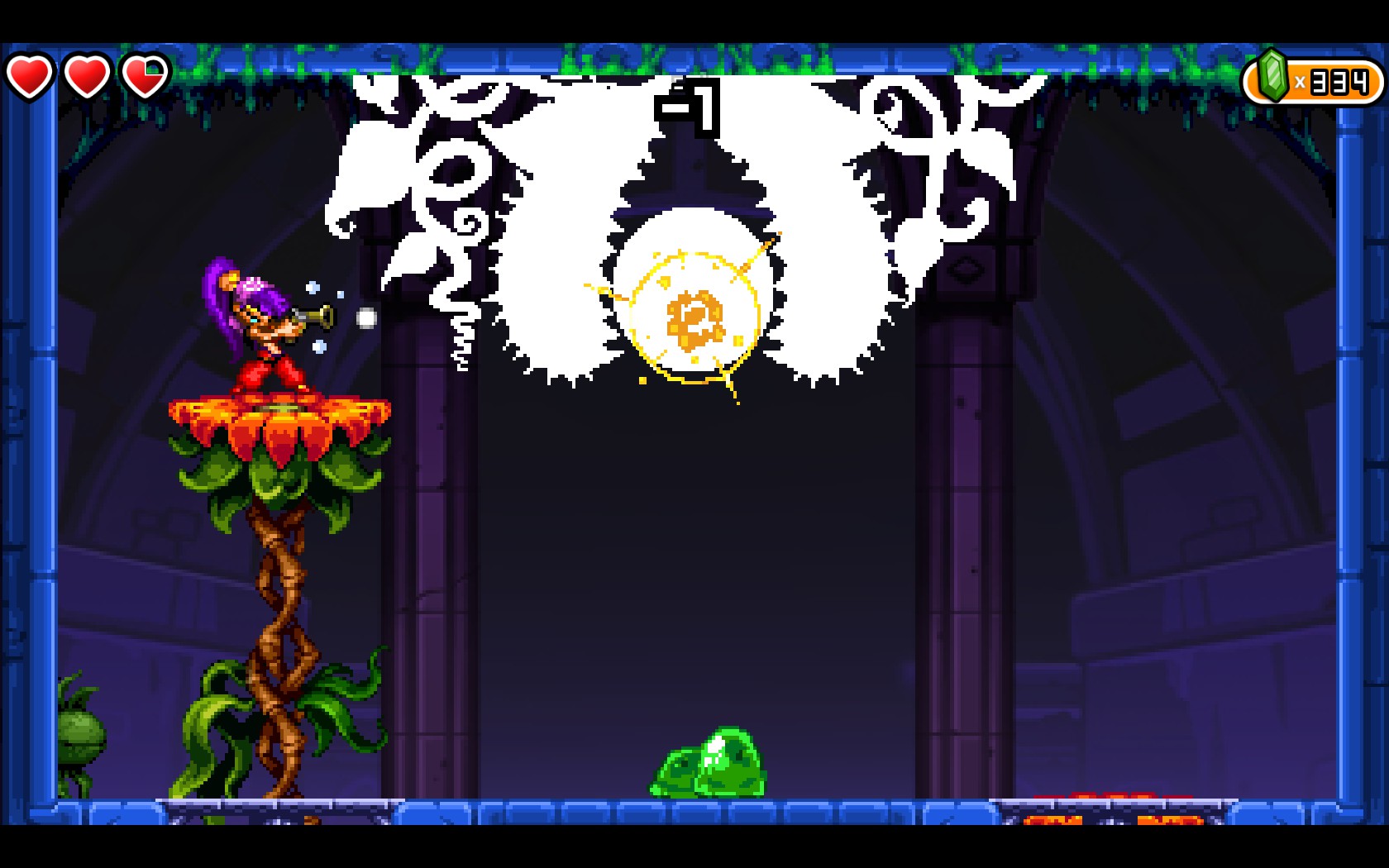 There are also quite a few of the game’s 52 collectibles that I found to be almost irritatingly places, relying on hidden gaps in the walls, or hoping that the player went back to an otherwise isolated miniature dungeon with a new ability and decided, on a whim, to dash into a wall to have something fall out.  None of them have any sort of grandiose to them either, either being heart pieces or a recycled enemy with an incredibly easy to learn pattern, who you still need to fight twenty of in order to beat the game.

The only worthwhile optional upgrades were ones you need to buy, and provide a very clear numeric improvement over other abilities, and Shantae’s new abilities are singlehandedly my favorite part of the game, but it’s a shame they are not used as well.  Dashing through a map and plowing through enemies with the equivalent to the speed booster from Metroid and doing an honest to goodness quadruple flutter jump was an instance where I let out a squee in excitement.  However, so much of the game seems to avoid the fun these abilities offer, and the most fun I got elsewhere was using them to bypass previously explored areas and annoying to fight enemies. 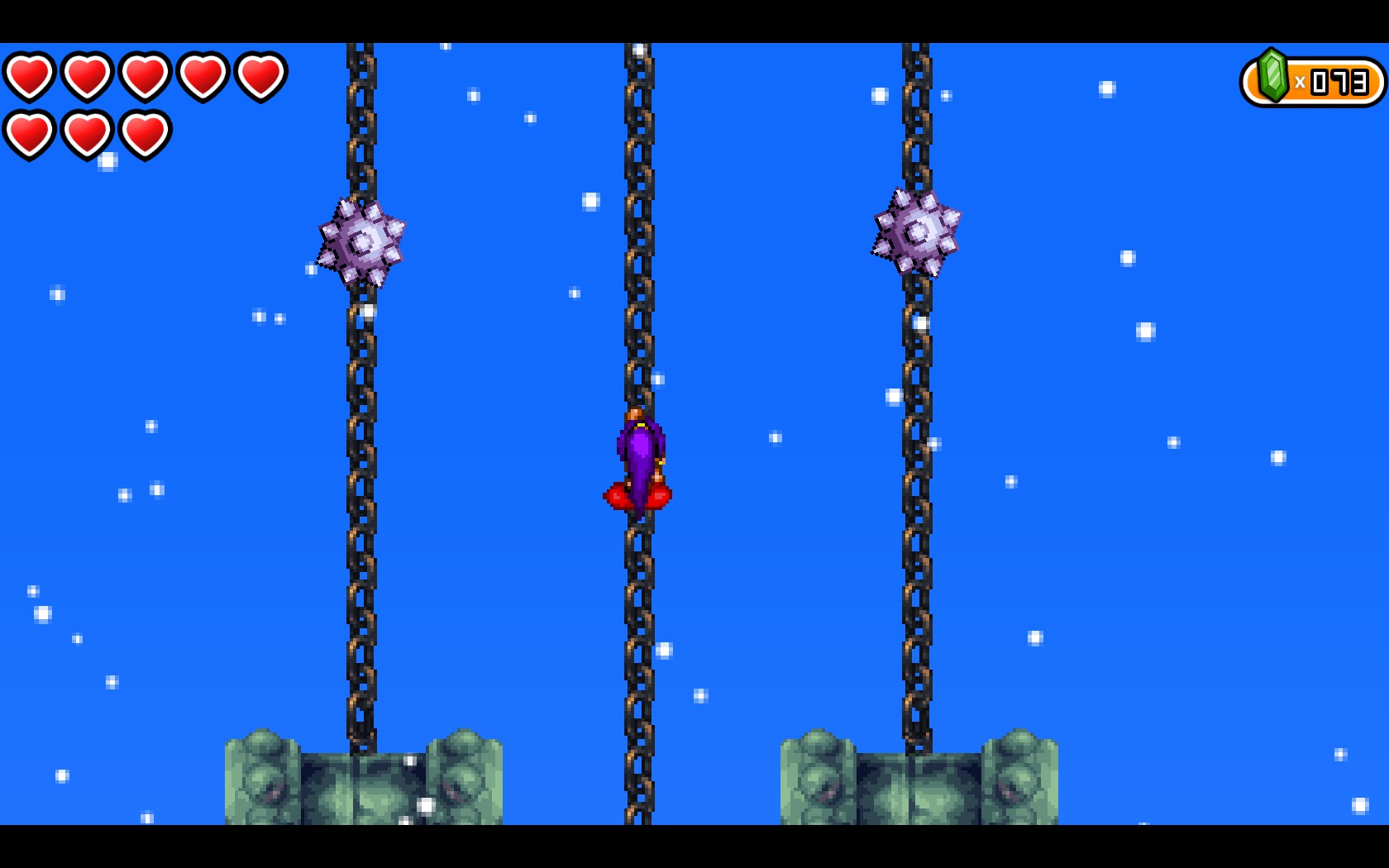 But, through all my irritations about actually playing the game, the spritework of Pirate’s Curse is high quality and filled with fluent animations and very cool looking designs that I would love to unabashedly praise, but there are a few too many thing about it that prevent me from possessing a positive outlook.  For instance, many of the backgrounds in the game are not proper pixel art, and instead look like a digital painting that was shrunk to suit a 3DS’ resolution.  While Shantae herself recycles the sprites from Risky’s Revenge, which is not a big deal, at least until she starts getting new abilities, which are of new sprites that implement a different design.  I’m not even talking about a subtle character change, as she grows a leg belt and purple bandanna whenever using one of her five new abilities. 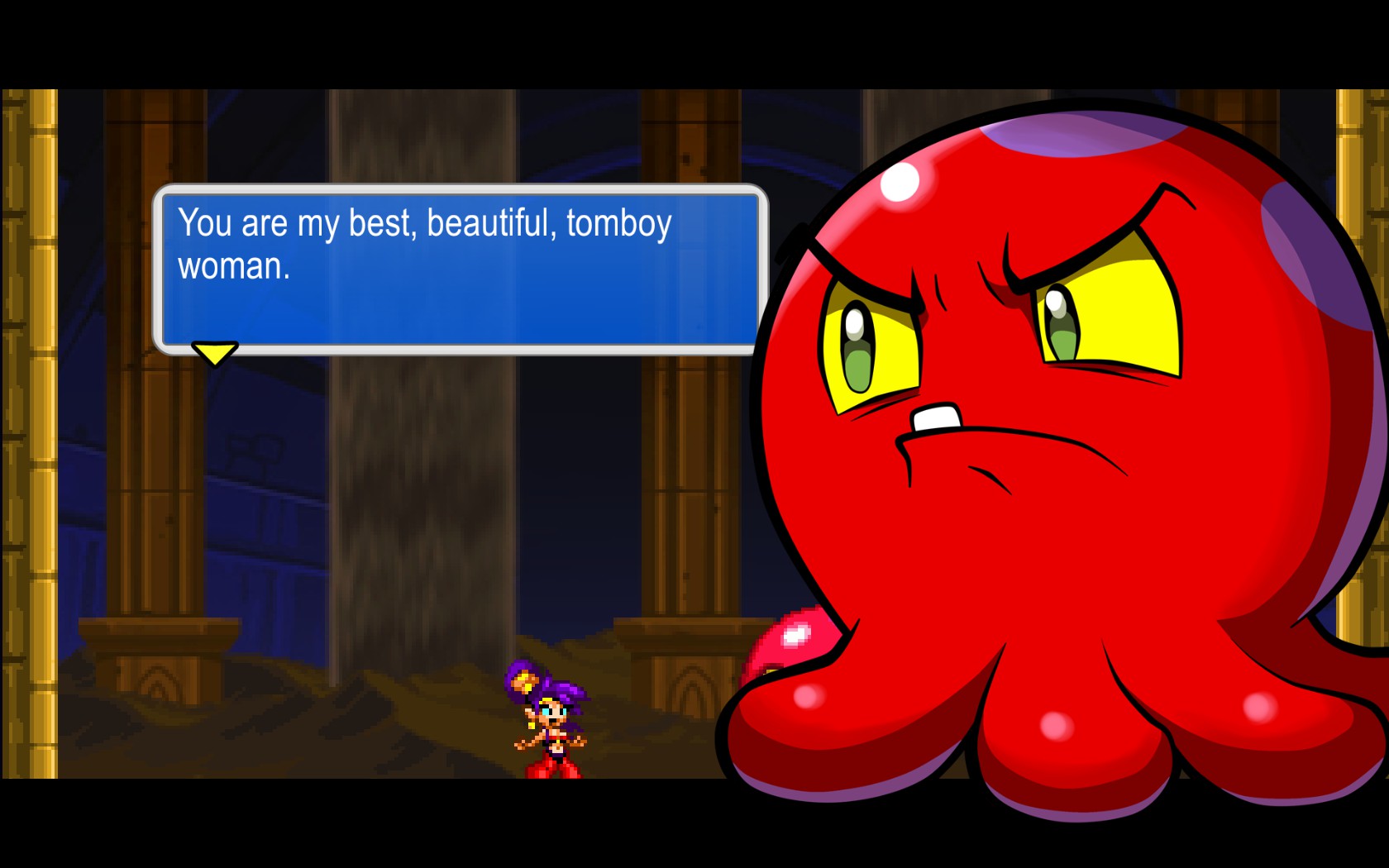 The design does appear in the game, but never as anything more than a brief gag in dialog scenes, so I can only assume that this is the byproduct of poor production planning at WayForward, and insufficient funds to hire a sprite artist to quickly edit the main character’s sprites.  However, based on the number of recycled assets in general from pike balls to gems to enemies copied and pasted with no discernible difference, I honestly would not be surprised if the developers were hampered by a number of restrictions. 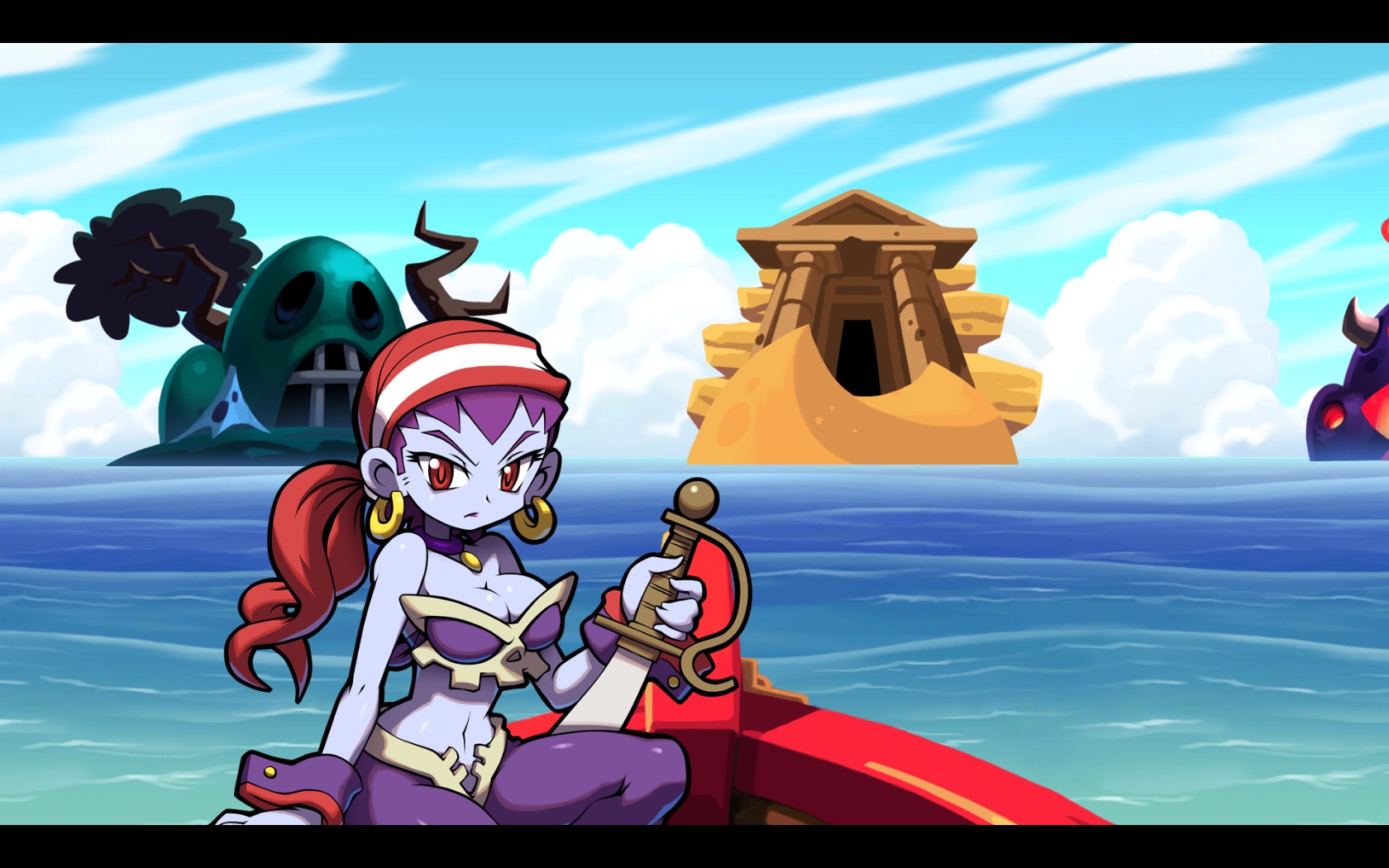 Shantae and the Pirate’s Curse is one of the few titles that I beat and then placed in what I call “The Zeta Pit of Despair” a Steam category that I place any game I simply do not want to be reminded of in.  I did so immediately after beating and uninstalling it, and I honestly want to ignore it and hope that the Shantae game I helped fund will be better.  It’s not a horrendous or even a bad game in the end, but its execution dampers the entire experience greatly, and I honestly am looking forward to it vanishing from my autistic mind, but I know that it won’t.

Solid (7.0/10)
Not the best of its class, but ultimately a good game that may not be everybody’s cup of tea, but proves to be enjoyable despite some difficult to ignore issues.