The idea of somebody going out and picking up a decade old licensed PC game’s sequel, giving it widescreen, 5K resolution, controller, and Mac and Linux support is nothing short of baffling to me.  Not that it is the reason I decided to give this much praised title a go, but it did make the experience more enjoyable as I no longer had to deal with using a proprietary widescreen mod that did not work that well.  That said, this review is only based on roughly twenty-five hours with the game, mostly because I can now tell when I reach a point where my opinion of a game will only grow more and more negative, and I’d rather stop playing while I can still view the game fondly.

Now, my reason for dropping this game was certainly not because of its story, as I felt that the writing, characters, and so forth were by far the best aspect of the game.  On paper it sounds pretty generic.  You play as the last of the Jedi, an exiled sonuvagun who may truly be among the most powerful force users in all the galaxy, and is tasked with bringing order and peace back to the galaxy, or not if you feel like playing that way because of the binary moral choice system from back when they were novel.  Granted, Knights of the Old Republic 2 does have a far more adult look on morality than it may seem to possess at first glance, dealing mostly with kantianism and the idea that good acts are ultimately selfish.  It is certainly an interesting idea, one I like to think I discovered on my own, but I have my doubts that the game would properly explore this near its conclusion.  Let alone allow me to go along with the role playing that conjured in my head, where my paragon of a protagonist was really a greedy, selfish, little bastard who was using everybody they encountered for their own gains and was lying whenever they spoke of selflessness and justice. 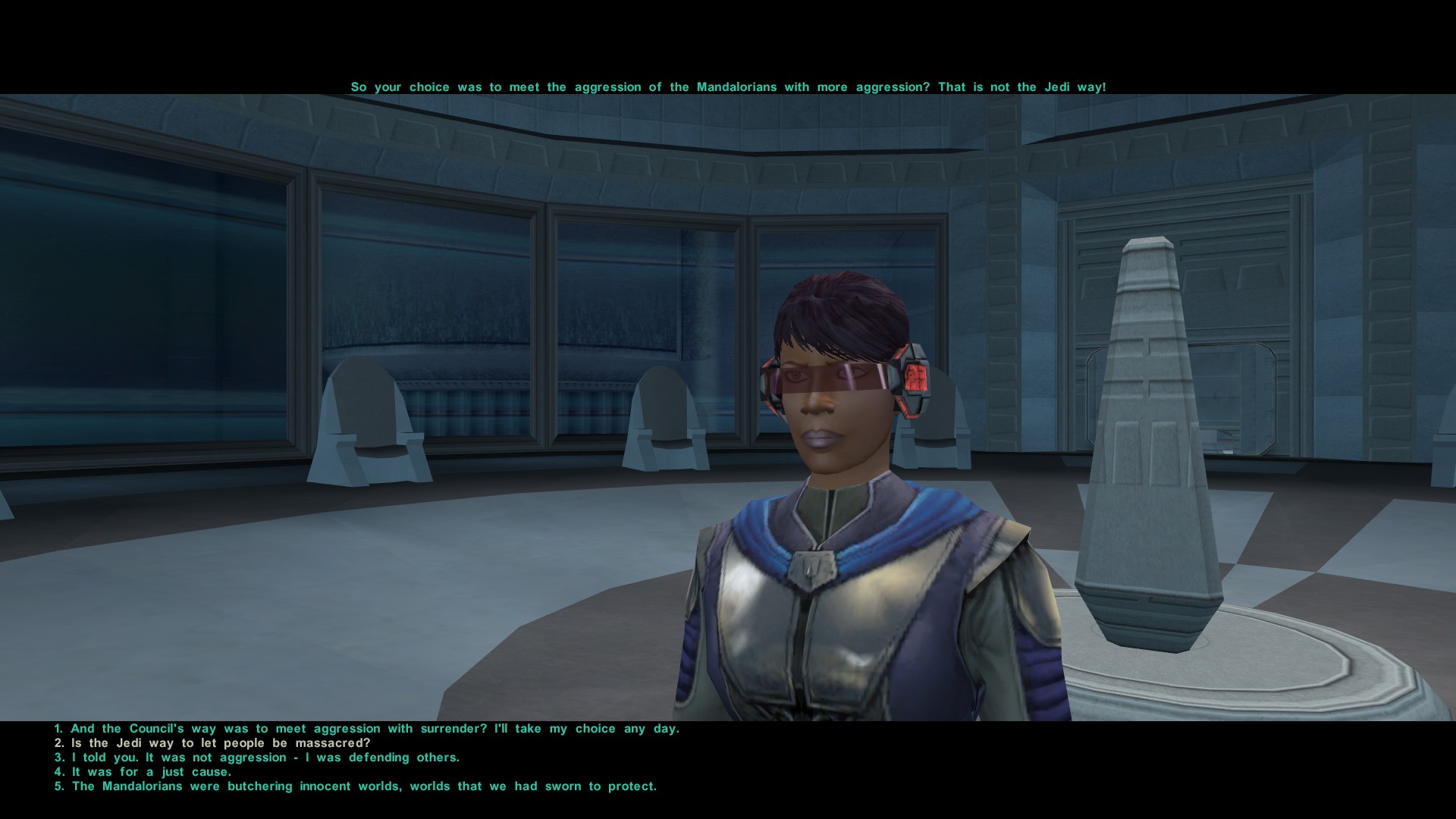 That said, the writing and characterization of your crew was rather spot on, as pretty much every party member I encounter, while potentially seeming bland at first, all held a certain appeal that made me want to get to know all of them and become their friend.  Especially the party member, Keira, who I absolutely adore.  Her dialog is chilling and inspiring, her backstory enticing, and her mysterious nature kept me on my toes whenever I learned everything about her.  Combined with the aforementioned moral exploration, she managed to be the main drive for me to continue on with this game simply because I wanted to see how her character developed over the course of the story. 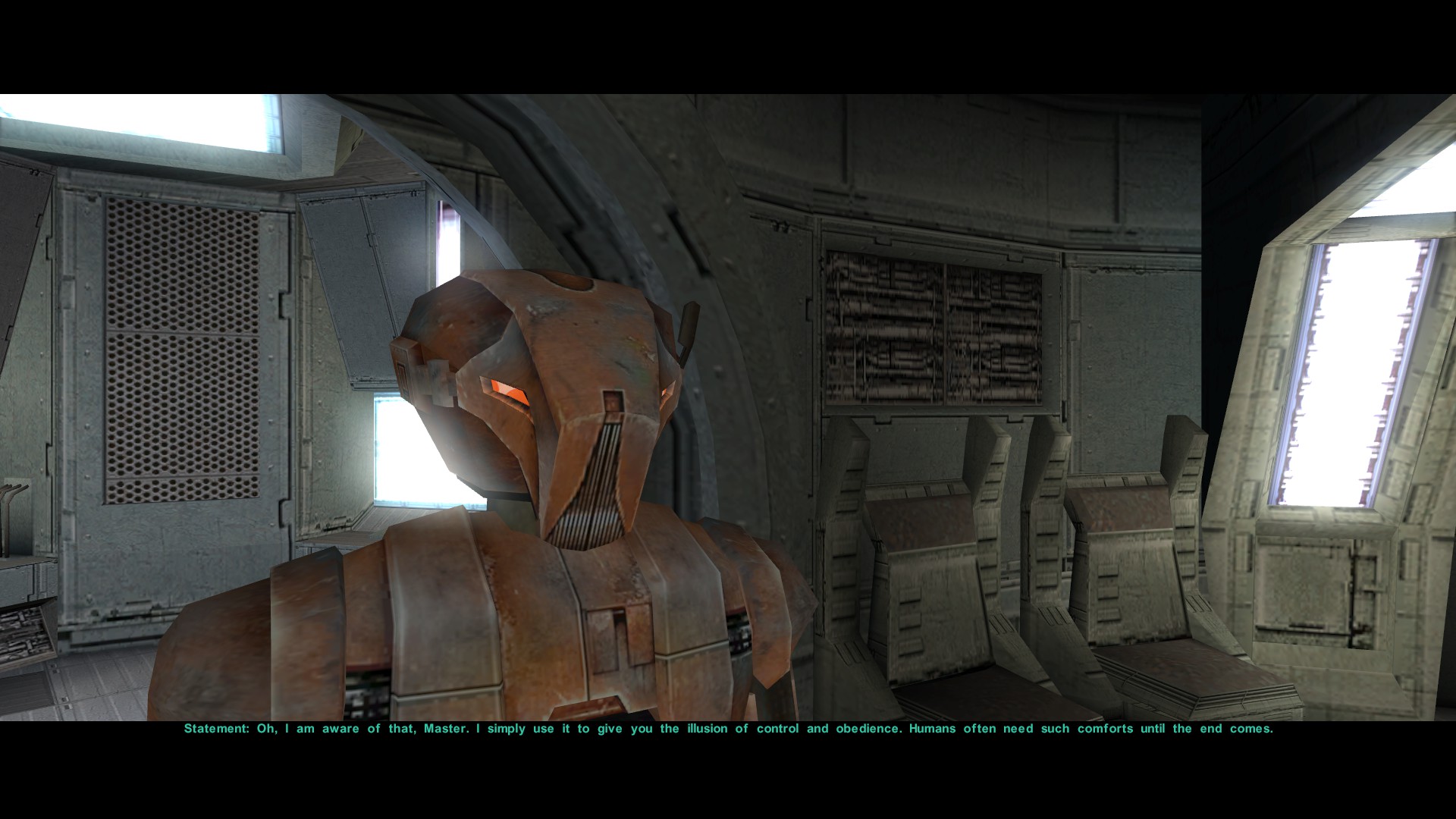 But seeing as how I already mentioned that I dropped the title, and I nearly dropped it several times before, there must have been a reason for that outside of the story.  Heck, the biggest gripe I had with the story was how all of your party members could become Jedis if you keep talking to them, which is more of a continuity based gripe than anything.  No instead I disliked just about everything having to do with the gameplay of KOTOR 2, which, even in a story driven RPG like this, and while playing the game on easy, this still poses a huge problem. 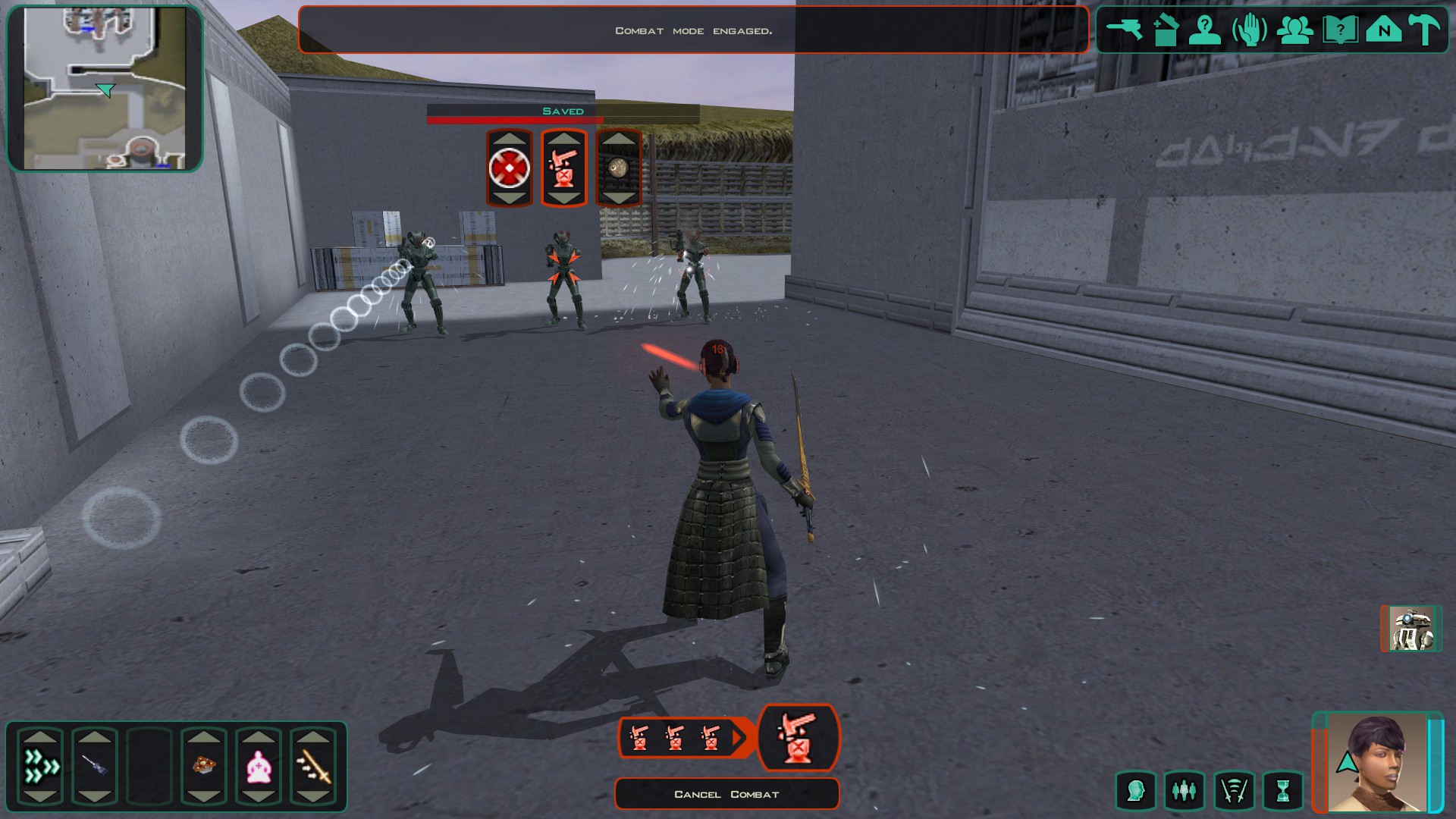 I suppose that the combat is as good a place as any to begin.  You go about selecting a series of moves for each character who, when their turn comes up in real time, enact upon the action, while a random number generation for one to twenty determines the outcome.  In order to select a move, you need to flip up and down on a slot for each sort of action.  Regular attacks, force attacks, passive force powers, explosives, and so forth.  While I feel this is intended to be a simplification of a greater combat system I never felt like I have much control over it based on who I simply never understood or agreed with how the game determined if I hit anything.  Perhaps I simply lack the fundamental understanding of Dungeons & Dragons, which this combat system is based on in some general aspects, but it simply felt like a flawless victory and a struggle filled battle filled with misses was up solely to the random number generator, while I just selected commands at random, not really sure how how they impacted combat in anything beyond a general manner.

This lack of true understanding also extended into the game’s equipment and leveling systems as a result, and I can safely say that managing what grew to eight inventories and characters simply became tiresome.  It’s just a lot of stuff you need to manage between so many inventories, and there is a good amount of pressure and confusion whenever you are given a character skill sheet for a character you do not play as.  I mean, you can if you want to, but that kinda defeats the purpose of the player avatar.  There is an auto-level system, but the recommendations are not very carefully crafted and are the same for pretty much every character.  Or at least the force powers are when there is a third of that poorly laid out skill tree that you would want to ignore.

Going back to the inventory though, things get even more complicated when you throw crafting in the mix, encouraging the player to recycle items instead of selling them, crafting equipment upgrades based on their current skills, and flipping through a menu that is not very well laid out and cannot be presented in any other way.  It’s not a bad system, but combined with shops whose prices for items, for both buying and selling can often be absurd, it really does only makes thing more complicated than they need to be.  That actually summarizes my thoughts on the “game” aspect of KOTOR 2.  Everything from the invisible influence meter to how combat works to the way its dialog trees are laid out, it all seems more convoluted than it should be.  I am half tempted to say that I may have adored this game if it were a visual novel or a far simpler RPG, but sadly it is not.

It would have likely also been cheaper to make, although I am not too sure how much money was pumped into creating the environments and such.  I don’t feel that they look bad by any stretch of the imagination, as I place the title with most sixth generation (PS2/Xbox/GameCube) games as titles that looks pretty good when upscaled to 1080p with some additional anti-aliasing.  However, the environments feel barren after you walk through them once, plus I feel that all the time and effort put in to make these worlds feel like truly different worlds may have not been either enough or the best use of the game’s development time. 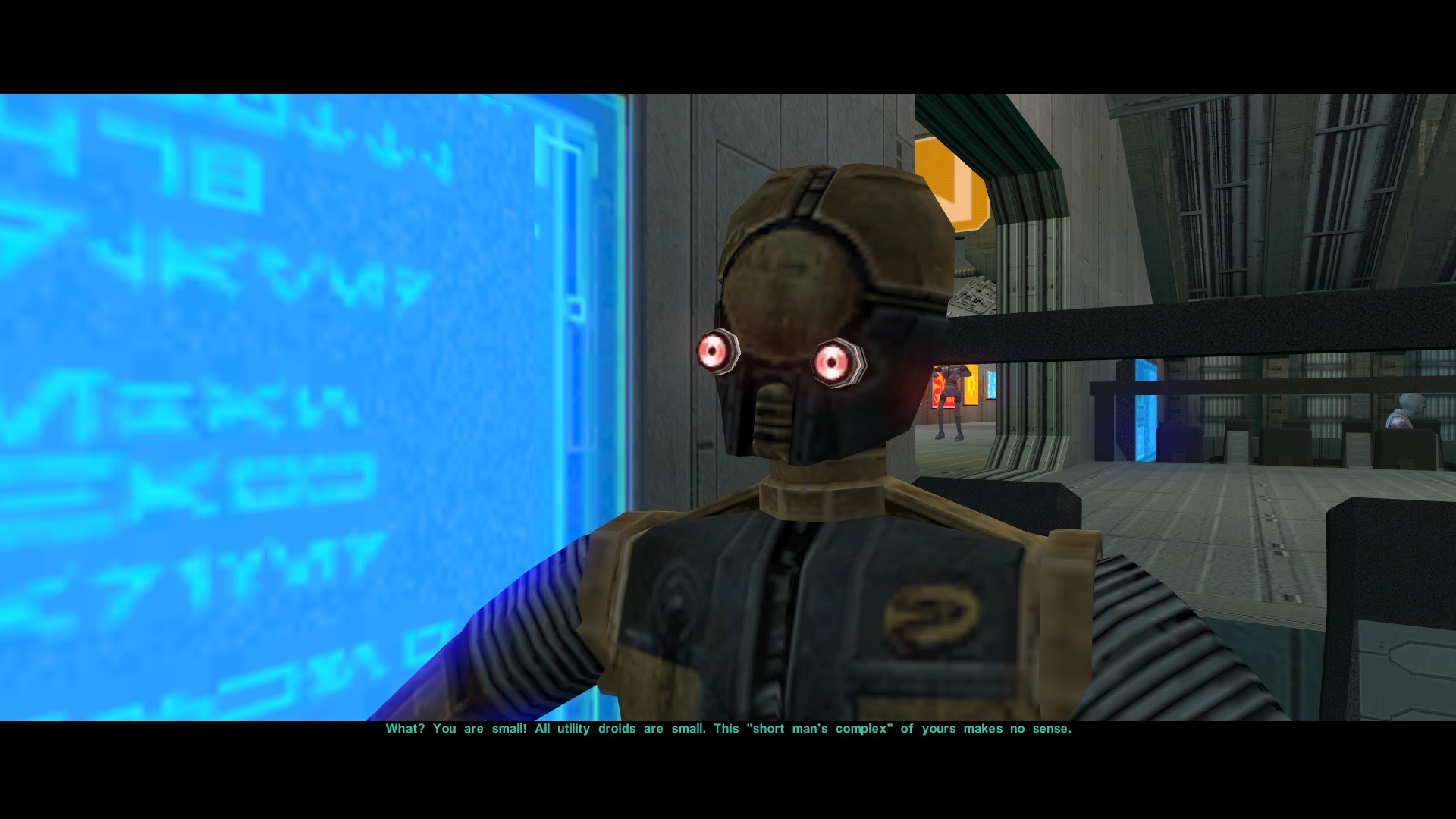 My decision to drop this game certainly did not come easy as I am still very anxious about my decision to stop going through what is a much praised story that I know for certain held quite a sum ro complexity that I did not get to experience.  However, my frustrations with the gameplay were hindering my enjoyment of the story by proximity, and as such I felt that I was not making the most of the experience, and should not continue, lest I grow to detest the game as a whole.  Perhaps somebody with more familiarity and tolerance for this sort of thing could enjoy the game more than I, but as I have grown older, my tolerance for this stuff had sadly decreased.  But I could say more or less the same thing about Planescape Torment, and that game is allotted as one of the best ever made, so perhaps this only acts as another example of my own defective nature as a human being.