I originally planned on opening this review with an anecdote about how the “Indie” movement for the game industry has more or less ended and how the novelty and value of being a game made in terrible personally inflicted conditions means very little unless a publisher picks you up and shows you to the world.  The industry in general has a discoverability problem, and when it comes to the fifty  games released on Steam every week, it becomes all the worse… Anyways, here’s a game made by the animator for Jazz Jackrabbit.

When recalling the plot of Dust: An Elysian Tail and trying to look at it analytically, I run into the unfortunate problem where I cannot seem to separate it from the fact I feel it was something that the game’s writer, director, programmer, artist, animator and et cetera, Dean Dodrill had been trying to tell since he was in middle school.  Refining and reworking it as he grew up, but the base is still recognizable as something thought up by a thirteen-year-old.  It does not necessarily mean that the story is bad or anything, but it acted as a constant reminder to me, especially near the end of the storyline.

As for what the plot is properly about?  It is about a blue animal man who wakes up in the woods with amnesia, and goes out to save the world from a genocidal king with the help of his wisecracking rodent bat, and a talking sword.  There are subplots for minor characters in an attempt to make the world feel more alive, although most characters are dropped as soon as their side quest is finished.  While the minor characters’ development and arcs are kept more or less under wraps before the final section of the game, where a major tonal shift occurs and my beliefs that this story was based on the ideals of a middle schooler intensified.  It’s entertaining, ultimately works, and while I could view its similarities to stories written by or for tweens and baby teens, I actually found it to be something of a, and I try to be very selective with this time, guilty pleasure.

Dust is an exploration focused action platformer with RPG elements, or in short a Metroidvania title, even though I would rather not use that term.  Although, upon doing a bit of research and discovering what exactly were the Dodrill major influences in creating this game, I feel that it is appropriate to say that Dust is a lot like a Metroidvania if mixed with the first two Ys titles.  The townsfolk are nicely added in, but mostly irrelevant to the story.  Combat is mostly won through brute force unless you screw it up.  The world is filled with secrets represented by circles on map tiles that require upgrades in order to get.  And the said remains interesting and appealing throughout despite the lack of creativity with the area’s concepts.  The title thankfully does away with some of the more irritating aspects of the first two Ys titles, namely the grinding and lack of direction, as there is always a checkpoint on your map telling you where the main quest is.  While combat is far more complicated than the combat of Ys II, a game where you ran into enemies at an angle and occasionally threw magic at things, at least in theory. 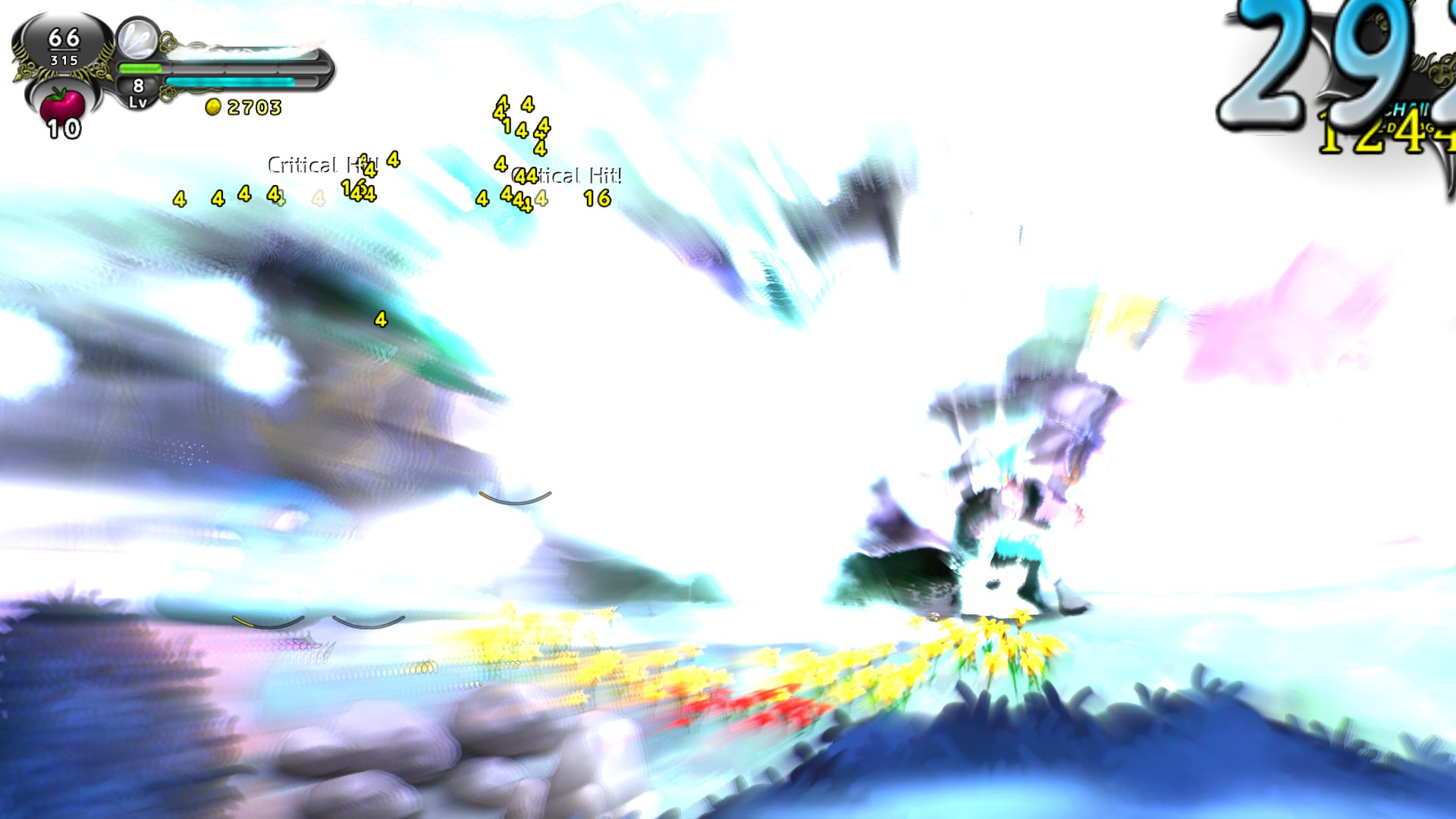 For about 90% of enemy encounters, I managed to win by jumping, letting loose a magic attack, using the aerial spin attack to send the magic flying, while also ramming into enemies while dealing copious amounts of damage to them, building up combos into the hundreds before the enemies fell.  I suppose that this may only be possible on the normal and easy difficulties, but unless the enemies are made substantially more aggressive, I doubt that this dominant strategy would ever not be the most effective way to deal damage without getting hit.  Still, it is fun to fly around the screen with relative ease as flashy lights happen and enemies bounce around, numbers gyrating from their bodies while your combo meter grows ever so higher, and while I could see how this would bore some people, I was still enjoying myself throughout my second and a half playthrough.

Although, I can’t say the same thing about the visuals, as I find the art quality of Dust: An Elysian Tail to be among the most mixed I have seen in quite some time.  Environments are beautiful even when going through pretty humdrum themes, as they all have a sense of personality to them and an evident amount of care placed into everyscreen.  When combat is in motion, the game looks rather incredible as the 2D art and 3D effects blend incredibly well together.  But when speaking to other characters, the portrait art really does bring out the oddities in the character designs, as nobody looks quite right.

It may be the faces, the linework on the animating upper bodies, the clothes certain characters wear or just how pudgy the characters can look at times.  Having played this game twice now, I’m not even sure what exactly my gripe here is.  I can see the intention and potential to be unique here, yet it often looks like an artist trying to find and refine their style instead of a professional product, even more so thanks to how inconsistent it feels when comparing the gameplay, the dialog scenes, the cutscenes, and even the promotional art you see whenever you open the menu.  Dust has the potential to be beautiful, but instead it is far too easy to spy the less polished elements of its world, which is a shame.

So, to wrap things up in a nice little box with a bow tied around it, Dust: An Elysian Tail is a great game that unfortunately has some troubling elements when it comes to just about everything.  Its story could very easily turn people off, its combat, at least on normal, can be won without much effort, and the game fluctuates between beautiful and amateurish when it comes to certain assets.  I would still ultimately recommend it though, as it manages to be an enjoyable journey despite its issues, and one that I can see myself going on every couple of years.  Although, a lot of that is due to how I enjoy its pacing and world exploration, which is half of my criteria for a good exploration focused 2D action game with RPG elements.