Okay, there is a lot to unpack here.  One, Student Transfer is a collaborative visual novel made by the some people over at tfgamessite.com.  Two, the game uses assets ripped from ‘adult’ Japanese visual novels, though it censors the naughtier bits.  Three, this is simply a review of the first publicly released build, after the implementation of a couple patches.  Four, this was made in about three and a half months, which includes pre-production.  Also, I’ve been following this game’s production since its inception, and since it was an idea introduced in the Press-Switch thread.

To offer a blunt summary, Student Transfer is a transformation, mental change, possession, gender swap, body swap, and so forth, centered collaborative visual novel that is as of yet incomplete.  Or simply a TF Visual Novel, if that term meant something to more than a few thousand people.  One focused on its lackluster and lackadaisical main character, John, as he receives either access to a large book of spells or an alien remote, both of which are used to access their own unique transformations and storylines.  All of which tap into a, quite frankly, massive cast of characters, and make use of a very winding string of scenarios that have yet to be, and in all likelyhood, may never be written.

As such, I feel it is best to look at what is currently here, rather than pontificate about where the dozens, if not hundreds of unfinished routes may lead.  The first thing I want to discuss is the writing, which I felt was perfectly fine in regards to basic grammar and sentence structure, excluding a few typos I spied here and there, but I did feel that the story quite often skewed around with its tone and level of detail.  John simply reacts to being a woman, and describes the feeling of being in their bodies, with a different level of detail depending on the route you take.  Sometimes it is an exhaustive analysis to the mental battle going on in John’s mind as he fights mixed messages from false memories and his body’s desires, but there are a few times, most of them along the Jane route, which really don’t give the specific transformation the gravitas they deserve.

On the note of minor faux pas, there is also quite a notable problem with names in this game.  From the simple volume of character to the fact that so many of them have similar names.  With Katrina, Kiyoshi, and Kyoko, all being part of the same group, a character named Jack Mallory to compliment John, the protagonist, and a pair of unrelated characters named Connie and Carrie.  On top of this, many of them contribute little to nothing in this build, and as such, it is very hard to keep track of who everybody is.  A character guide would be stupendous, along with a flow chart if only so I didn’t feel compelled to create my own, which you can find at the end of this review.

However, by making said flowchart, and going through every potential route and seeing the differences that came with each decision, I have to say that I really do not like how a few routes close in on each other after your make certain decisions, or have minor changes applied to them while being effectively the same scene.  This happens twice, in both the murder mystery and twin routes, where a few minor, and in my opinion, needless decisions that very easily could be removed at the expense of some of the dialog.  Heck, I’m pretty sure there are twelve alternative paths to the as of yet unfinished Mina route. 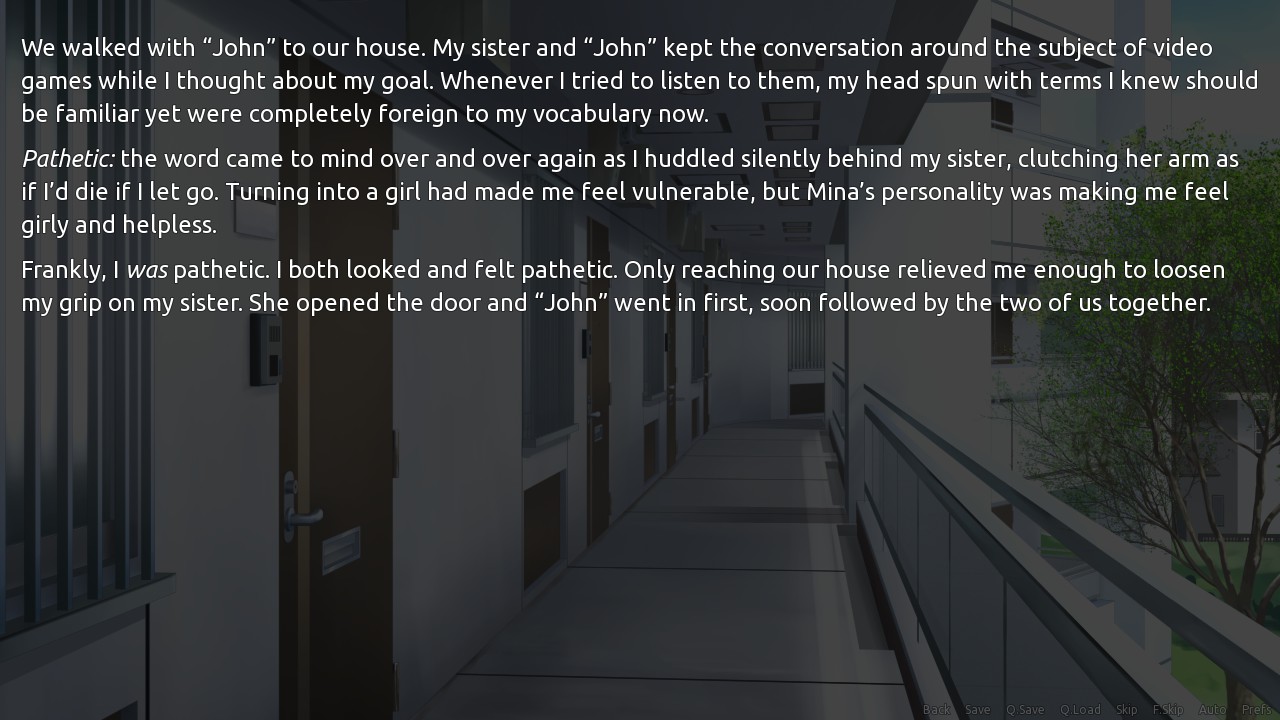 There is also an odd trend of utilizing a black screen with text on it in order to describe events that the developers don’t have access too.  I understand the struggle, as it comes with recycling assets from a variety of other visual novels, but I couldn’t help but find it to be less captivating and interesting than having something to represent a background, or simply have a character sprite in its place.  On that note, the mismatch of character sprites can look a little jarring at times, as is unsurprising, but I feel as if some characters, namely John himself, have few too many expressions for them to be a very viable protagonist.  There simply are not enough sprites for him to properly convey emotions, and it can be a little distracting as such.  Although, since male sprites from these sorts of visual novels are far and few between, I’m assuming this is the best the developers could find.  Not that it really helps me warm up to the guy. 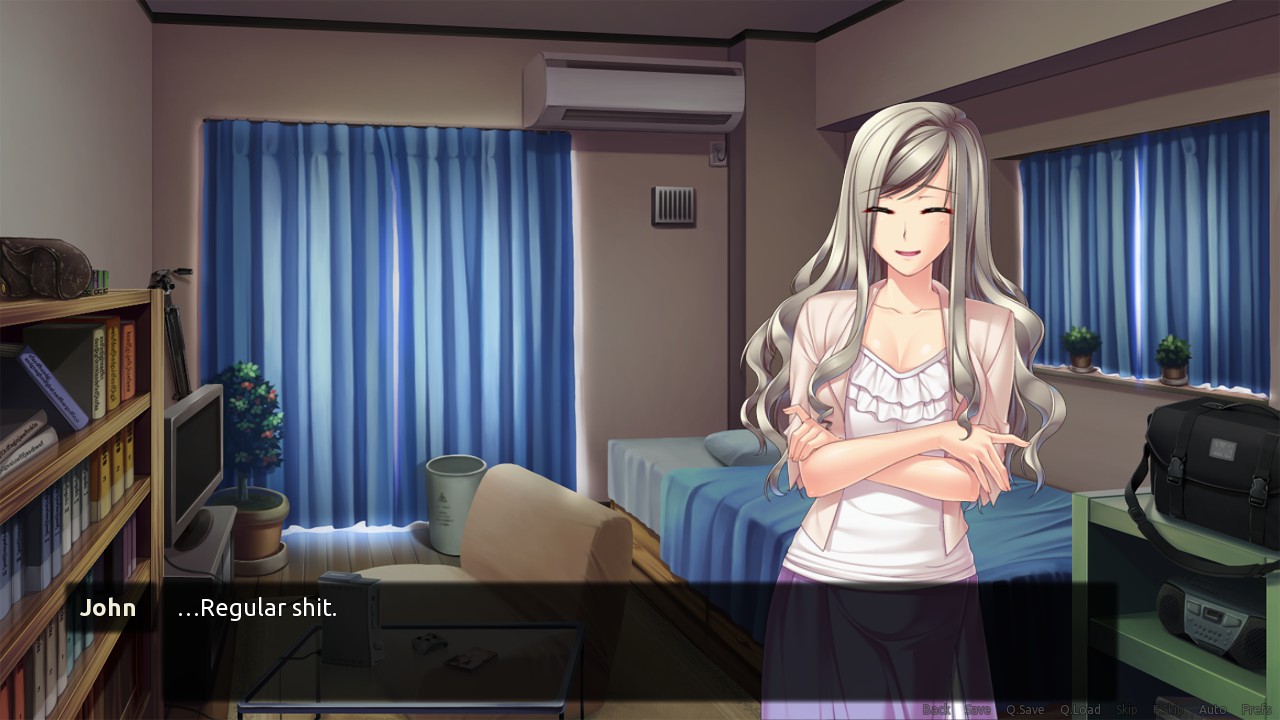 As a protagonist, John is often a bit too boring and unappealing. He stays up until 3 AM playing video games, ignores his studies, and never seems to have any real ambitions rather than his own enjoyment.  The introduction portrays him as an average guy, but he really strikes me as more mediocre than anything, and not just because of all the foolish decisions you can make for him.  He also is a little inconsistent with his vocabulary, as I rose an eyebrow whenever he used a term like kafkaesque, dour, or ebb.  Combined with his eye-rolling adoration of bacon in the introduction, he strikes me as the most lopsided and least appealing of all the characters.  Likely due to all of the writers involved in this project.

Student Transfer can often fight against these shortcomings and become something that kept me on the edge of my seat, wondering where the story would go next, and what sort of transformations would follow in suit. It can be captivating, and while there is not a lot to choose from now, there is a framework in place for a series of engaging and entertaining transformation centered stories.  Assuming the creative team has the ability to keep building on what currently exists, I’m sure that this will become a compilation of interesting, diverse, and well told tales focused on the more sophisticated elements of the genre it explores.  Which is actually quite comforting, as I had worries about the game being little more than a crappy fetish fueled and pandering masturbatory aid.  Thankfully, it isn’t.