A few months ago, I reviewed the first chapter of MangaGamer’s retranslation of the decade-old Doujin darling that is the Higurashi series, liking it quite a lot, and choosing to dedicate myself to see this series through as it gradually releases over the next few years. Once again, I played the game using a fan created mod that adds in new visuals, changes the aspect ratio, and gives the game voice acting, all of which were from a PS3 compilation of these games, but not the PC version. You can find the mod here.

As one would naturally gather from the ending of the first chapter, Onikakushi, Watanagashi is not a proper sequel, but is more akin to a retelling of the same story up to a point. Keiichi Maebara, Rena, Mion, Satoko, and Rika are still a group of carefree youths enjoying the early summer days of their humble lives in the rural village of Hinamizawa. Passing their time with well paced and intense renditions of simple of classic non-electronic games that engaging on their own to warrant an anime or manga series. But the carefree and silly antics between the friends gradually comes to an end after Keiichi discovers a dark secret about this town around the time of Watanagashi, the cotton drifting festival. Something sinister occurs, and the genre flips from what could be called a slice of life into a psychological and supernatural horror fueled mystery in the form of a kinetic visual novel.

I could use that exact same description for the prior entry, but Watanagashi is an entirely different story, a different sort of horror, but one that also builds upon and expects the player to be familiar with the first installment. At least, that’s what I would assume. Assuming they did not choose to start with chapter 2, the player already knows about the mysteries surrounding the town. They read about the deaths of these characters and they are familiar with this world. They don’t need to be reintroduced to a pleasant rural village, since they already know incredibly messed up it is. It really makes the first few hours drag along, and while the lighthearted and silly antics are humorous in themselves, and help establish to a crucial tone, they are too plentiful. 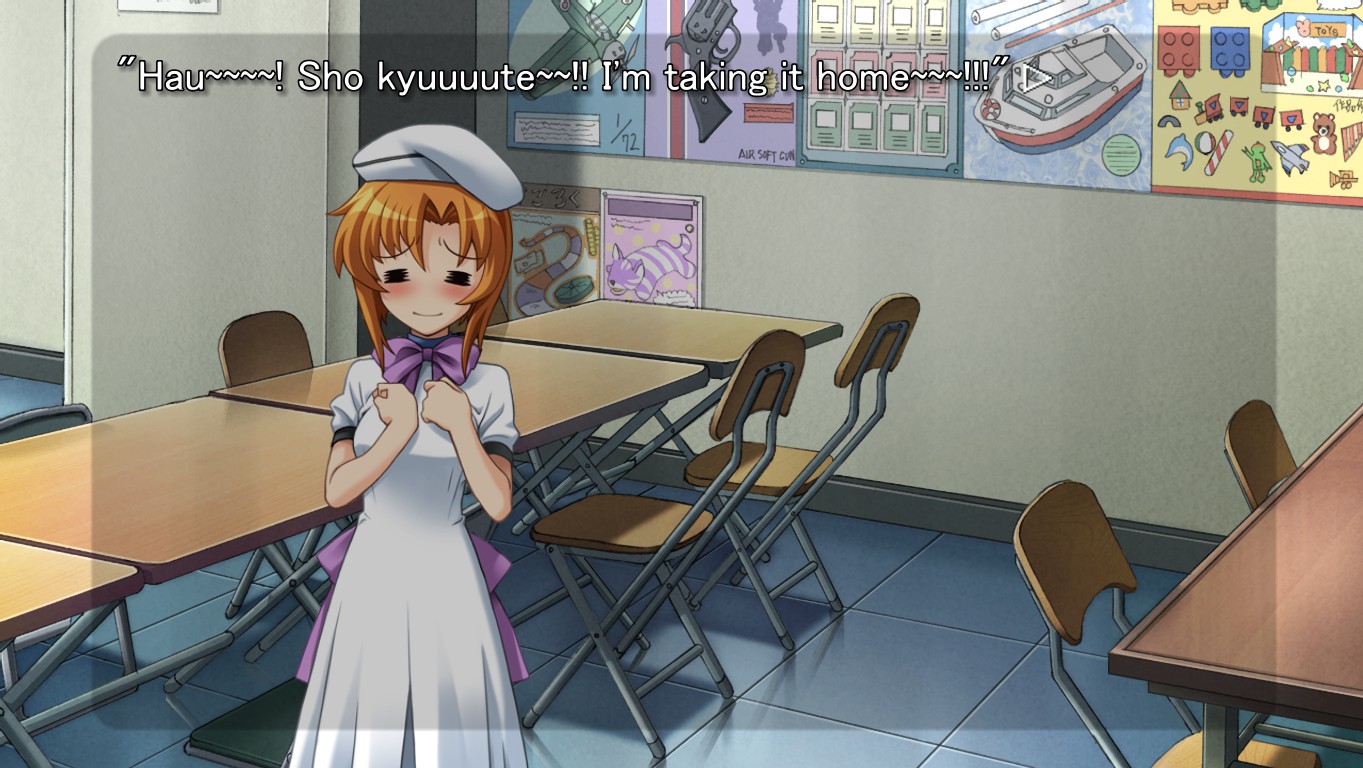 Pacing in general is rather slow during the first half, as exemplified by the introduction of Shion, Mion’s twin sister. Her subplot is centered around Keiichi choosing to believe that she is not a person, but merely an alter ego for Mion, a baseless assumption for the most part. He proceeds to refer to her as Mion and specify how she is simply a different side of her personality in an incredibly condescending manner. All for plot progression and character development that could have been condensed in a fraction of the time. But then there would be less of a scantily clad waitress, which would be unacceptable. 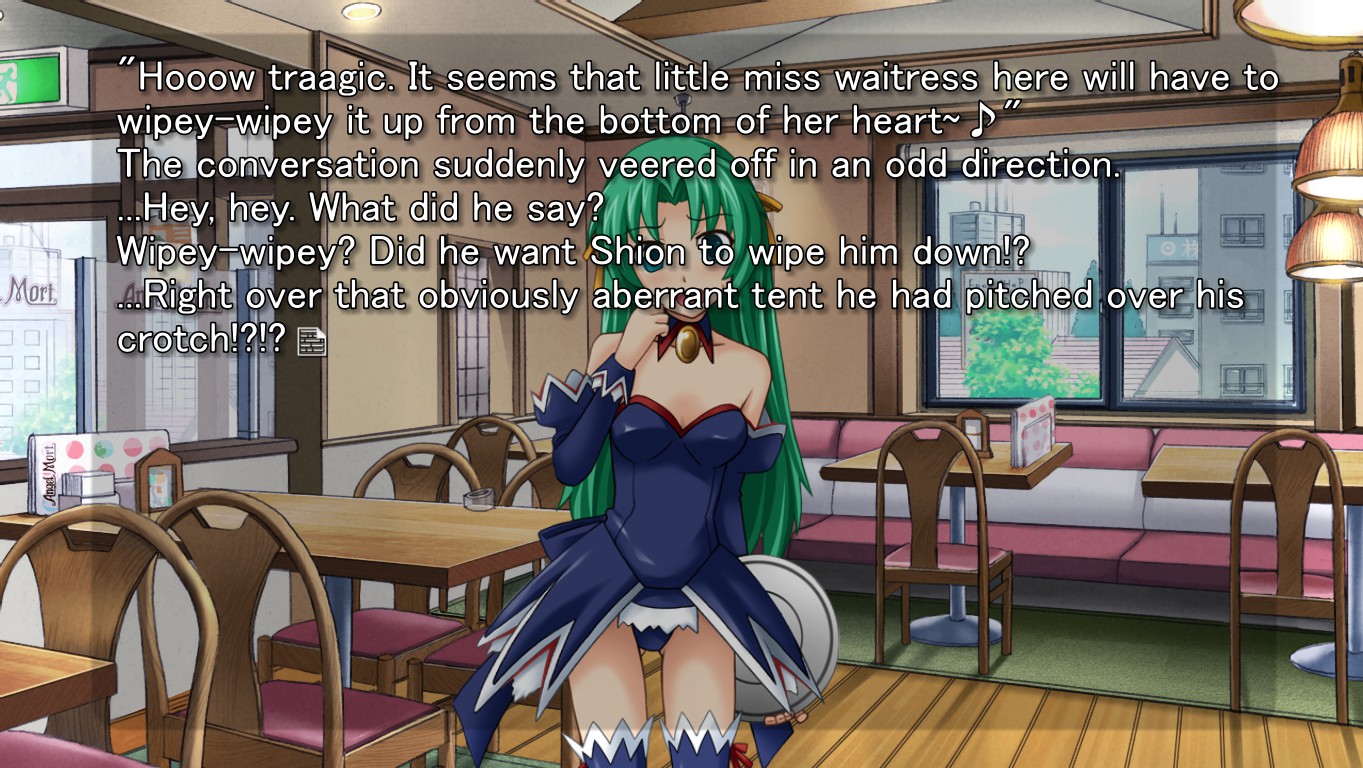 On that note, Onikakushi had its own share of fan service with lolis wearing cat ears, Rena going through the same subroutine whenever she saw something ‘kyute’, and general semi-sexual fanservice. In Watanagashi, that is taken to another level with Keiichi manipulating schoolboys so they can satiate their 8-year-old libidos, nosebleeds so plentiful I lost count, and a scene with an otaku who tries to get Shion to clean cream off the crotch of his pants. I understand if these exist to satiate the otaku audience this game was originally marketed towards, but as they stand, they are annoying, unnecessary, and gauche scenes that belittle where the story eventually goes. 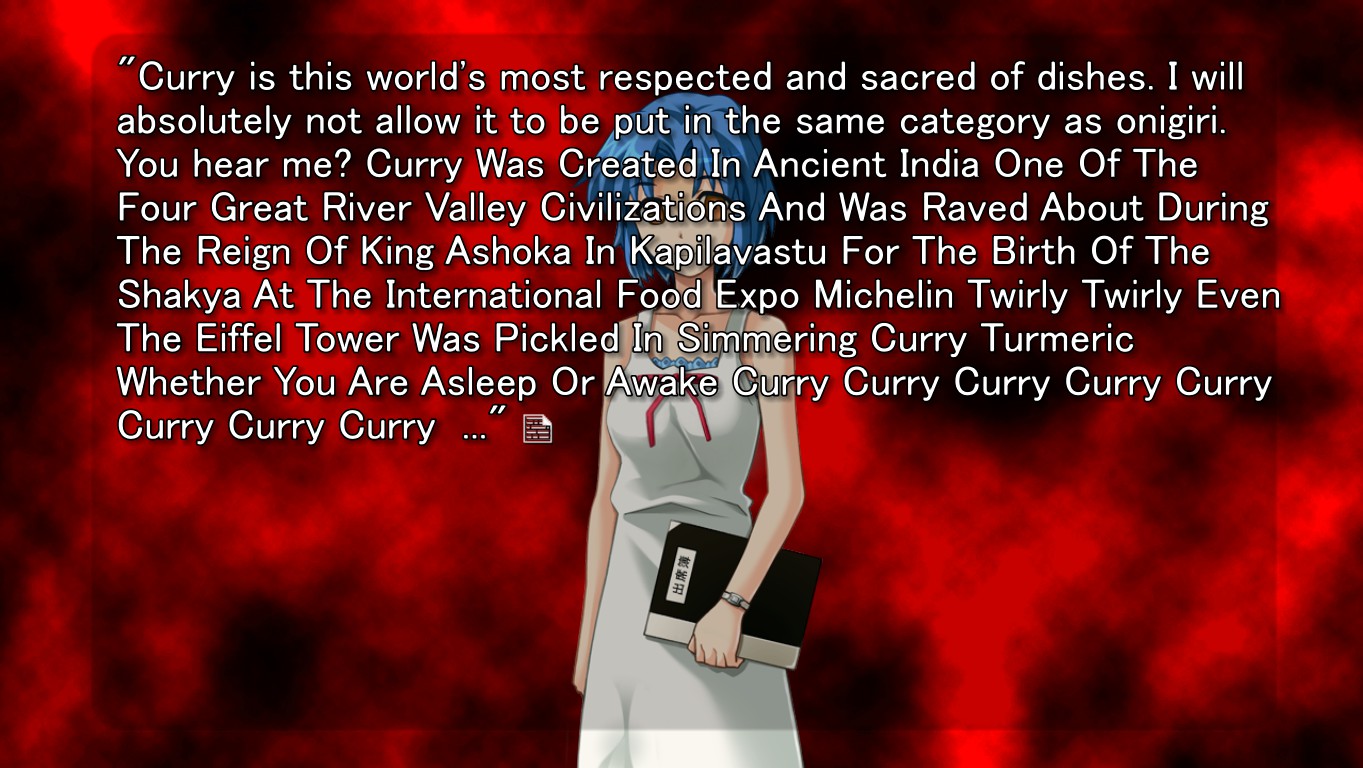 Once the story gets to the titular event of Watanagashi, Keiichi uncovers something he should not, the murders begin, and the story takes a less horror fixated turn in favor of a mystery with its share of murders, deception, lies, regret, and general unease. The backstory of the town is generously applied, painting a far more vivid view of the town, and it feels more like an evolution over the last chapter. At least until the story nears its conclusion, and feels the need to take a relatively simple plot, still rich with uncertainties, and topple a few more on for good measure. Meaning a bunch of eleventh hour twists are added onto the story, most of which amount to nothing, and are simply sequel hooks. Except for one that is used to justify the actions of the murderer. That one is a wafer thin justification isolated to this story.

The script itself is competently put together, but there were more than a few odd wording choices littered throughout the game. There were also several errors involving spaces and punctuation, but it’s likely that those are from the mod. Then there are the ellipsis. I understand the use of adding three periods to the beginnings, middles, or ends of sentences, but it gets absurd when every line begins or ends with an ellipsis, or you have a string of ellipsis to emphasize how long a pause is suppose to be. Even if this is how the original Japanese script was like, some things should be changed in localization, and this is one of them.

I feel no hesitation in saying that the original artwork used in the Higurashi series is bad. The proportions are wrong, everybody looks like a doughboy, and the general color scheme is not very pleasant. The blurred photographs of the background do not gel well with these caricatures and the decision to apply text over the screen makes these visuals little more than an afterthought. I certainly do see an appeal to the art style, you could say that it reinforces the lightheartedness of earlier scenes by being cute, while simultaneously working well with the more horrific moments of the story by being drawn in such an abnormal way. Or even if you disagree with that, the original art certainly has something to offer that both sets of the modern anime-esque sprites lack.

The other feature the mod added to the game is the Japanese voice work, which naturally adds a lot in a ‘sound novel’ such as this. It adds another layer to every main character, bringing them to life in a way that simple text is incapable of. As for the music, it gets repetitive after you hear the same song applied to evoke the same emotion for the umpteenth time between the two games. There are some new tracks used to counteract the recycled one, and most of them sound like low-fi renditions of rather striking and dramatic songs, ones that are far louder than the rest of the tracks. A shame considering that the soundtrack is quite good on its own. 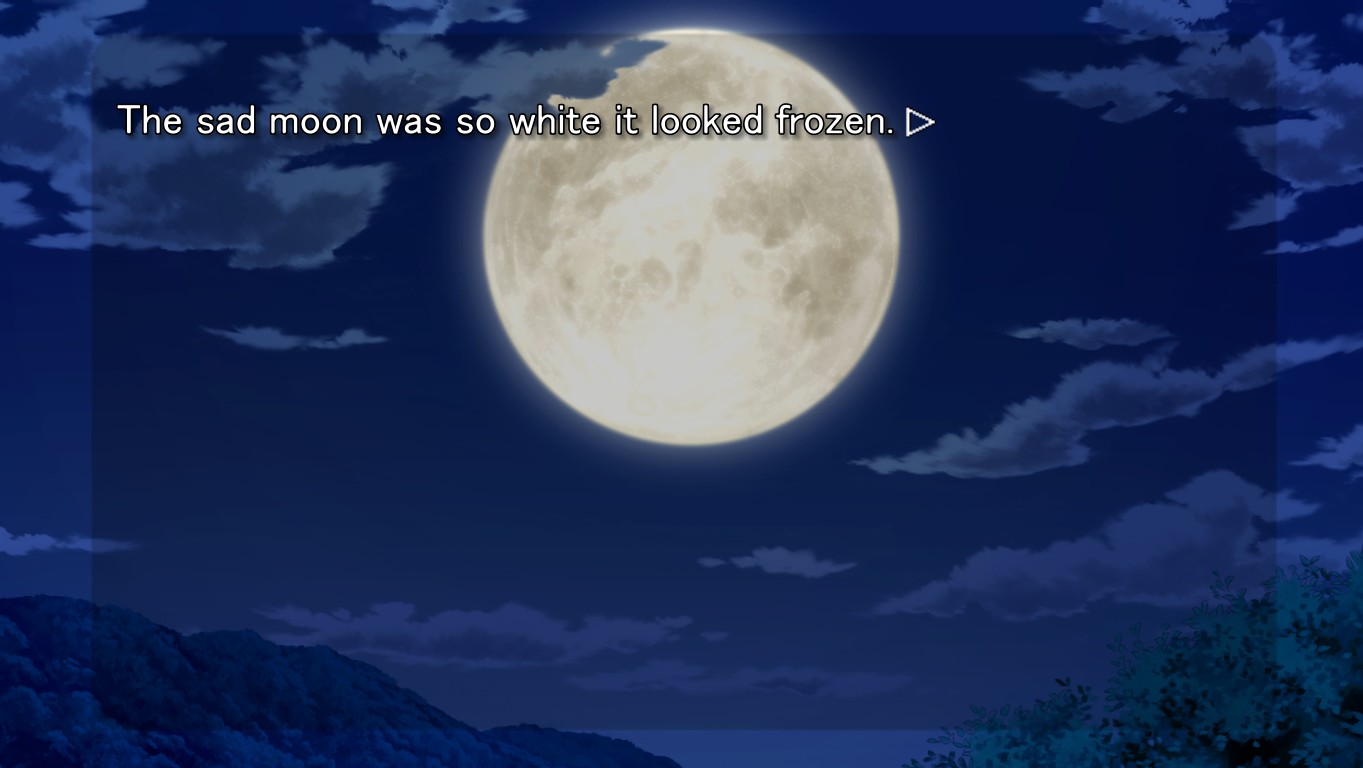 Watanagashi is still a quality and effective horror mystery, perhaps more so if viewed as disconnected from its predecessor, but there are enough fumbles and odd decisions to make me hesitant to put the utmost faith in this massive series. That said, I’m the one who declared that they would go through this series, and I will continue down this path whenever the next chapter is translated and a dedicated fan creates a mod connecting every line of spoken dialog to each written sentence.