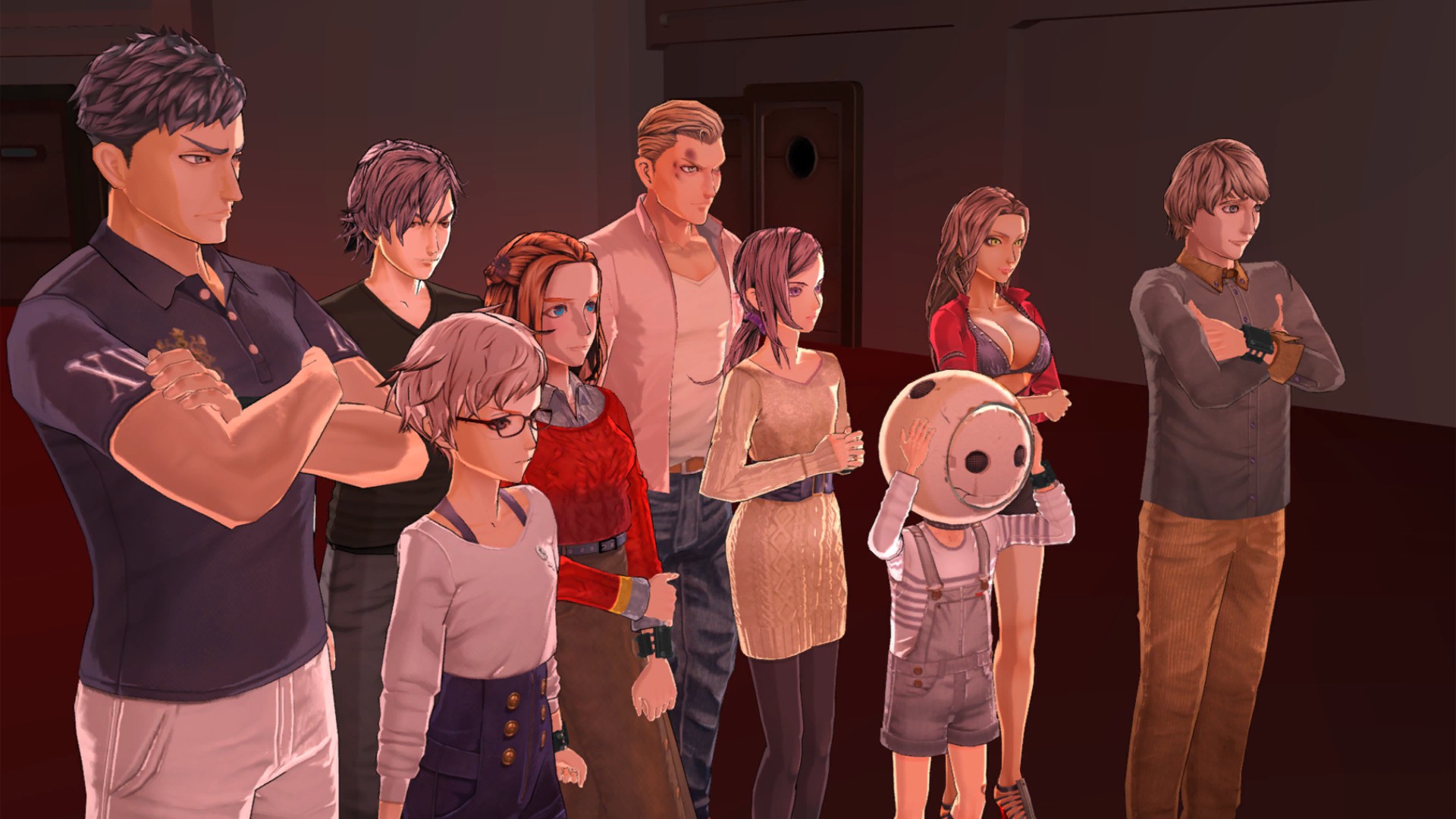 Well, it’s finally here.  After 3.5 years of anticipation, and a second playthrough for both 9 Hours, 9 Persons, 9 Doors and Virtue’s Last Reward, the conclusionary chapter of the Zero Escape series Zero Time Dilemma is finally here.  I already spoke of my love for this series, so without further ado, let’s jump right in.

Conceptually, Zero Time Dilemma fits right in with its sister titles, being a mystery driven story with divergent and interconnected paths involving a group of people locked in an isolate facility, imprisoned by an enigmatic figure known as Zero.  Who in turn forces a group of nine people into playing a strange game centered around murder, with that emphasis greater in this iteration than any other.  However, the very structure of the game differs greatly from the onset, as the story does not follow the group of nine trying to tolerate each other for the majority of the game, and instead groups characters into pairs of threes to allow for greater complexity between them, and puts the player in character of who to follow.  At least for the beginning and middle portions of the game. 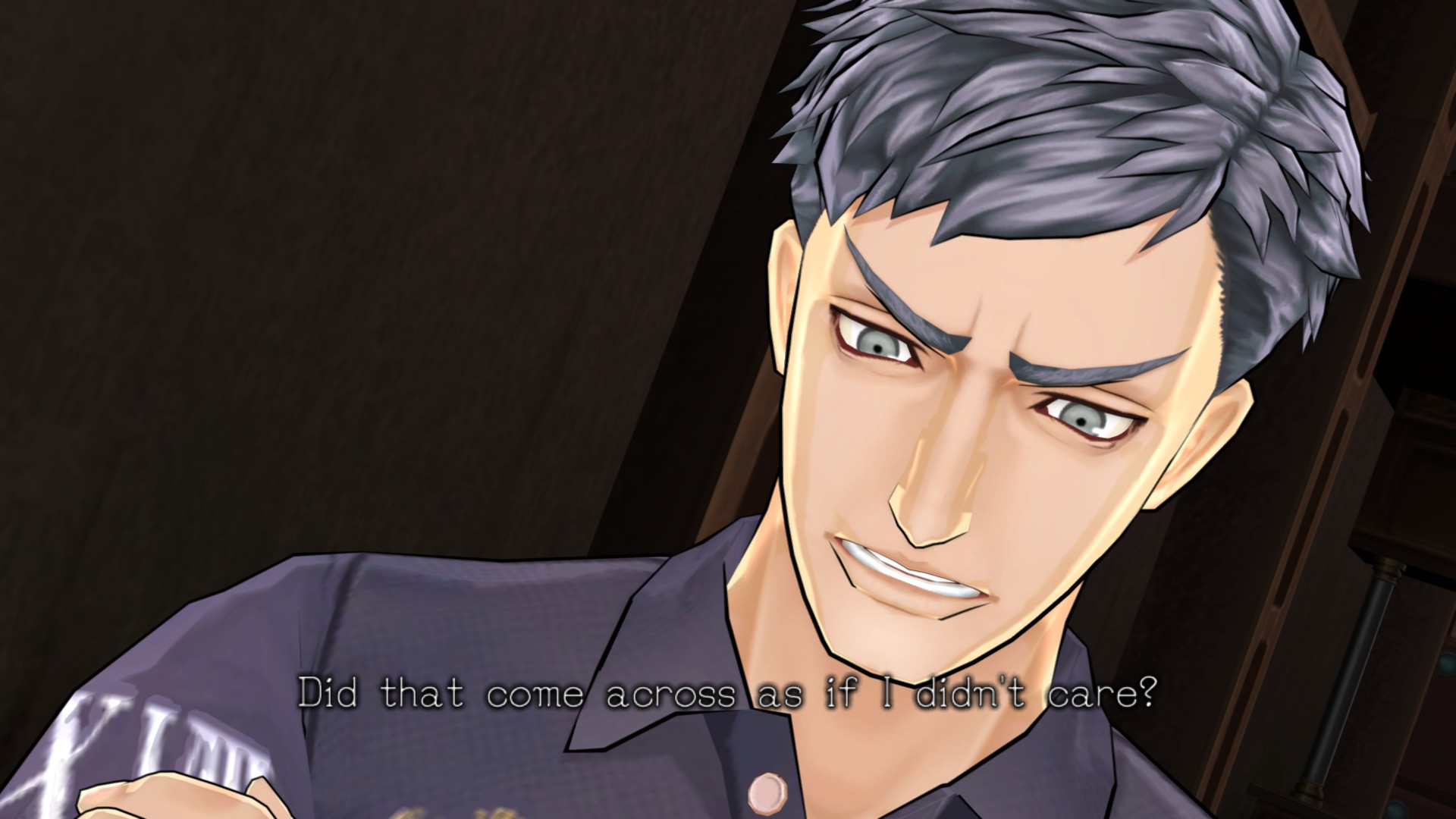 You see, Zero Time Dilemma has a very atypical structure for a game, and after going through an introductory chapter for every character, you are asked to go through a variety of story fragments that all represents scenes from the possible futures, each based on what the player chose in the beginning chapter.  Yes, the time travel elements are worn on ZTD’s sleeves, and allow for the player to so much as jump from the starting point of one timeline to the actual end of another if you happen to choose the right timeline.  You cannot really tell what timeline you’re visiting when you choose these segments though, although having a general shape to match on the flowchart can help, which allows for the story to progress itself in a seemingly random way, which I don’t really see any benefit to.

Nothing is really gained by jumping from one timeline to another like this, other than needless complications.  As you will need to later piece together which timeline is which, what happened in each of them, and who died in them.  Something made even more confusing once the space time continuum is kicked in the pants part way through the story.  On that note, this nonlinear quantum leaping effectively ends near the 75% mark of the game, where the story fully embraces its time shifting nonsense and has the characters bunnyhopping from various realities, picking together information and ideas at their own pace, and clearing all possible futures in order to find the ideal one and, quite simply, discover what the heck is going on here. 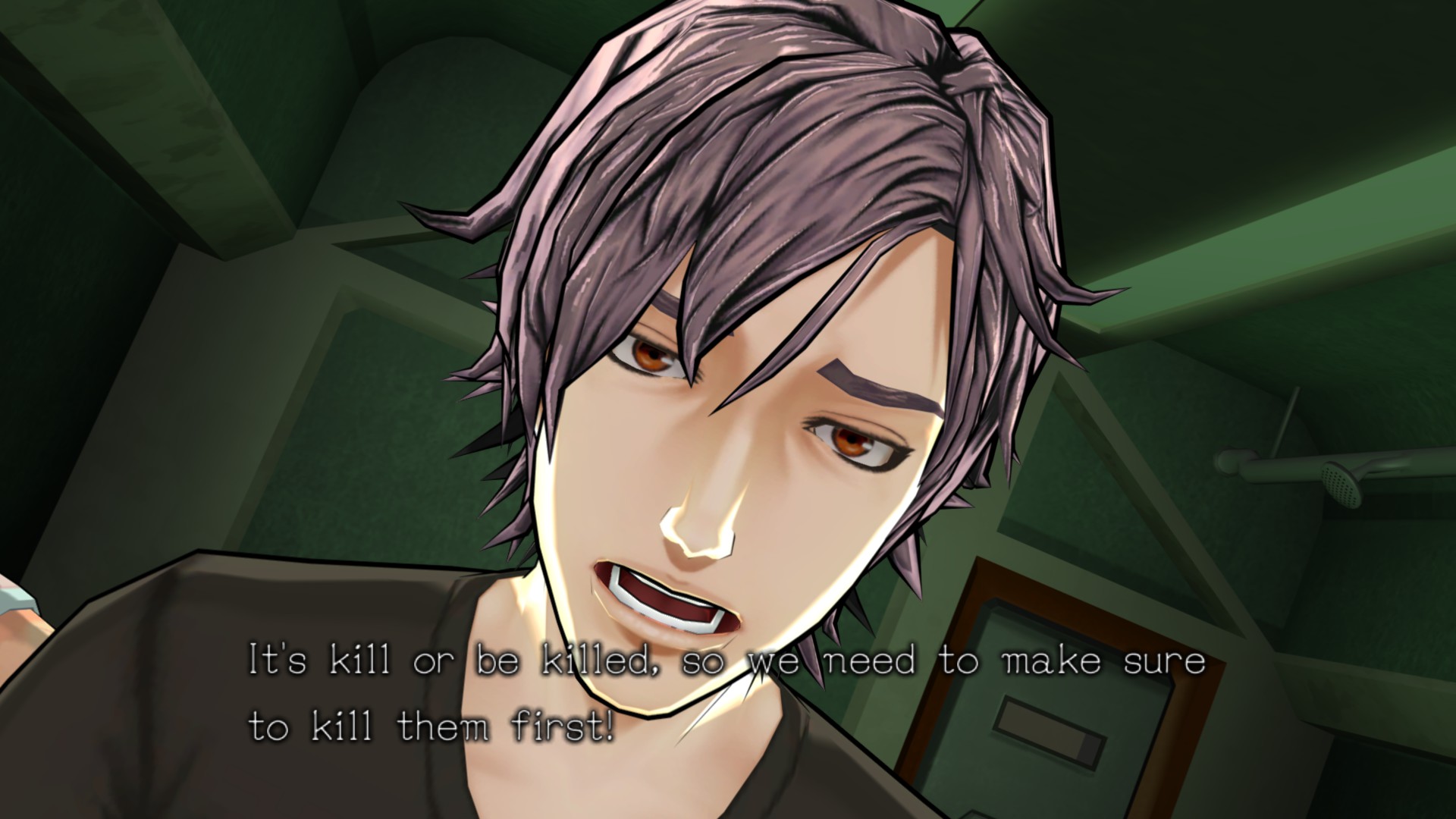 The ultimate answer to that is one that I find to be satisfactory, and quite interesting in several ways, yet lacks the same circularism and cohesiveness that I was honestly expecting after the in-depth and detailed conclusions that accompanied the end of the prior titles.  Here, in the finale, the last that will ever be heard of this series, it really feels like the developers had a deadline to miss, and couldn’t get absolutely everything they wanted into the ending, such as a final instance where the all the intricacies of the plot were properly explained to the player.

I paused the game for ten minutes and wrote down how everything in this game, in this entire series really, ties together, explaining how every character was used and what role they served in the story, and it was probably the best moment I had with Zero Time Dilemma.  As well as one of the greatest moments I ever had while playing a game.  Period.  And it was done while the game was paused, while doing something because the game didn’t do it for me… 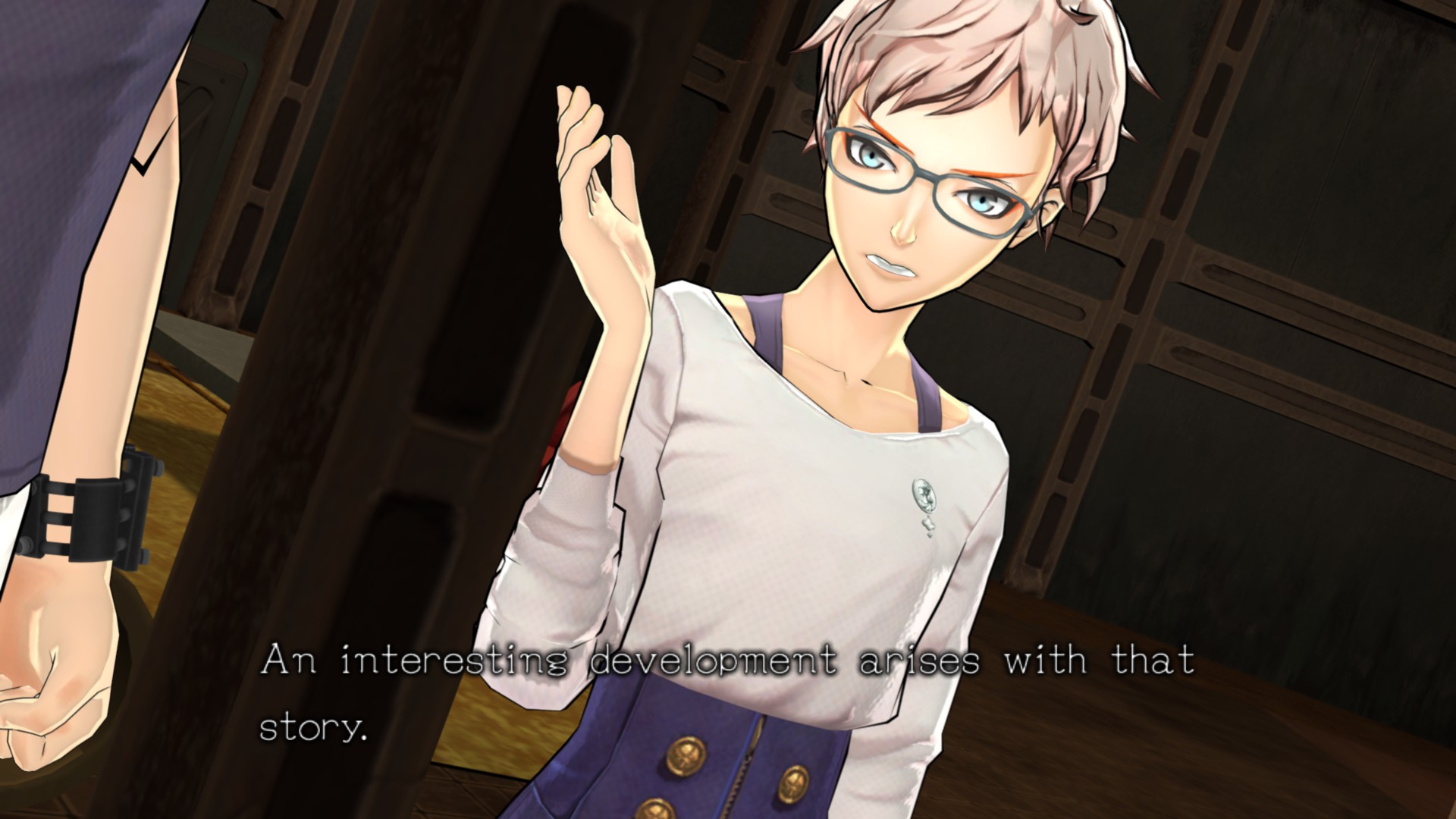 Even then, there is something a little… haphazard about how the story is constructed, as if there were large chunks of the game that were streamlined and cut out.  Heck, there’s no final escape room ala the Study from 999 or the Q room from VLR, so I feel certain in saying that the developers faced some restrictions.  I mean, after a very absurpt ending that failed to provide the same sense of solace that the prior games did, I found character epilogues added to my in-game files, explaining what happened to the majority of the cast, as they presumably lacked the resources to have an epilogue for these characters.

All of this is such a shame because I really, really, really do like this story, I love it so deeply, and in the first 15 hours of this 20 hour game, I was submitted to some of the most intense, emotional, and enthralling scenes in the entire series.  Every story fragment you visit has something interest about it, a nice character defining moment, a cool reveal or a twist along with it, and some of them are simply an utter blast to go through.  Either due to their bombastic nature, a cold twist that enhances the story, or a genuinely sweet moment that occurs between them.  The writing can be insightful, funny, and intense, sometimes even all at once, and the characters all have their opportunity to shine, and work well off of each other, even with their limited interactions with the rest of the cast. 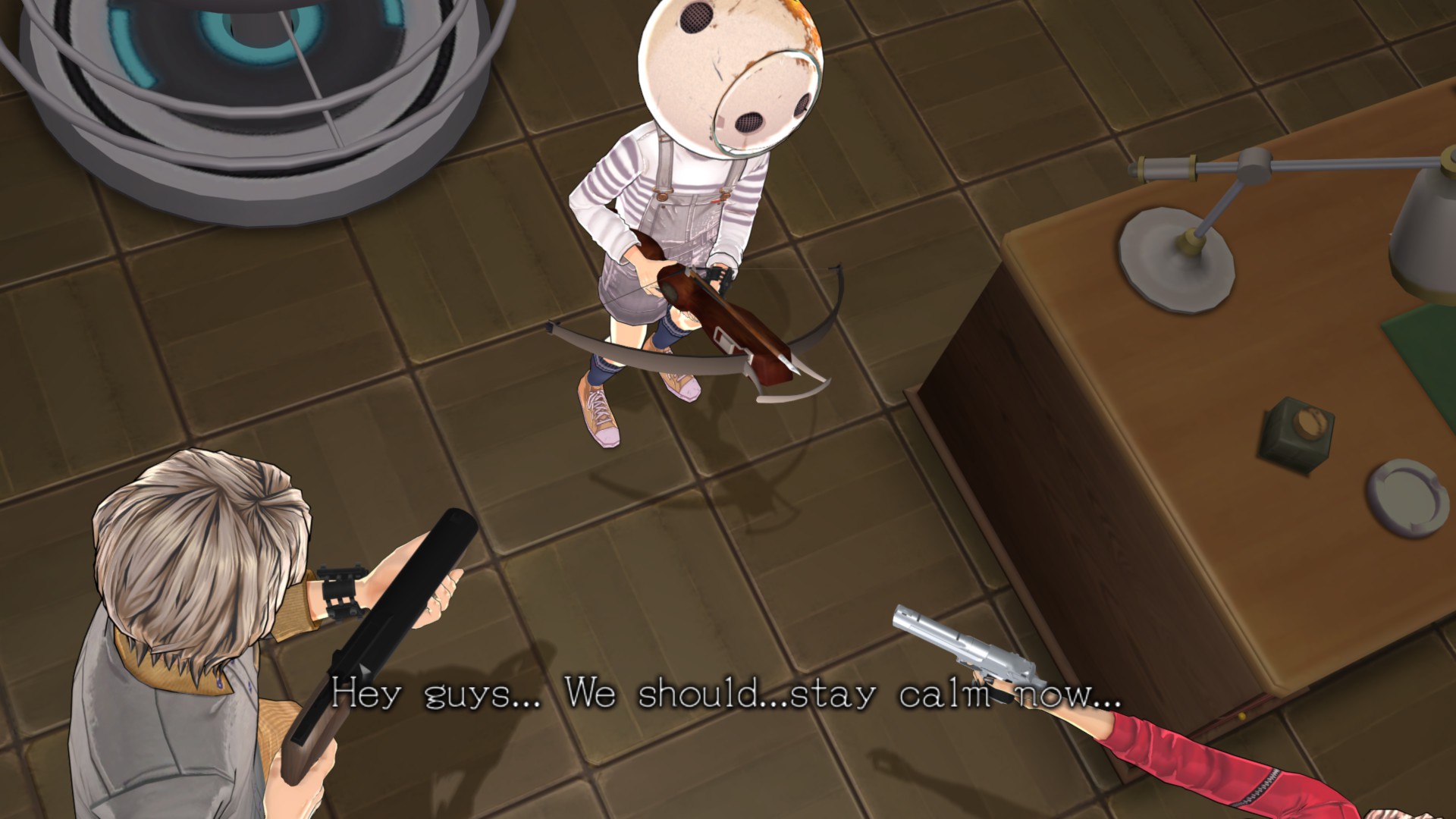 The final jump through the game, despite being a little confusing in regards where you’re suppose to go at times, was a culmination of three games and seven years that left me on the edge of my seat, ecstatic as everything began to fall into place and the spacetime continuum was being ravaged by the main characters.

When Zero Time Dilemma is good, it is everything a final chapter and good story should be.  If there had been an extra hour to touch on some minor details in the story that I’m still fuzzy about and make everything circular, instead of ending on this obnoxious note of the adventure continuing, I would be foaming at the mouth in sheer unbridled happiness at what I had seen in my time with the game.  But unfortunately, that is not the reality we live in. 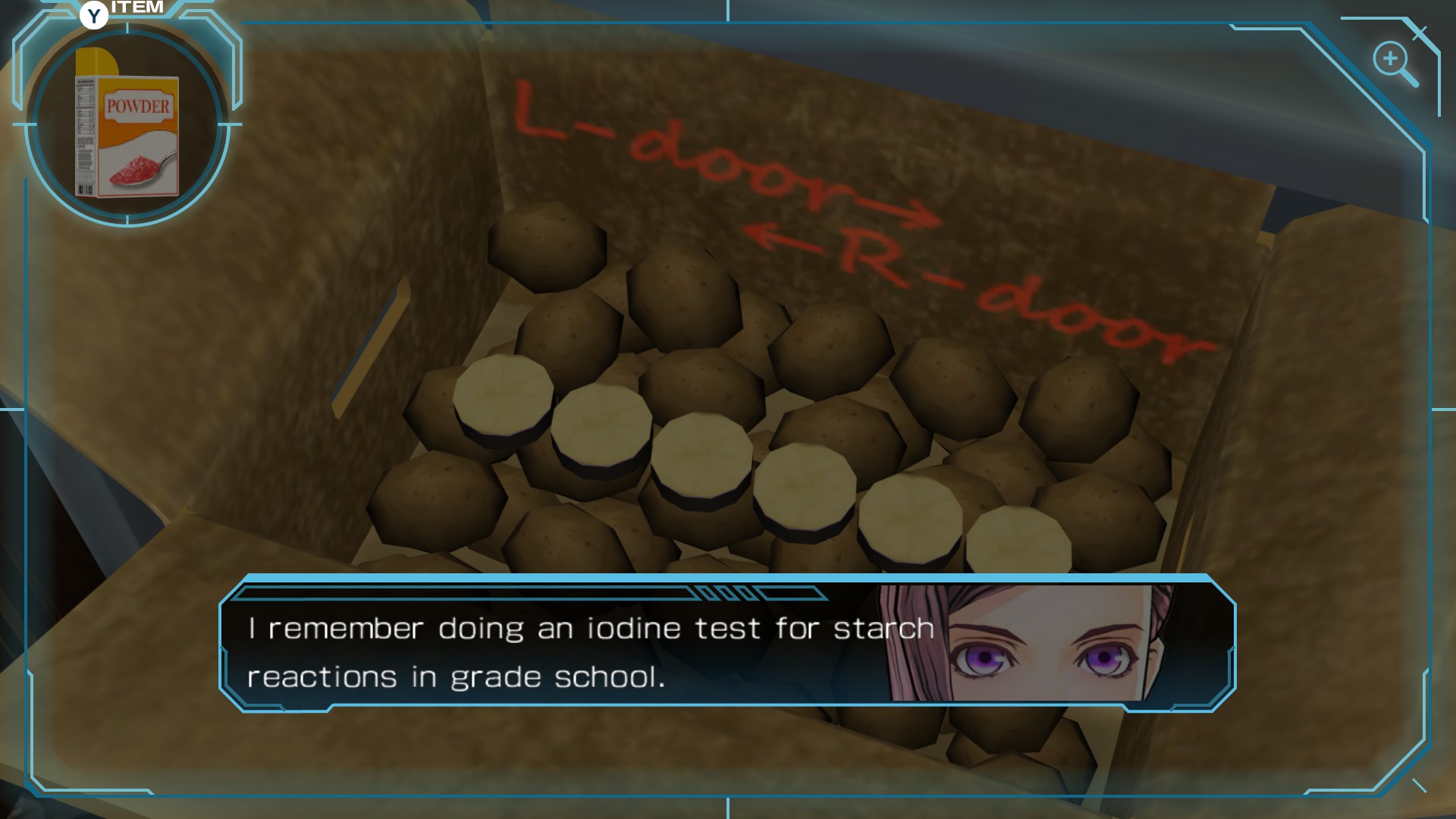 Instead, ZTD is simply a very, very good visual novel– although, that moniker might not necessarily fit the story.  Whereas 999 was clearly a visual novel, one with stupidly slow text, VLR was more of an audiobook thanks to its prevalent voice acting, and ever present text boxes.  In ZTD, there are no text boxes, and you no longer control the pace of the story, as everything is now told through fully voiced and fully 3D cinematics.  Cutscenes that undoubtedly fill up the majority of game time.  With the only gameplay between them being a series of decisions the player is prompted to make throughout the story, and the series’ trademark escape the room puzzles.

You remember how I mentioned that 999’s puzzles were a bit obvious and VLR’s were often too darn hard or cryptic for their own good?  Well, I’m happy to say that ZTD reaches a happy medium between the two extremes, by offering puzzles that are generally pretty easy to follow, have their own little subsystems to keep things interesting.  There is often more to abstract than just using things on things until you reach a solution at the end, with an object that must be interacted with and often a smaller puzzle that must be solved to progress, but never do they feel cumbersome or needlessly complex.  Well, except for the transporter puzzle, which I still don’t understand how I solved. 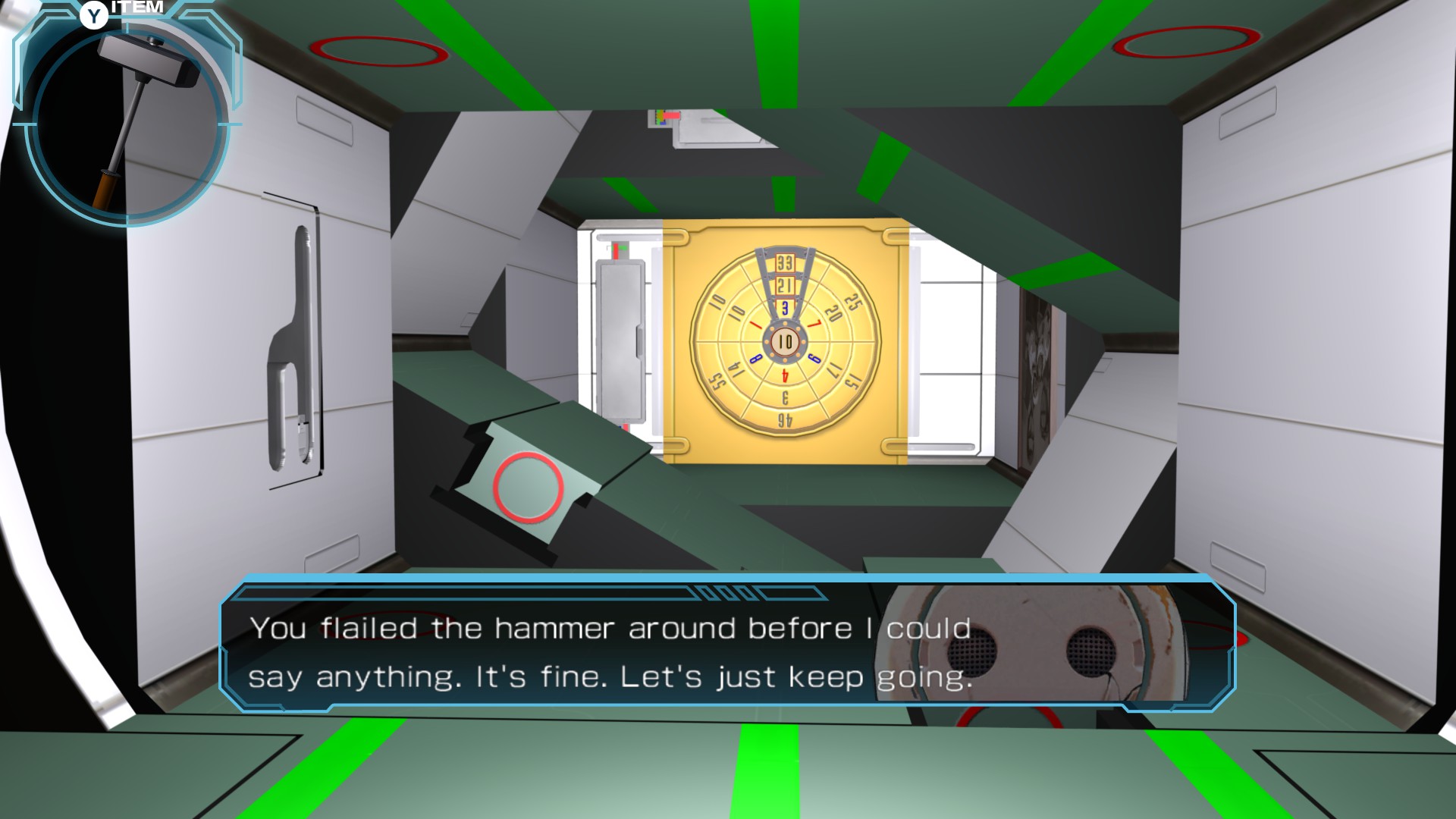 The balance between the two is met, and the puzzles on display were probably the most fun they have been in the entire series due to their modest level of complexity.  Yet, they feel like more of an afterthought here, as if the purpose of these puzzles, to get the main characters’ brain stimulated to access their latent abilities, is never properly addressed, and as I said before, there is no final puzzle room to test your accumulated skills and provide one final mental challenge, which always managed to legitimize the solving of puzzles.  I like the idea of having a final boss to assess the player before they receive the ending, and I genuinely feel as if I somehow missed one, despite getting everything there is to get in ZTD.

One thing that’s very striking about this game are its visuals, the highly detailed 3D models of their cast of characters that are arguably the best looking models to be running on a handheld.  Their detail is undeniable, and while I’m not normally for glossy looking characters, it’s subdued enough here to allow characters to look appealing, human, and like fully 3D anime characters.  Everybody well realized, their designs all unique from each other, and they all move well, when they do move that is.  Due to the expenses that come with moving 3D models based on scenes, characters are often left stagnant in the cinematics, with very limited movements.  It’s not a deal breaker, and easy to get used to, but it is a reminder of the budget the team had when making the project.  And possibly their limited experience with 3D games, but based on the credits, they brought in several additional people to work on graphics and such. 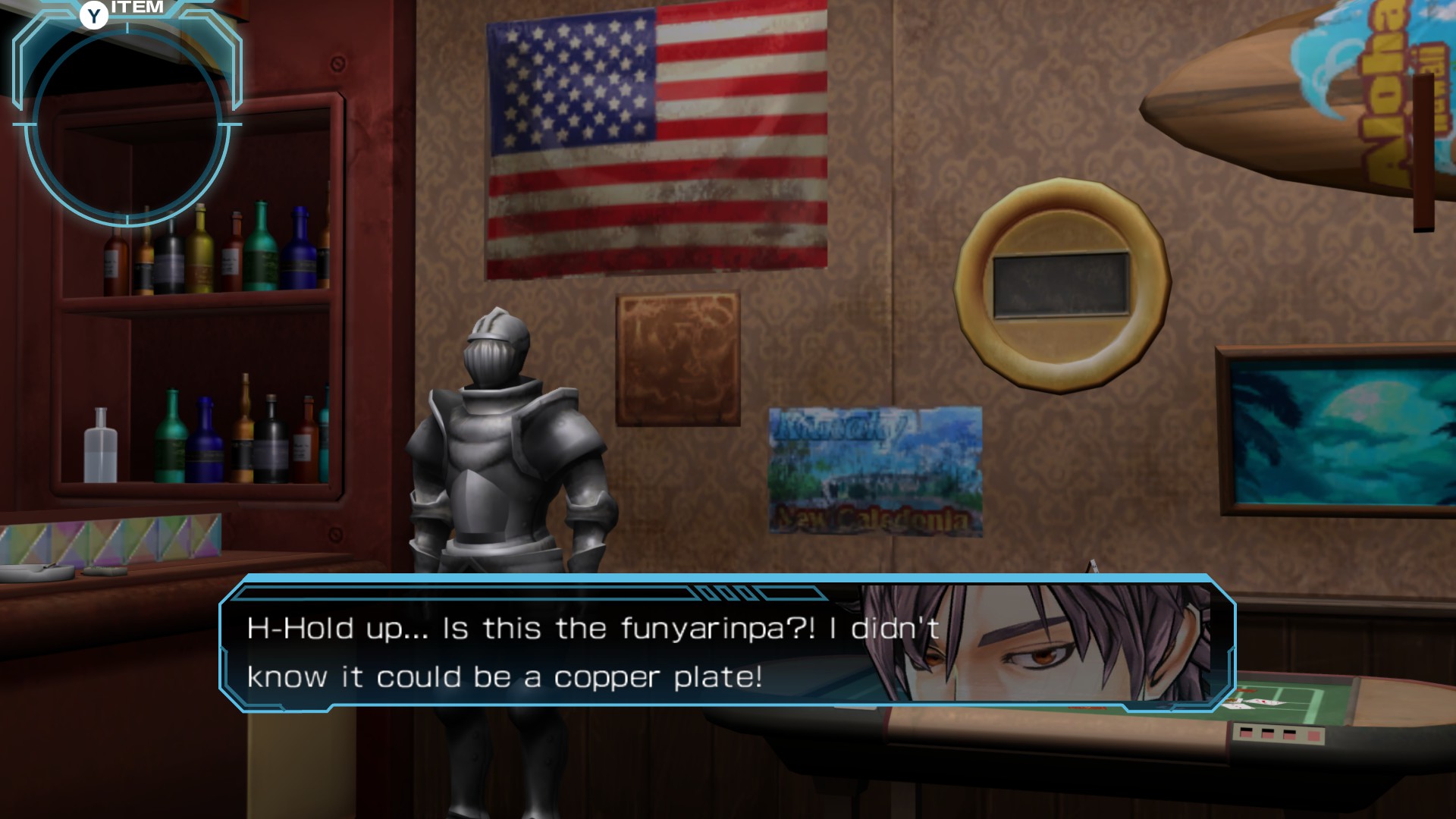 This resulted in the numerous backdrops of the game, which manage to be detailed settings, but often lack much texture work, and everything looks decently blurry as a result.  Still, the detail in each environment is very high for a game running on a modern handheld, and the game looks very good on PC, with several layers of anti-aliasing making every model look sharp while the 2D assets are high quality.  The only bad thing I have to say about the PC version is how you can’t right click to go back into a menu, and in order to zoom out from something in an escape room, you need to drag the mouse as if you were flicking something using a touch screen.  Beyond that, the port is fantastic.

It’s also worth noting that the music continues to be an atmospheric and world building collection of sounds that add tension and emotion to their respective scenes.  While there are dozens of lines that sound like they should have received an additional take, but didn’t for whatever reason, and there are also a handful of awkward lines mixed into the fold as well.  Which was surprising to me, as the localization team behind both prior Zero Escape titles did nothing short of a phenomenal job. 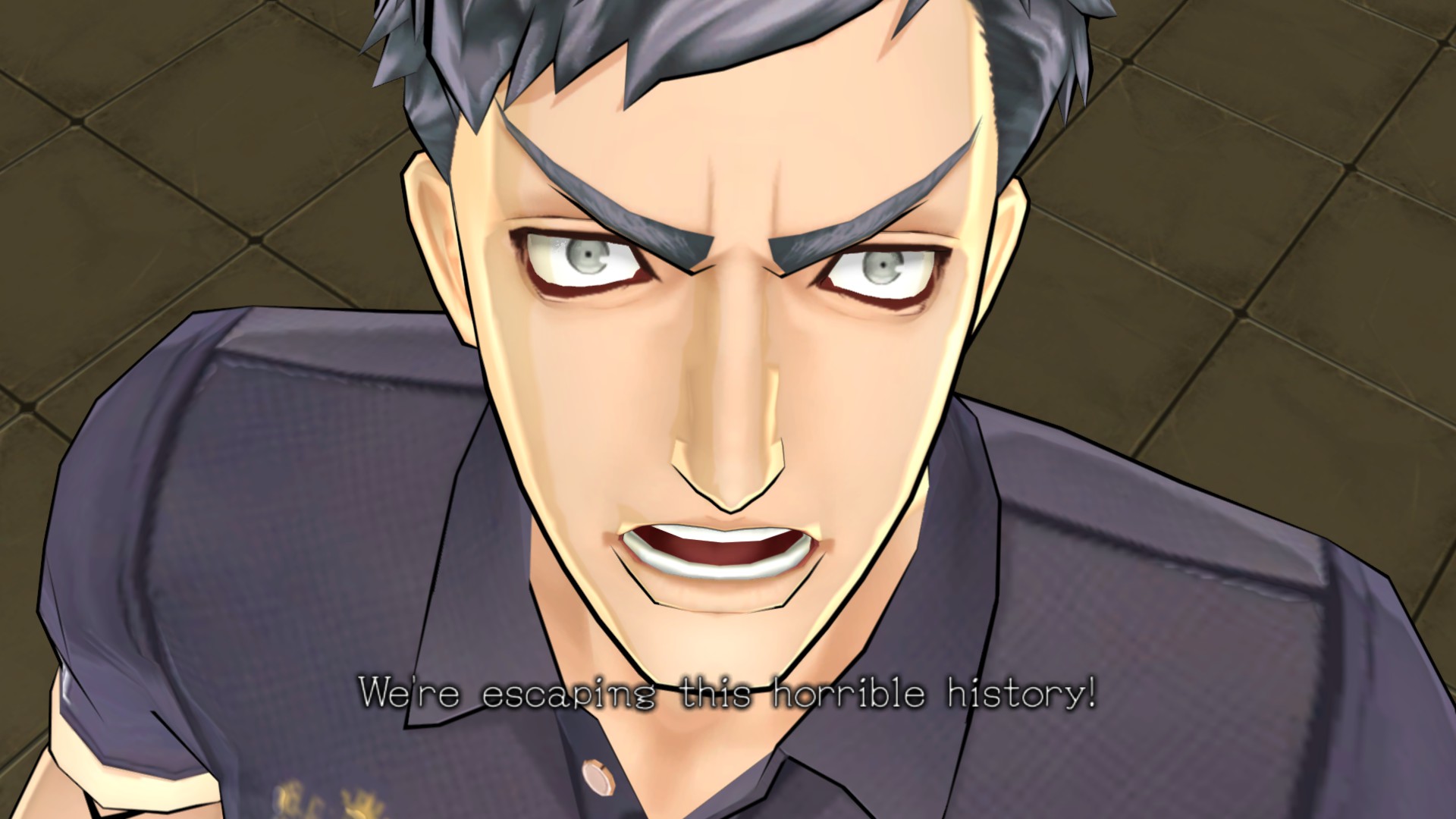 I wish I could be saying the same thing about Zero Time Dilemma, but I’d be lying if I said I wasn’t disappointed by it.  While the game has no shortage of good moments and interesting ideas that left me positively jittery upon seeing them, I feel like the experience as a whole was hindered by restrictions the developers faced, and had to compensate for accordingly by cutting away content or revising the story to minimize it.

Still, there is nothing quite like Zero Escape, and seeing the story to its send, to a satisfying conclusion has made for one of the most wonderful multi-game adventures that I have ever had the pleasure to experience in this medium.  I love this game, I love this series, and seeing it reach a satisfying conclusion is enough to temper me.  Good night sweet prince, may you forever reside within the confines of my heart. 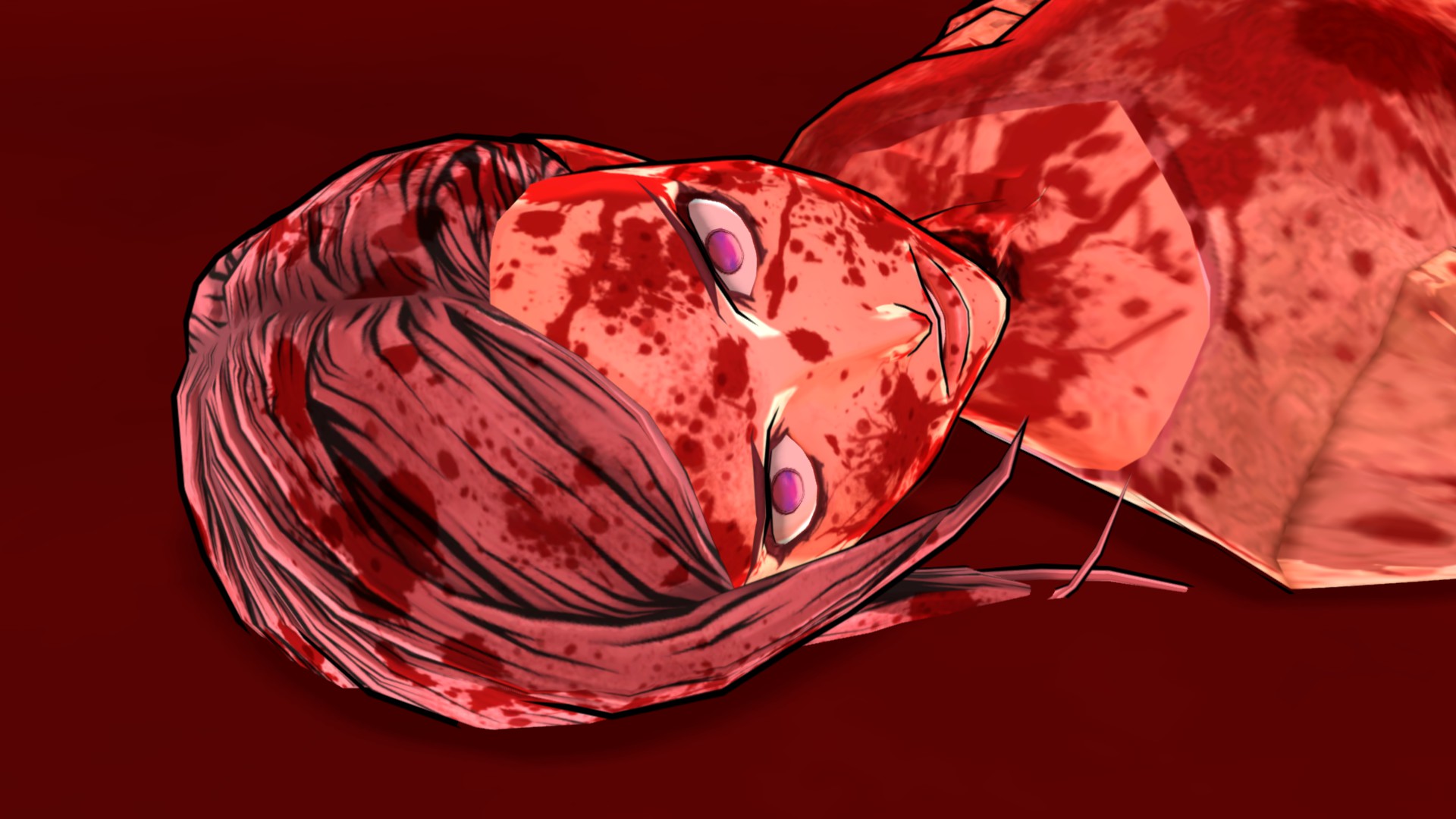