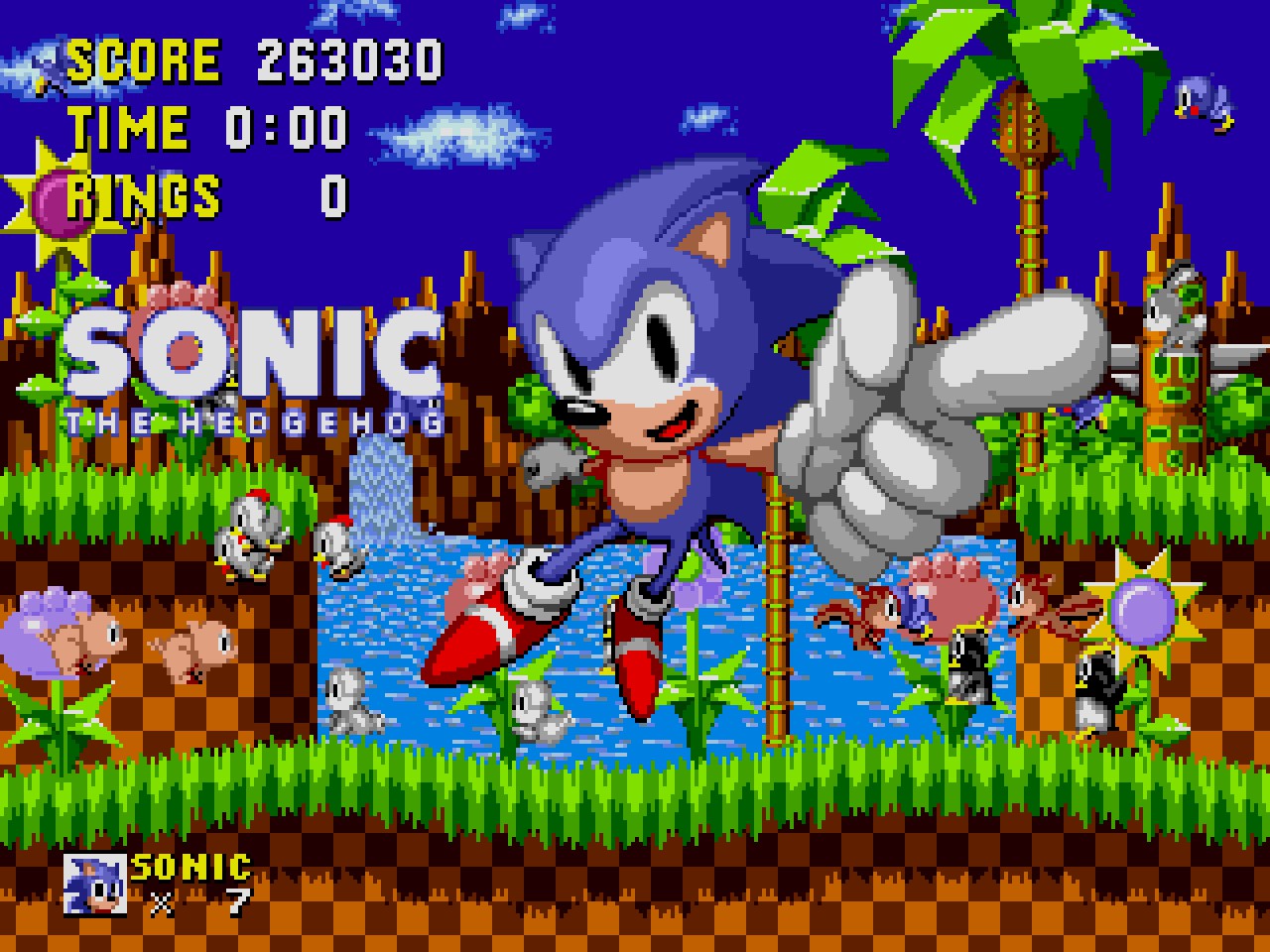 After the unveiling of Sonic Mania, it occurred to me how little I personally remembered the Genesis era of the Sonic The Hedgehog games.  I only ever played them at a young age, and I don’t think I played them very much at that.  Heck, the first Sonic game was the first video game I ever played, and all I remember about it was being in Marble Zone, losing all my rings, and getting upset after I died.  A memory that acted as a very poor first impression of video games.  Yeah, so I already have reason enough to not like this game, but being a poorly constructed relic doesn’t help much either.

The core problem that comes with assessing games of this era is that when you review them by modern standards, most of them aren’t very good, verging on pretty bad.  This is because games were designed differently back then and served a different purpose.  Back in the 1980s and 1990s the core demographic for games were children who possessed ample amounts of free time, and had little access to money, meaning that whatever expensive cartridge based games came into their possession had to last them for quite some time. 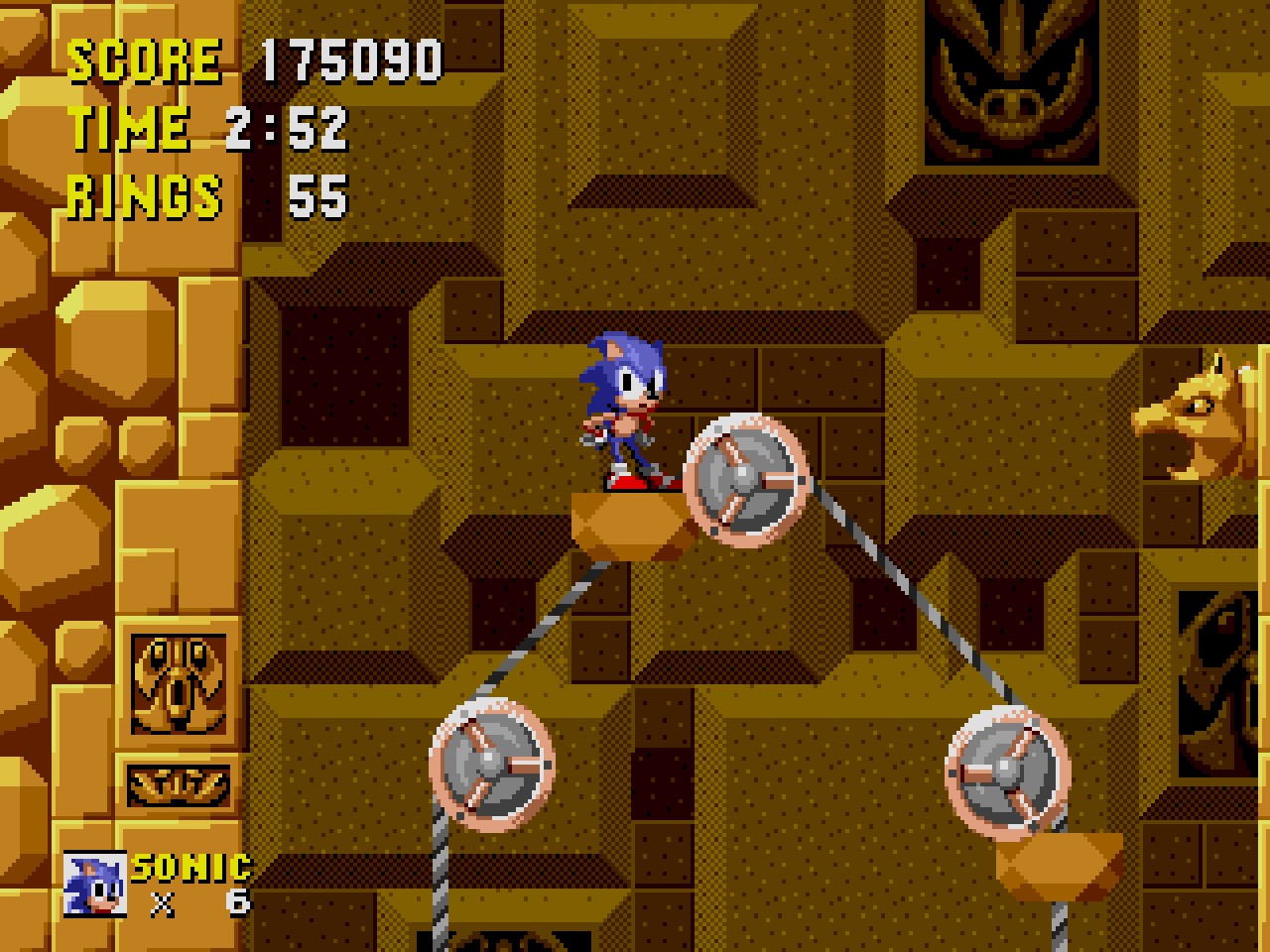 Due to technical restrictions, the amount of content that could be added to a game was very limited and the easiest way for game developers to increase a game’s temporal value was to make them really, really hard.  This was also seen in the arcade game industry, where games were made very difficult so it would take the player a lot of practice, and quarters, to see the end of a given game.

This is why you see life systems, point systems, and steep difficulty curves in these games.  Because games needed to consume the player’s time some way, and these were the easiest.  There’s also something to say about accumulated skill building, but I consider that to be a side effect for most games of these eras.  Namely due to segments that require either an unreasonable amount of skill or just brute force repetition and memorization.  It truly was a very different landscape than the industry today, where a lot of people don’t even bother to finish games they buy. 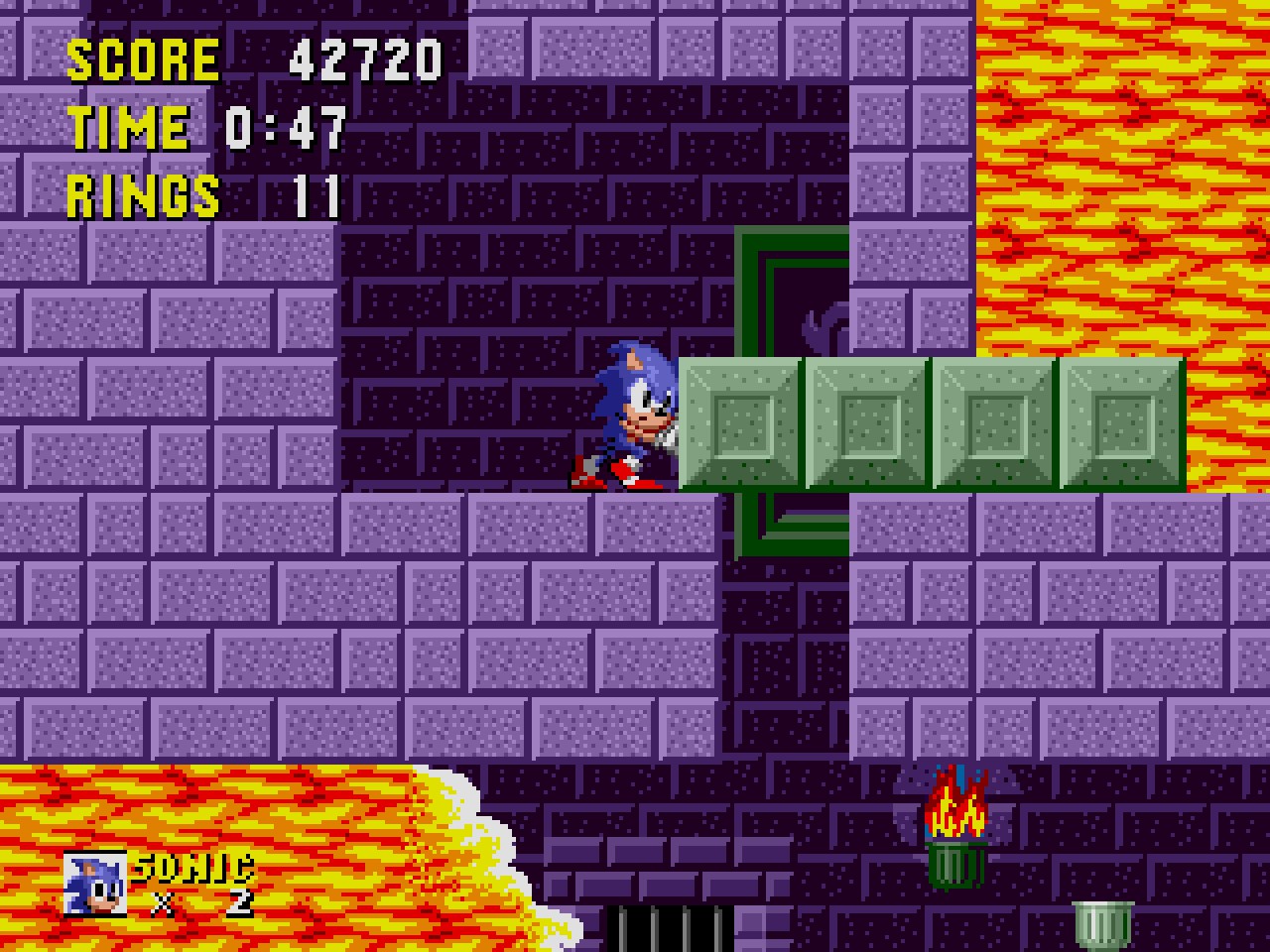 I just wanted to get that out of the way, because while there is a decent platformer in here, Sonic 1 is a very challenging game, and for very poor reasons, but first a brief overview for those who have been living with the insects and fauna beneath a pile of rocks.  Or just don’t know that much about retro games.  Sonic The Hedgehog is a classically styled 2D platformer with a series of large and expansive levels that follow a decently diverse range of themes and locales.  One centered around gathering rings, which are lost upon getting hit, as well as controlling and manipulating the titular character’s speed using momentum as understood by the game’s programmers, which is comparable to how something moves along ice, but with far less traction.

This alone is a rather vital thing to get wrong, and for the more traditional platforming sections, this lack of control can make things needlessly difficult, as the player needs to fight against the game’s physics.  Granted, I would describe a lot of Sonic 1 as fighting against the game itself.  A sentiment best seen throughout the level design as while some levels and sections allow for a fun breezy romp through an intuitive and well thought out environment that can be compelling to replay in spite of some wonky physics, the great majority of the levels feel as if they are designed around discouraging the player from running, going fast, or being anything but careful. 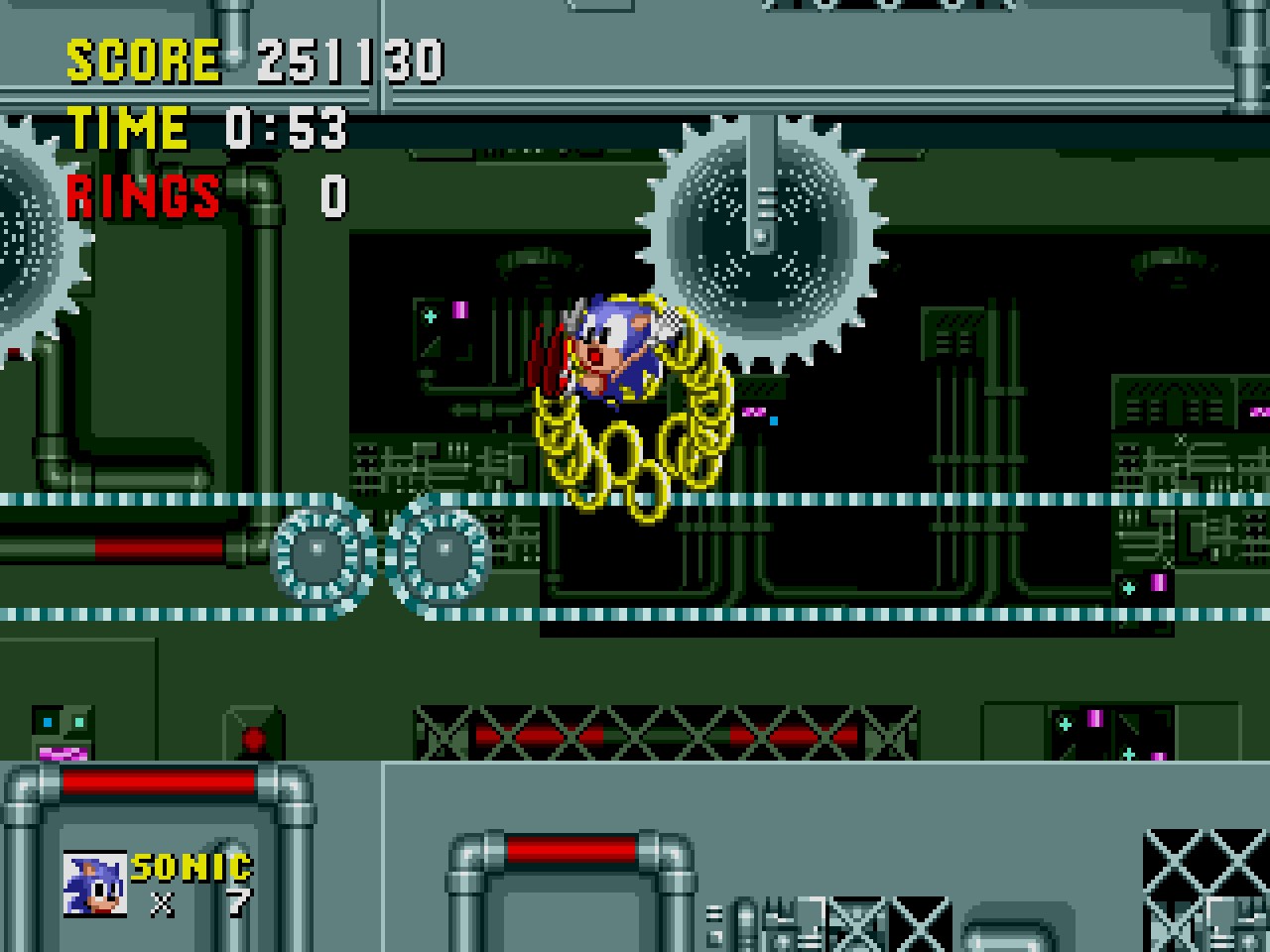 I couldn’t keep track of the number of times I ran into something, lost my rings as the game struggled to render that many sprites at once, or lost a life.  Whether it be an enemy, obstacle, spike trap, or a bottomless pit of death, I kept running into things as I tried to progress at the speed the game clearly wanted me to be moving at based on how its momentum worked.  Now, ideally I should be able to react to oncoming obstacles, but the high speeds, 4:3 aspect ratio, and large size of the sprites made seeing anything in front of Sonic as he ran at breakneck speeds very difficult.  Unless you know or guess that something is coming before it shows up on screen, getting hit is almost inevitable.

So this is a game where you only feel good while going fast, but are promptly punished for doing so more often than not.  It’s a very mean conclusion that I wish I did not come to, but after playing this game for three hours and abusing save states to get past certain sections, I was saying and thinking some far, far harsher things about this game, as I began to face the reality that I simply, just absolutely, hated the first video game I ever played. 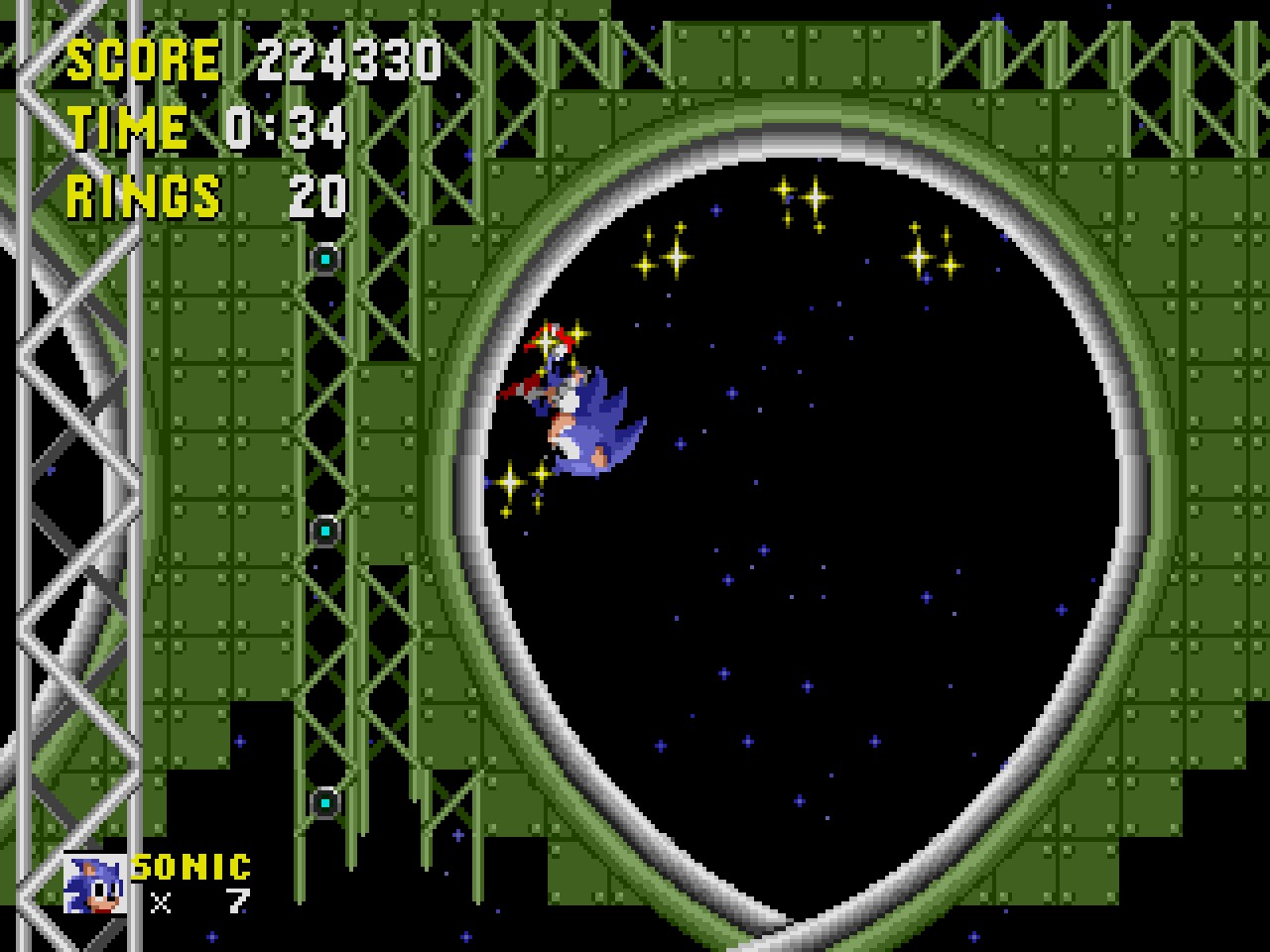 Despite certain visual elements of this game being inherently iconic, the general spritework on display here is rather lacking.  Sonic’s animations are rather limited all things considered, the enemies often blend in the background, and don’t look very impressive even when they are plainly visible.  While the environments incorporate a lot of tiles in their tilesets, as in everything looks like it is made of tiles, and have this very slapdash look to them.  Almost as if the development team wasn’t entirely sure what image they wanted to capture with the game.  The levels don’t even feel cohesive when placed side by side, from the bubbly Green Hill zone and psychedelic nonsense of the special stages, to reserved Marble Zoe and the sterile final few stages.  All while the soundtrack only boasts a few memorable tracks that struggle against the Genesis sound chip, which probably make this one of the weaker soundtracks in the mainline Sonic series by default.

I really wanted to enjoy this game, and genuinely tried to find the finer points in it.  I’m sure I could dig super deep and find some genuine compliments to make about this game beyond a few levels being decently fun, but my opinions are too clouded by the boundless frustration and all-encompassing upset that I now integrally relate to this game to do such a thing. Sonic The Hedgehog 1 is a genuinely poor platformer, and because of the nostalgic connection I have towards it,  I… I just find this game to be saddening. 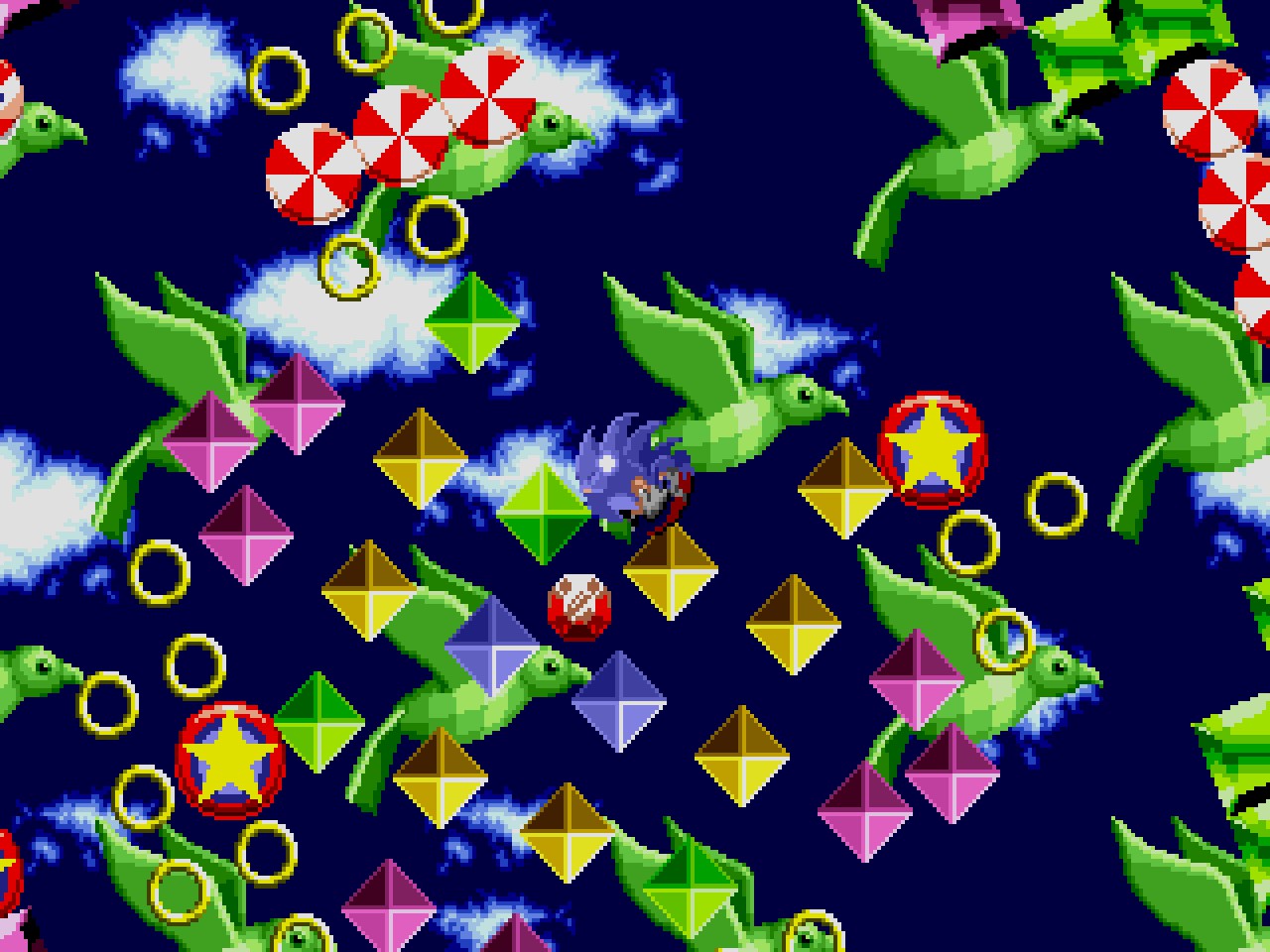