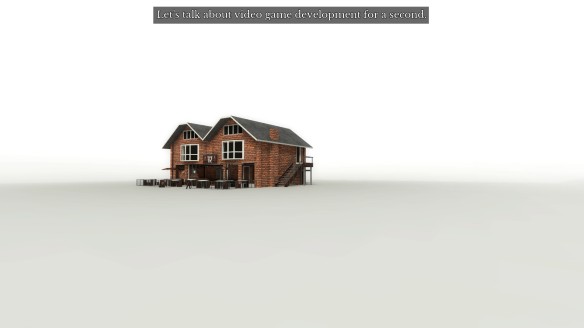 This game has been on my radar since it first appeared in late 2015, so naturally I proceeded to ignore it until it was conveniently placed in my hands, and long after the fuss and fervor about this game had passed.  Even though at the time of its release, I had already played and coincidentally adored The Stanley Parable, and was quite curious as to what one of the two people behind that game would do with their next project.  The results… were unexpected.

The Beginner’s Guide is a very odd game to explain.  It is a tale of friendship, human frailty, creative expression, and isolation.  One centered around the relationship between the aforementioned Davey Wreden and a friend of his by the name of Coda.  The game has Wreden take the player through a collection of games developed by his friend, narrating his thoughts and stories about the games and his friend, explaining what he believes Coda intended to do with all of these games, and showing a great deal of respect for his friends work.

The work itself carries a very distinctive voice, one that manages to convey a lot of emotion with very little, or express an innovative and interesting idea that is positively soaked in the unique personality of their creator.  There is actually quite a lot about it that reflects the inner workings of a creative mind, along with the anxiety and drive for quality that so often drives creative types to absurd length as they pursue perfection.  It’s something that I can relate to, and there is merit to going through this one man’s work on its own, before getting into the often overt symbolic meanings that Wreden attaches to these smaller games within a game.

Along with the greater symbolism, there is also a surprising quantity of awe inspiring scenes and set pieces in this game that manage to create a rather impressive image, or are just framed in such a way to further state the artistic capabilities of their creator.  There truly is a lot said about this Coda person to make them seem wildly interesting, and it’s easy to see why Wreden was so fascinated with this person that he made a game about his work, while telling the story about the two’s relationship.  It actually managed to see something practically unheard of and deeply connect with me on a personal level with the themes of betrayal, using other people as means, and other misdeed that lead to the melancholy conclusion to this brief tale.

However, no conclusion is more upsetting than the one that is revealed, the conclusion of how this game came together.  Quite simply, Wreden did not have permission from Coda to distribute his work to others, let alone sell and by extension profit from it.  While he does have reasons for distributing this, some of which are valid, at least on an emotional level, it gives the whole experience a very sour taste.  As if I am somehow defiling Coda’s work by going through this game.  For as much as I want to sympathize with Wreden, I cannot support his decision, and believe that he genuinely should not have created this game for public distribution, regardless of whatever artistic merit the title has, and trust me, it has quite a lot.

That’s what The Beginner’s Guide is to me, a story rife with artistic merit and generally interesting design ideas that are presented in a way that mirrors a creative process of personal understanding and evolution.  But one that I believe should not have ever been released to the public, let alone at a $10 price tag.