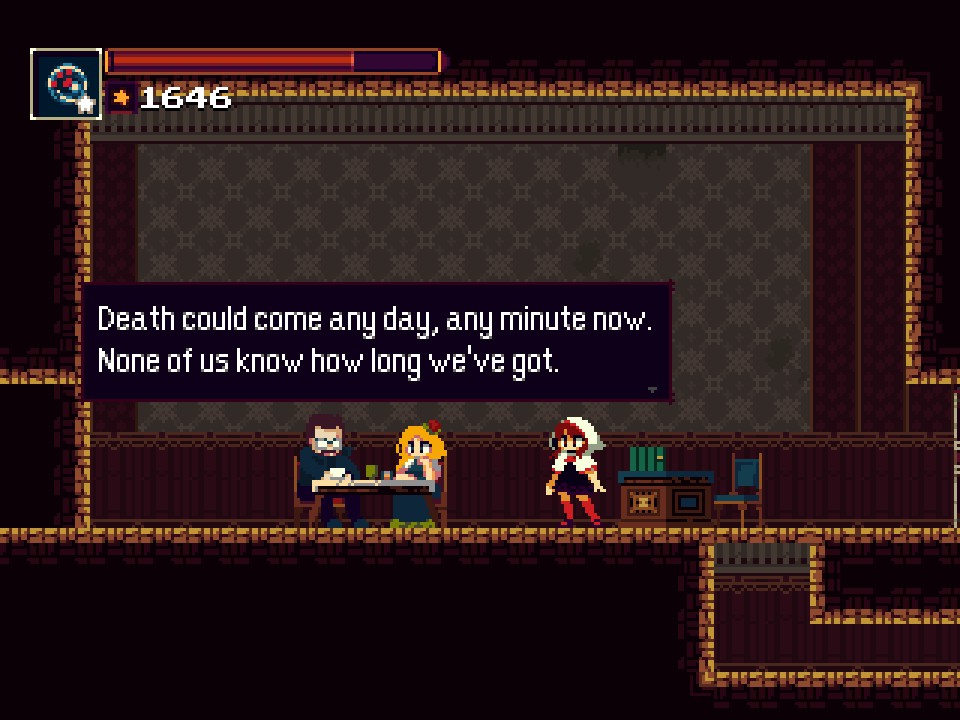 How to best begin… I guess with a history lesson.  Momodora is a series of action platformers that have been released since 2010.  They gradually grew from a series of freeware games into what is seen here with the fourth entry in the series, Reverie Under the Moonlight.  I personally have only played the third game, and I barely remember doing so, but it left enough of an impression on me to gravitate me towards the latest entry.  Which also happened to quite noticeably influenced by the Souls series, to the point where I saw people lovingly refer to the game as MomoSouls.

One of the most apparent of these influences is the lack of clarity presented with the story of Reverie.  The game centers around a priestess named Koha who is venturing to a distant land in order to seek help from a queen.  Except the land had fallen into decay due to some bad things that are never explicitly explained, and it’s up to Koha to save the day while uncovering bits of information about this land, mostly from the mostly inconsequential characters who occupy it.  Though I’m guessing there really isn’t a whole lot to look into, or even a slight explanation about many of the oddities Koha stumbles upon on her pilgrimage.

I could continue comparing the game to the Souls series, but it’s a more immediate comparison to relate Reverie to a metroidvania game due to the room based map, backtracking, search for upgrades, and interconnectivity of the world.  Though the world itself is not as interconnected as I would have expected it to be.  Instead, most areas seem to be heavily isolated from each other, with only one or two clear entranceways and very few shortcuts between areas, even if they are fairly close to each other via the map.  As such, it’s not surprising that travel is eventually relegated through a warp system made available near the halfway point of the game.

Travelling through the world is serviceable from there, but it lacks a certain punch to it.  It’s attributed to a lot of minor things, such as how in order to easily find secrets, it’s recommended to either have a map by your side while playing or equip an item that plays a chime whenever Koha enters a room with a secret in it.  Though, I’m really not sure why the locations are not just marked on the map as seen in Metroid and Dust: An Elysian Tail.  Even then, the secrets run the gamut of being easy to deduce and sensible, or requiring Koha to dash into a wall in order to find an unseen platform.  Which is just irritating.

Speaking of these secrets, items, and upgrades, they often lack the same gratifying nature seen in these sorts of games.  Health upgrades offer minute improvements individually, and while there are numerous new abilities or offensive maneuvers that Koha can discover, equip, and use, her maneuverability is only upgraded slightly as time goes on.  With the only notable additions being an air dash and the ability to turn into a cat, which is used surprisingly sparingly.

As for Koha’s basic means of attacking, neither her melee leaf or ranged arrows undergo much changed.  Her arrows can be poisoned, attacks may embedded with fire, and damage in general may be boosted, but these changes lack the same mechanical and visual impact as seen in the upgrades of many other games of the genre.  Think about the difference between weapons in the Igarashi produced Castlevania games, the beams in Metroid, or even the upgradable basic attack in a Shantae game.  Which I always consider to be a highlight of playing a metroidvania game.

As for how the basic attacks and combat fare, there is a certain weight to every action, Koha controls fluidly and responsively, and while things can be difficult, Koha has access to both a handy double jump and a dodge roll with a tangible amount of invincibility frames.  Enemies follow graspable rules, bosses have interesting patterns that tripped me up even as I was memorizing them, and things can generally be enthralling when going well.  It is a solid combat system so long as things are presented adequately to the player, which they are most of the time, barring a few off-screen attacks and rapid enemy maneuvers.

However, Koha’s basic leaf attack leaves something to be desired.  The attack automatically goes into a 3-hit combo whenever used on the ground, and while doing said combo Koha ends up moving herself forward slightly, often landing herself into an enemy’s hitbox and occasionally into another danger.  This makes the ground attack with the leaf, which would otherwise be Koha’s main form of attack, far less useful than it should be.  To the point where I stopped using the attack in most situations and began to rely on the aerial leaf strike, which probably deals higher damage per second now that I think about it, and the arrows, which I laced with poison for the majority of the game.

Moving on, I should probably talk about the difficulty of this game, as it follows a rather strange curve.  One where the game starts out rather difficult due to how poorly it eased me into the game, but once things finally clicked with me and I understood what I was doing, the game gradually became easier and easier as time went on.  At least before a three phase final boss that had me going through Koha’s hefty supply of bellflowers, an estus flask analog, at a rapid pace.  Though for those who crave a challenge, the game supports some insane difficulties and offers specific rewards for defeating every individual boss without getting hit once.  Rewards that cannot be found any other way.

On that note, it’s worth noting how the game handles its items.  Every item with a set number of charged fully restores itself once Koha stops at a save bell, which basically function the same as bonfires, so the player will never actually run out of everything.  However, she can only equip three active items at a given time and two items that give her a passive effect.  This naturally limits what can be equipped, and due to the wide array of items available, switching to them is commonplace.  Unfortunately, the process can be arduous due to a poor menu system that does not allow the player to sort items. Items are instead stacked in an inconvenient manner that turns what should be an easy process into something so irritating I felt it necessary to dedicating an entire paragraph to describing it.

Moving away from mechanical minutia, I need to compliment Reviere Under the Moon for its presentation, especially considering the amount of growth the art underwent between this installment and the third.  The animations are intricate and flow well, with a sense of movement and weight being carried throughout every frame.  The sprite art holds a style that, while clearly taking influences from the likes of the Souls series and Castlevania in particular, manages to be both distinctive and well realized. Enemy and character designs are appealing, while bosses manage to take things to another level with both interesting designs and some of the best animations in the entire game.

The only shortcoming here is the environmental backgrounds, which range between the well detailed and animated backdrop of the introductory forest area and comparatively dull settings that consist of a rocky flooring and backgrounds that are primarily a single flat color.  The game can still be a visual treat regardless of the backdrop, but the discrepancy here was large enough for me to actively notice it.

I’ll be the first to admit that I’m being fickle with a lot of my criticisms, but they were what I ultimately took away from what is still a good metroidvania style action game.  One with tight gameplay and appealing visuals, but lacking in many of the subtleties that make up whether or not I like a game.  I can certainly see why people would like or even love this game, but the world structure, backtracking, learning curve, and even basic attack all picked away at me to the point where I was actually eager to finally be done with the game.