Seeing as how I had a nice little buffer lined up for my reviews, I decided to finally tackle God Eater 2, after having cleared up God Eater Resurrection.  However, it turns out that GE2 came out in Japan before GER, meaning that GER had mechanics that are absent in what was released as its sequel.  Including an incredibly crucial one to the feel of its combat.  Yet for some reason Bandai Namco chose to release GER in the west before GE2.

During the weeks leading up to E3 2017, there was a lot of talk about Nintendo revealing a SNES Classic Edition to the NES Classic Edition they produced approximately 2.3 million of when the demand was closer to 5 million.  Well, now that E3 2017 is over, they chose to reveal the SNES Classic Edition.  As would be expected, it is a mini system that comes with two wired controllers and contains 21 pre-installed classic SNES games from Nintendo, Capcom, Konami, and Square Enix, including the unreleased Star Fox 2.  The Super NES Classic Edition will launch on September 29th, and will retail for $80.

While my interest in the NES Classic Edition was never that high, the SNES is a better system with a better library of games, many of which are arguably amongst the greatest of all time.  While you could just get a Raspberry Pi with loads of emulation software and Roms on it, there is something of a novelty to having a collection of SNES games, and there are two points about it that I want to bring up.

Firstly, the system will cost $80 and will only feature games from three third party publishers, all of whom Nintendo has a very close relationship with.  This could keep licensing costs down and would likely increase the profit margin of each unit sold.  As opposed to being a loss, as was supposedly the case with the NES Classic.

Secondly, Nintendo says these 21 classic titles come “pre-installed” on the system.  A curious word not used to describe the NES Classic  that might imply that more games could be installed on the thing.  Now wouldn’t that just be lovely idea that I may have suggested two months ago,  having the SNES Classic act as a mini Virtual Console box that can accompany the Switch during this holiday season.  Maybe they could even produce enough of these to meet the demand and keep them on store shelves while the Switch remains difficult to find… Yeah, I’m keeping my hopes low.

Moving on, Compile Heart, a developer partially behind the Neptunia series and various other RPGs have announced their latest title, which goes by the incredibly Japanese name of Death end re;Quest, which is actually sounds far more sensible than the punctuation implies.  The game is described as an “RPG where game and reality intersect”, centering around the protagonist, who lives in a depiction of the modern world, investigating a strange abandoned VR MMORPG and a young woman who is supposedly trapped inside its unfinished world.

While I could roll my eyes at the way VR MMOs are presented here, the premise is actually pretty interesting from a gameplay perspective, as the player will need to overcome bugs, discover exploits, install game systems, and encountering characters and environments that have been corrupted via glitches.  There is also some mention of NPCs with “human hearts” along with characters who “should not exist”.  I would be very hesitant towards this concept given the quality of many of Compile Heart’s games, and am, but the fact that the scenario is being handled by Makoto Kedouin of Corpse Party fame.  A very odd inclusion that I interpret as a sign of hope that at least the story here will offer some intrigue. 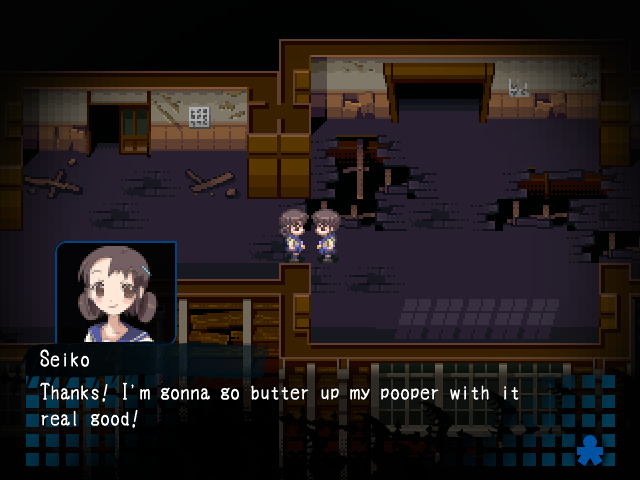 In a recent interview with Falcom president Toshihiro Kondo, the subject of the devotedly regarded Trails, or Kiseki, series came up with regards to localization.  While nothing was devotedly promised, Kondo mentioned that he and Falcom as a whole recognize the value of releasing their games internationally, especially when it comes to company revenues.

As such, the company is interested in bringing over two of the more recent games in the series, Zero no Kiseki and Ao no Kiseki, or Trails of Zero and Trails of Azure, to an international western market.  Along with the updated Evolution versions of the three Trails in the Sky titles.  While I am not a proper fan of this series, I am always one to champion localization, and hope that these two titles are more remarkable than the amazingly average Trails in the Sky.

The Little Witch Academia game that was revealed a few weeks ago has been officially announced for a western release by way of Bandai Namco as Little Witch Academia: Chamber of Time.  The only major details about the game were that it will feature the original cast, which is obvious, will be an action RPG, unsurprisingly, and features some absolutely gorgeous visuals that wonderfully capture the look of the series.  The game is set to release sometime in 2018 in North America for PS4 and PC.

That would be all for this week, but Aksys Games held an event at Anime Expo, which is behind held this weekend, and announced several localization projects.  Creeping Terror is a 2.5D horror thriller that centers around a highschool girl exploring a variety of isolated locations and predictably being hunted by supernatural horrors she must flee from.  I could not infer much else from the off-screen gameplay footage, but this title may be worth investigating further when it releases for the unusual combination of 3DS and PC this fall.

This was followed up with Drive Girls, a game from Senran Kagura creators Tamsoft, and as should come as no surprise, the game is centered around a group of busty young women who fight off large quantities of foes in the form of a fast paced beat ‘em up, except these girls can turn into cars.  It’s an odd and silly game that actually released in Europe a few months ago, but will be available in North America on August 11th.

Though that was not the only game from Tamsoft, as the gratuitous SG/ZH School Girl/Zombie Hunter is also coming to North America for PS4 later this year.  Localization news about this game originally popped up after a German retailer accidentally listed the game back in January, so the only surprising thing about this game’s localization is the grammatically bizarre title and fact that it is coming over by way of Aksys.  Seeing as how the game is basically a spin-off of Onechanbara, except it centers around Japanese school girls with machine guns who fight off zombies and distract them by tossing their clothes off.  Also, the game is stupidly bloody.

Beyond these, Aksys also showed off or announced a collection of otome visual novels the publisher is bringing over.  All of which strangely come from the Idea Factory subsidiary Otomate, despite the fact that Idea Factory has a western branch, feature downright bizarre Japanese titles that I cannot help but love, and feature far more interesting premises than I would assume any otome to have.  Anyways, the games mentioned were Bad Apple Wars, Code: Realize ~Bouquet of Rainbows~, 7’scarlet, along with Psychedelica of the Black Butterfly and Psychedelica of the Ashen Hawk.

That’s all for this week.  Come back on Wednesday for a review of one of the worst games I have ever reviewed for this site.