After three years of eager anticipation, it has finally happened.  Press-Switch has finally been updated!  For those unaware, or have forgotten, Press-Switch is an absurdly expansive freeware visual novel centered around body swapping, mind alteration, possession, cloning, merging and all kinds of fun stuff.  While it may seem like some sort of fetish driven excursion, which it is at least to some extent, the level of detail, variety, and complexity in its story has turned it into something far greater that I could have ever expected, and I cannot say enough good things about the game.

Now, considering how much I have talked about this game, and how much I clearly enjoy it, one would expect that I’d review the latest build, right?  Well, I kind of can’t.  This is because the build only contains the new content that the developer was working on for this update, and the relevant content preceding it.  They currently plan on revising much of the older content of this game and effectively relaunch the title with a new version.  That version, presumably titled 4b, will be the version I will review.

Anyways, this section is primarily for gaming news, so I should probably talk about the happenings of this past week, or at least the ones that captured my attention.  The first on the list is the general fervor that has been developing around the prevalence of loot boxes in fully priced AAA games.  A tendency that carries with it a plethora of alarming connotations.  As this act is an example of exceptional greed from bloated corporations, a means of manipulating people with a personality or mind that is vulnerable to the allure of gambling, and a way in which the business of games is actively hurting them by having them be balanced and influenced to work in favor of players who offer additional money.

This sort of behavior, compounded with the prevalence of collector’s editions, season passes, and general consumer unfriendliness that has become so omnipresent that many have just come to accept, is one of the main reasons why I rarely ever cover AAA game releases on this site, as the business behind these products has ultimately sapped me of all my interest in all but nary a few.  It is also a factor that negatively affects the game’s design and will be forever tied to the game unless the developers willingly patch these features out and rebalance the game.

Moving aside from that ramble, as part of a recent trailer for Atlus’ upcoming Shin Megami Tensei Strange Journey Redux, the company showed footage of a sidescrolling metroidvania title featuring company mascot Jack Frost and Jack-o-Lantern.  It looks great from the snippets of gameplay shown, featuring interesting looking combat and a few unique or novel ideas, while also being quite appealing visually.  However, the phrase “This is a lie” pops up near the end of the trailer.  Implying that this is a joke, which I find to be an absurd notion, as the game clearly had a lot of work put into it, and would be a nice title to add to diversify the company’s line-up.  I can only hope that it does become a real title, as this sort of thing is right up my alley.

Publisher of various niche Japanese games, NIS America, recently made a public statement about one of their more recent titles, Ys VIII, apologizing for the quality of the localization featured in the original release, and claiming that a fix is due out in late November.  An announcement that came as a surprise to me, as I have not really been following that game’s reception, but it is both unfortunate that the game wound up this way and fortunate that the publisher’s mistakes are being corrected.  Also, this makes me doubt that NIS America will be handling projects for Falcom again, meaning they’ll continue being handled by XSEED, I suppose.

Closing out the week, a rather peculiar story popped up, that games media giant IGN has purchased Humble, the company behind the Humble Bundles, Humble Store, and a game publisher for titles such as the recently released A Hat In Time.  An unexpected and ultimately weird proposition that results in a game media outlet now owning both a publisher and a games storefront, which bring sup all kinds of worries and fears about collusion and misrepresentation.  IGN have stated that they do not intend on changing Humble, as they have been successful in their efforts, but the prospect of IGN reviewing or promoting any of the titles published by Humble suddenly got a lot murkier.  Disclosure and avoiding bias is very important in just about any industry, and I just hope this does not ruin a company that I quite like, if only because they are a good source of inexpensive games and sometimes DRM free downloads.

Also, as one should expect considering how I made one for the prior version, I prepared a flowchart for the latest version of Press-Switch.  Enjoy! 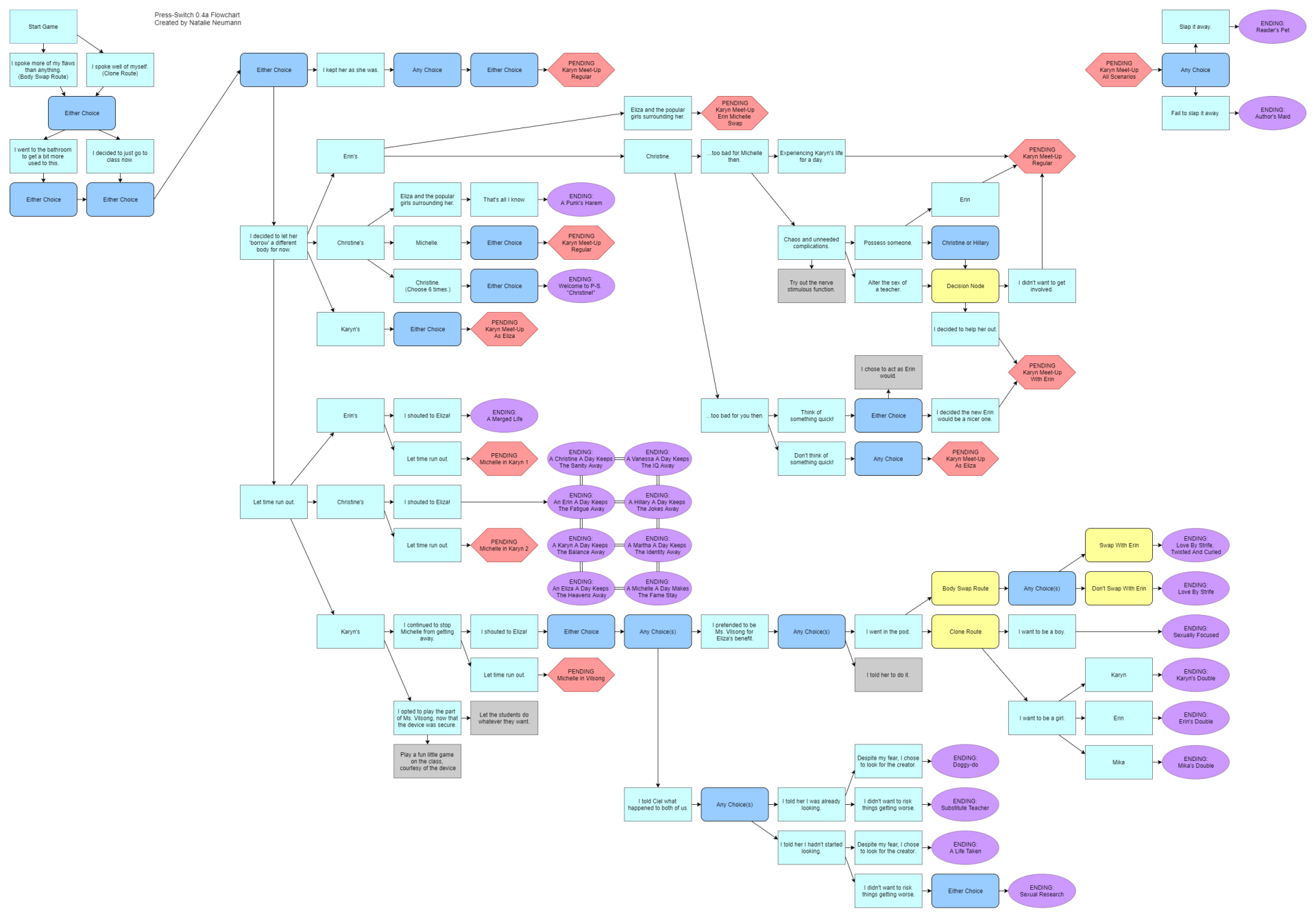