At the mountain of madness.

While I do enjoy reviewing more obscure and odd games, there come titles where I am simply left holding my hands up, unable to do much beyond exclaim my confusion.  One of those sparsely seen titles is Army of Tentacles: (Not) A Cthulhu Dating Sim.  An RPG created in the visual novel engine Ren’py that is heavily based on the work of H.P. Lovecraft.  Or more specifically the short story Shadow Over Innsmouth and the greater Cthulhu mythos, with a self-aware and humorous personality that is all its own.

More precisely, the game is centered around Perry Hollycraft, the child of a human and a deep one that is predestined to destroy humanity by forming an army of various Lovecraftian horrors.  Except these ones are pretty chill and there are other fantasy creatures like werewolves and witches.  It is a conceptually straightforward story that is peppered with comedy to make it feel like something all its own.  However, the title’s methods of storytelling and information distribution that honestly left me very much confused about the inner workings of its story, mythos, and general goal.

Yes, this is yet another title where I was scratching my head up until the very end, feeling like I skipped past a very vital introductory scene that laid out all the details about this world, these characters, and Perry’s ultimate goal.  Instead, everything is so muffled that I was never completely sure what I was supposed to be doing, if I was going about things the wrong way, or even how this game works on a detailed level.  This sense of confusion perpetuated throughout the inner workings of the world, involving the political climate between the deep ones, led by the elder god Dagon, and the town of Innsmouth, led by mayor Marsh.  Which branches off into a society that resides in the nearby woods, a subterranean genetic engineering facility, and a modern looking university, despite the fact that the game takes place in 1927.

It is all genuinely interesting stuff that I truly did try to absorb throughout the story, but still found myself desperate for a form of glossary or codex to better explain things to me, as the game’s prologue certainly did not.  That being said, what I did understand, I enjoyed very much.  The game’s unique sensibilities, tone, and reinterpretation of its subject matter do amount to a genuinely interesting tale with characters who, often due to the outlandish nature of their personalities, managed to be appealing despite this game’s fairly brief run time, as I was able to get through the story in about 4 hours.

Although, it is worth noting that I was not able to see everything the game offered during those hours.  I mentioned earlier that this game is an RPG, and that unsurprisingly means that the game has a sizable quantity of side quests, optional characters, and unique content to uncover.  The problem is that this game is so obscure that I could not find any documentation clearly stating how to uncover these secret quests and characters.  I was able to get some optional content, but for everything else, I could not figure out how to trigger it, or the game told me that Perry did not have the necessary prerequisites.  What were those prerequisites?  No idea!

I considered going through the game a second time in order to uncover that which I have missed, but the game apparently did not think its own optional content was that important.  Upon completing the game, the player is awarded with both an epilogue and a grade based on their performance in the battle for Innsmouth that marks the game’s conclusion.  I somehow, while missing loads of content, managed to get an A for my efforts.  It was around there that I was too thoroughly confused with the game’s structure to believe that I ever had any chance of fully understanding it, and rested on my single playthrough.

Moving onto the gameplay, Army of Tentacles is an RPG where the protagonist is given about 15 months of in-game time to prepare for the aforementioned invasion of Innsmouth, and is tasked to recruit an army of tentacled beasts, among other assorted allies, and train them for the anticipated conflict.  This is done by travelling across various locations throughout Innsmouth, a distant island for the deep ones, and the nearby woods, which are filled with a variety of odd creatures.  In these locations, Perry can accept and complete quests, and gather new equipment for combat.

Combat consists of verbal disputes wherein Perry must choose the best of four provided options to lay a beatdown upon all who dare to challenge them.  It is an interesting and novel concept, but the dialog flow follows its own logic, one formed by the mind of someone who I can only assume to be a literature and RPG nerd who grew up in the early years of the internet.  Sometimes the right response is easy to guess, other times it can be a bit confusing and roundabout, like when it divulges into a tangent about how the meaning of Moby Dick cannot be adapted into other mediums.  This can be particularly problematic because Perry can only take about 3-4 hits before it’s game over.

This in turn encourages players to save every minute or so if possible.  Especially because Army of Tentacles is more than willing to revoke the ability to save from players, which I have never really seen in a Ren’py game before, and naturally do not care for.  This leads to more skipped text, reloading, and reattempts to get through combat without taking damage.  Why is that so important?  Because the only way to recover health, or Sanity as the game calls it, is by resting and eating up time on the ticking clock, which also diminishes as Perry checks locations.  And seeing as how the army needs to be trained, which takes time, the player should leave as many days as possible to grind their units and party members up before the finale.

It is a gameplay system that I honestly cannot say I am very fond of.  It encourages obsessive behaviors and honestly reminds me of games I would only feel comfortable playing with a guide or walkthrough, except no such thing exists for Army of Tentacles.  However, this does add to the odd nature and personality that exemplify this game.

Though, there are two more oddities I should address, the DLC and the presentation.  Despite being a $5 visual novel, Army of Tentacles has $10 worth of DLC, which expands upon the content existent in the base game and offers unique scenarios, but the approach honestly baffles me, especially because of how different the presentation is in each of the DLCs.

In case it is not already obvious from the images featured throughout this review, Army of Tentacles is kind of a bastard child when it comes to its presentation.  Backgrounds are represented using photos, human characters have sprites that look like they were taken from some sort of public domain repository, while just about every other character is represented with an appealing painterly sprite that capture a fairly wide spectrum of designs.  Oh, and there are no alternate poses or expressions for any characters.

The end result is a cobbled together effort that becomes even more varied in the DLC campaigns, and generally only serves to combine with the story and gameplay to create what is one of the most genuinely bizarre titles I have ever played.  However, amidst all of this, the most baffling aspect about this game is the inclusion of full voice acting for all characters in the main story, excluding Perry.  The voice acting itself is a notch better than what I expected, spans over 30 different voice actors, and while I would not call it good voice acting overall, there is a lot of effort exuded by some of the actors.  Plus, the whole thing is so needlessly ambitious for a project like this that I cannot help but be impressed by it. 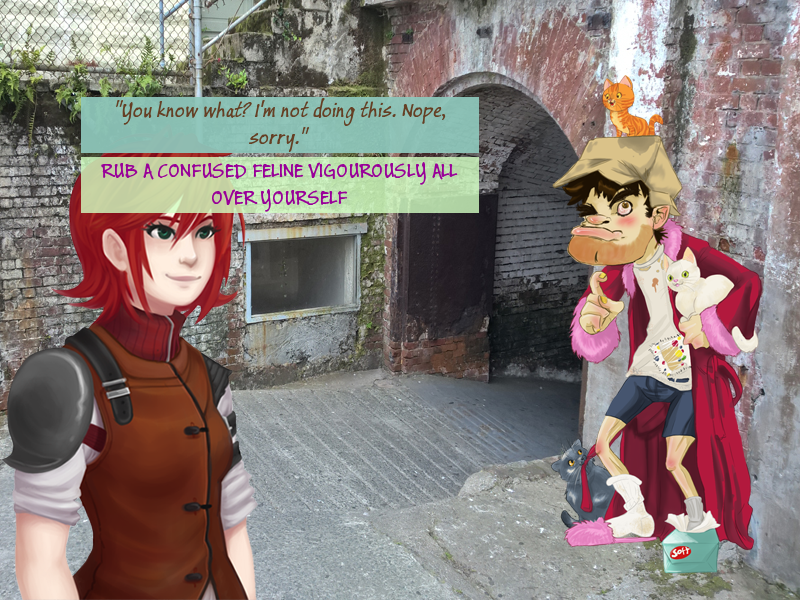 While I am not very familiar with a lot of H.P. Lovecraft’s work (even though I should be) I understand that a lot of it centers around the idea of one succumbing to madness as they uncover things that their mind cannot process or accept.  Whether or not emulating that was a goal of Army of Tentacles, it certainly succeeds in creating that feeling, as its oddball sensibilities, confusingly gated content, and hodgepodge presentation all lead to an experience simultaneously endearing, baffling, and intriguing.  One that I would not necessarily call good, but has certainly captured more of my attention than a lot of other games I played this year.