Student Transfer is an obscure community developed visual novel centering around transformations, body swapping, mind control, possession, and more that was itself inspired by a similar visual novel by the name of Press-Switch.  Since its original release back in 2015, this title has continued to grow from a small and admirable effort into something far greater.  Seeing as how I reviewed the prior two builds of the game, I figured it was only customary for me to review this latest release, and also create new flow charts for it.  For those interested, the game is available for free and can be downloaded here.

Disclosure: My significant other is a former member of the Student Transfer development team, and I am friends with a former lead member.

Student Transfer is a large scale choose your own adventure style visual novel that follows John Davis, a fairly unremarkable highschool student whose ordinary life becomes extraordinary on one fateful night when he either receives an incredibly powerful alien remote as a consolation gift after being probed by some aliens, or an ancient spell book written by his ancestors.  From that initial decision, the game opens up into a sprawling web of storylines, routes, and choices that wildly alter the story, along with a fairly massive cast of characters to interact with.  Thereby setting the stage for enough stories about body swapping, mind control, sex reversal transformations, and oh so much more to fill several full length novels. The sheer quantity available here is largely due to this game’s nature as a collaborative project, which does bring with it some inherent positives and negatives.  The core negatives are a fairly high turnaround, with a lot of the writing staff having become inactive over time, and how the writing style is not uniform throughout the game, and can easily shift along a route as one writer picks up the storyline from another.  However, the latter is undermined by how the editors do a good job at keeping things consistent, and the writing quality on display here is relatively high.

As for the positives, the main one is the sheer breadth and diversity of the content available.  It is clear that every writer is genre savvy enough to know how to compose compelling stories that deal with this subject matter, and what they have come up with since this project’s inception is rather impressive.  They managed to create a series of unique and memorable storylines that are interesting and impressive in their own right, but the part that really makes them special is how they all manage to exist within the same universe while encompassing so many concepts and tones. From the route that has John and his nerdy friend Kiyoshi hunting for ghosts in the girls’ locker room, which ends with them confronting a body stealing rapist and murderer.  The one where John possesses a girl with some serious unspecified mental issues and finds himself struggling to maintain his identity as he finds himself behaving like the person he appears to be.  The incredibly lengthy route detailing John’s relationship with his his math teacher that features a surprisingly adult perspective on relationships.  To the many, many partially complete paths that involve John goofing around with his newfound powers, both by himself and with his friends, getting into all kinds of scrambles.

It is a level of variety that feels appropriate with the subject matter and premise, never being unnecessarily dark or overly lighthearted, and always coming off as creative and passionate.  Because of this, I always found myself eager to see what the next route would hold, what kind of story it would bring, how the remote or magic will be used, and what characters would get caught up in these shenanigans, which brings up another highlight of the game for me. While I still think that the character count is a bit too numerous, and some of the naming conventions present with them are odd, across all the paths, I feel that the characters are treated like, well, characters.  They start out as easily identifiable archetypes, but the routes centering around them offer more complexity to given characters than what one would initially assume, and some routes offer genuine character development.  Every completed storyline has some sort of arc that characters undergo and follow, and many of the uncompleted ones still feature palpable changes to the main characters of that route.

The changes even apply to John who, despite initially seeming to be in the same vein as the sort of self-insert blank slate protagonists that are seen in a deluge of Japanese visual novels, shows enough displayed personality to feel as if a cohesive character.  He is often seen as being lackadaisical, aimless, and a bit of an idiot based on the massive number of stupid decisions he can make throughout the game, yet other routes do highlight some of his finer points and contain character-related tidbits that make him a more enjoyable character to follow in other routes.  He displays some introspective thoughts at times, possesses a diverse vernacular, and when the time calls for it, he comes up with surprisingly good ideas and proves himself to be quite capable. I could easily go on praising the game for hours, highlighting parts that I liked, or scenes that I enjoyed, extrapolating what made them work.  Though for as much as I really enjoyed my time with Student Transfer Version 3.0, there are a few quibbles that I should bring up.  The first not necessarily being a problem as much as it is part of the game.  Student Transfer contains a good amount of sexual content, mostly in the form of a few sex and masturbation scenes sprinkled throughout the story, and a fair amount of female frontal nudity.  This sort of thing may detract some people, but these scenes are not too common, not a major focus of the game, and are actually weirdly appropriate given the subject matter.  They are scenes that enhance the story, rather than taking away from it.

The second quibble is that the game could stand to be punched up in a few scenes where the writing has room for improvement, while others have minor grammatical errors or typos that have most likely already been fixed in the master file, and is not too surprising for a project like this.  While the third and biggest quibble is that of navigation.  Despite being a massive sprawling visual novel, Student Transfer does not feature a direct way to view what progress the game has made.  There is no way to view the possible endings, see what paths have not been fully explored, or anything of that sort. Because of this, I have been making flowcharts for each version of the game, which the developers have seemingly adopted as being a good enough solution, and while I do wish the game itself signified player progress in some way, if you use my flowcharts, which are available at the end of this review, you should be good to go.  But I have to say that making these flowcharts has gotten rather… insane due to the massive sprawling nature of these routes, and the variables within them.  I actually had to look into the game’s files in order to figure out how certain things worked or were triggered.

Moving onto the presentation, Student Transfer is a hodgepodge of assets (sprites, backgrounds, and CGs) borrowed from a variety of visual novels (mostly eroge) that do not always mesh well when placed side by side.  However, it is functional, a whole lot more practical than making unique assets for what is and will always be a free game, and with Version 3.0, the dev team has edited the sprites for almost every student featured in the game to give them a universal uniform.  It goes a surprisingly long way to making the game seem more polished, though that is not the only thing. The game’s user interface is simple yet slick, as opposed to the more default Ren’py look that I have seen pop up in certain premium titles.  The music is appropriately inserted, and despite being all royalty free tracks that I surely heard elsewhere, it manages to be weirdly appropriate.  While the game’s effects are surprisingly robust, featuring a good amount of effects that are given an unnecessary flare to them, and a “animation system” that has characters plop around, shuffle like they are doing a little dance, and tumble down in a manner that, for some stupid reason, I always found amusing.

I should also mention the scenario feature.  With version 2.0, Student Transfer gained the ability to support independent scenarios that can be created by anyone with the sufficient knowhow.  Since then, a little over thirty scenarios have been released.  While the quality is all over the place, and a lot of them have been seemingly abandoned, they serve as a nice way to add further value to the game, further involve the community, and provide said community with more content between each new version of Student Transfer.  Those interested can find a list of scenarios here. Since its initial release back in 2015, Student Transfer has improved, evolved, and grew quite considerably.  From a game that I considered to extensively be a Press-Switch fan game but with more anime-inspired characters into something that can easily stand on its own as a place where interesting and enjoyable stories are explored, dealing with subject matter that I am still enamoured with, and written by people who clearly understand how to use it to a story’s advantage.  The developers have clearly put a lot of hard work into this game about mind control, body swaps, and sex transformations, and goldarn, it shows. 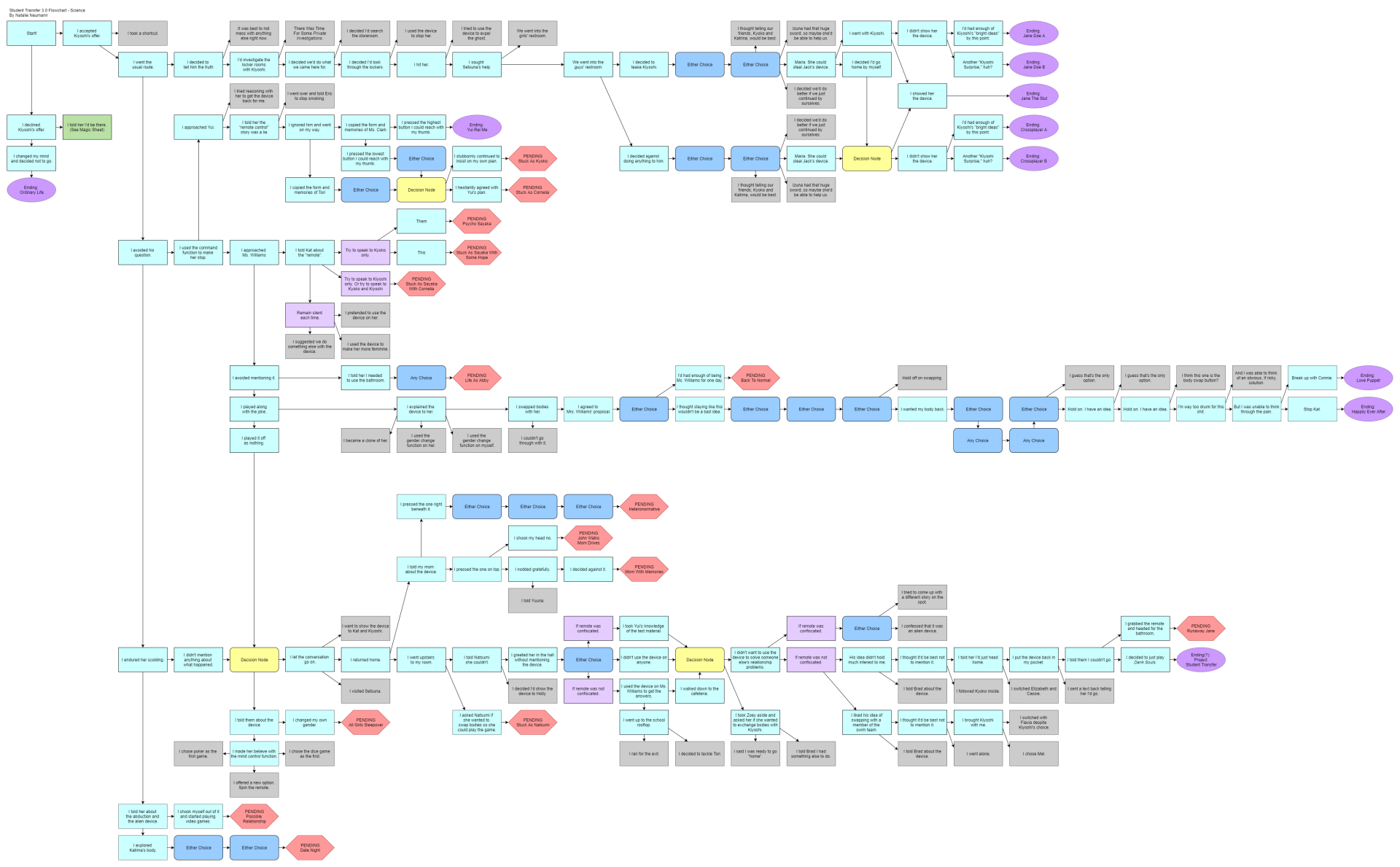