Getting the semantics out of the way first, Muv-Luv Unlimited in curiously named the second game in the Muv-Luv series, following Muv-Luv Extra, and is in included in a compilation simply called Muv-Luv.  The series is regarded as being “the most highly-acclaimed visual novel series of all time” and is known for how the series shifts from being a fairly typical if incredibly well made comedic dating sim into mecha driven drama over the span of three games, with Unlimited being where that shift happens, although not as elegantly as I would have been led to believe.

Muv-Luv Unlimited begins with series protagonist Shirogane Takeru finding himself displaced in a world different from the peaceful and joyous one he knew from Extra.  In this world, humanity has been at war with an alien race known as BETA for the past several decades, and has been losing quite considerably, with the entire world restructuring itself around military operations against these invading forces.  After being apprehended as an unidentified refuge by the militarized United Nations, Takeru meets up with one of many recurring characters from Extra and after telling his story to them, is enlisted into the military as a mecha pilot, where he reunites with alternate universe versions of his classmates.

What ensues is a sort of coming of age story for Takeru where he learns that he is no longer in his carefree easy going life and that he needs to mature, hone himself mentally and physically, and become a man in order to survive in this harsh reality, only driven by his newfound squadmates and his hopes of someday returning to his home universe.  With the story’s structure reflecting this by focusing on Takeru’s maturing during the first half of the story before it then chooses to focus on him and his friend’s training as mecha pilots while shining additional light on the rest of the cast and their personalities, inspiring the player to choose which of the five heroines Takeru should wind up with, as is to be expected after Extra.

It is ultimately a solid story with good character moments and development, but one that lacks the same deliberate pacing and structure that I found to be crucial to what made Extra so enjoyable.  Just to name some examples, Takeru and his friends do not graduate until the final chapter of this story, and are never shown confronting the BETA, despite the story making them out to be such an important aspect of this world, and telling the player a lot about them.  The entire game comes off as something of a prequel title, given its focus on setting up Takeru and this world, while also choosing to end on a very finite note that comes off as awkward narratively despite its quality writing.  The story itself is littered with unawnswered questions.  While the more comedic aspects are handled with less grace than I would have anticipated.

I lavishly praised Extra for being one of if not the funniest game I have ever played, and much to my surprise, Unlimited tries to capture some of that same tone despite taking place in a notably darker setting.  As far as I am concerned, there are three types of comedy featured throughout this entry, and they succeed to varying degrees.  The best is the comedy that stems from how Takeru is from a different world, and is not used to the customs, culture, language, and history of this world.  Thereby causing a large number of humorous moments that make a lot of sense given the story’s premise, and feel appropriate in the context of the story.  My favorite being when Meiya gets addicted to Takeru’s Game Boy Advance, which for some reason travelled with him across worlds, because she thinks it is a training tool.

Then there is personality driven comedy, where the characters’ eccentric and oddball traits are the source of a multitude of gags and goofs.  This makes sense given the vibrant and colorful personalities instilled to each character, though I did find it a bit hard to believe that the entire cast would have such similar personalities to their counterparts in Extra given their life circumstances.  While I can chalk some of this up to Takeru’s presence causing them to act this way, I felt that the writers could have done more to differentiate them all from their Extra counterparts.

Meanwhile the final type of comedy, which I refer to as anime styled shenanigans, really do not fit in the context of this story, and clash dramatically with the more serious moments.  With the absolute worst example being in episode 8, which begins with a hair brained scheme to trick the a government official to think that his daughter, Miki the bubbly cat-like loli, is the leader of Takeru’s squad.  Hijinks ensue, the official behaves like a child while around Miki because isn’t that funny, and stirs some bad blood between the rest of the cast and Miki.  All before everything comes to a dramatic stop after DEFCON 2 is declared and Miki is given a rather exceptional character moment that is only undermined by what came before it.

In fact, I think the dramatic moments were actually the highlights for me all around, as they are both well directed and constructed, and are heavily enhanced by how well the player would know all of these characters, assuming they played Extra.  They can be quite heartfelt, tense, or even action packed, reaching a level of mecha action that is beyond what I would have expected from this game, even after the stellar presentation of Extra.  As a whole, the presentation is so detailed, unnecessary, yet deliberate, it continues to outshine just about any other visual novel on the market, despite being a 14 year old game.  Basically all the praise, and the few criticisms, I afforded Extra apply here too.

Yet despite its quality, there are elements of Unlimited’s presentation that I found to be tonal missteps.   It’s all little things, like the recycled upbeat and energetic music that rarely ever fits this setting.  The extravagant hairstyles possessed by certain characters, when they are supposed to be in the military.  And the fact that characters still wear foofy school uniforms sometimes despite the fact that, again, they are soldiers.  None of these individually are more than nitpicks, but combined with the occasionally misplaced comedy it makes it harder to take this story seriously.  It is still thoroughly entertaining, but the tonal roadmap of the game, both narratively and with regards to its presentation makes it difficult to pinpoint what the game is going for, what it is trying to be, and so forth and so on.

I think that is the ultimate problem with Unlimited.  It is trying to be a comedic game similar to Extra, while shifting things into a more serious direction, but never strikes the same balance the first one had, with the final product feeling improperly balanced and as a result, lesser than its predecessor.  It is still a high quality visual novel, easily a great title on its own, but comes off more as an awkward middle chapter when compared to Extra, created primarily as set-up for final chapter of this trilogy, Muv-Luv Alternative. 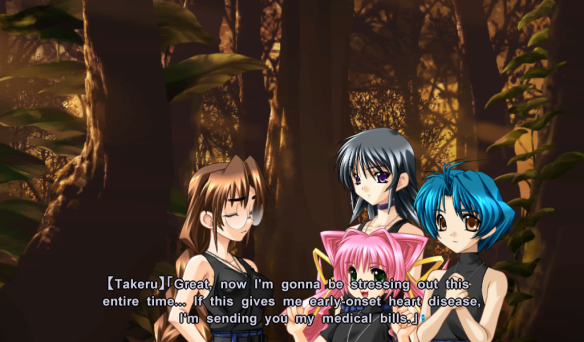