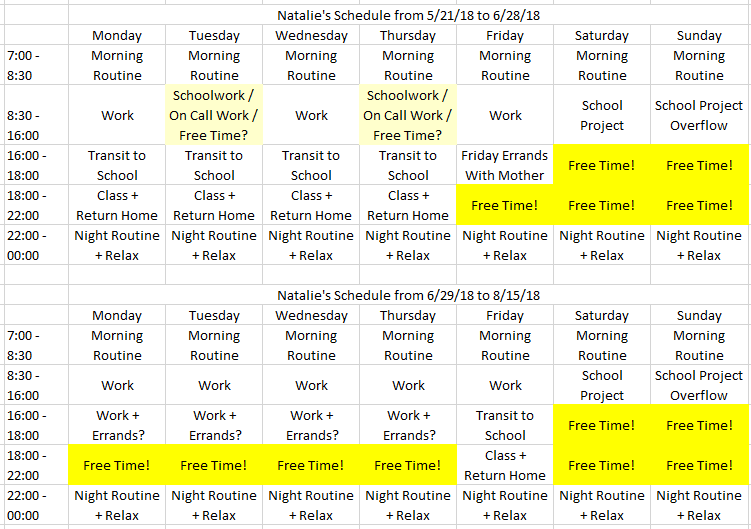 With Pre-E3, or PRE3 as I like to call it, gearing up with the expected preamble of last minute announcement, showcases, and, of course, information leaks, I should probably inform everybody that I will not be able to cover E3 in my usual fashion.  As you can see from the header image, my upcoming schedule will be rather busy during the first half of summer, and I will have very little free time. Heck, I doubt I will even get to watch any press conferences in full on Monday. I would complain, but this is how the world works, and those who take umbrage with it have many colorful ways of separating themselves from it.

Summarizing this week of news instead, things began oddly with the announcement of Resident Evil 7: Biohazard Cloud Version for the Nintendo Switch.  The game is to be an always online cloud based port of Resident Evil 7, complete with all of its DLC, made available for the handheld/console hybrid.  The title came out this past week in Japan, where it costs a 2,000 yen (~$19) in exchange for a 180 day “play ticket”.  While this whole affair seems a bit strange, I actually think there is some promise in developers bringing over PS4 and Xbox One games to the Switch via online streaming.  While there are some worries with the Switch being a handheld, and good wifi not being a constant, there is potentially a market for games such as these, especially given the fervorous nature in which Switch owners have been purchasing games.

Following the release and success of Yakuza 0, Kiwami, 6, and with the upcoming western release of Yakuza Kiwami 2, many new fans of the series have been wondering about the possibility of a remaster or port of the PS3 exclusive titles, Yakuza 3, 4, and 5, for PS4.  Well, that’s exactly what’s happening.  Sega have announced that Yakuza 3, 4, and 5 will all be coming to the PS4 in the relative future, wherein the games will run at 1080p and 60 fps.  No western release of these ports have been announced, but it is nearly inevitable considering the newfound western fanbase.  It is certainly a nice piece of news, although I cannot help but think about two things. The distinct possibility of people growing tired with the series after playing 7 games within a few years time.  Along with the fact that I still would really like to see this series come to PC… because that way I could play it.

In the past few months, I have observed a lot of wonder amongst the general gaming community about the next generation of Playstation and Xbox consoles, in spite of the fact that this generation contained half-step power increases like the PS4 Pro and Xbox One X.  Furthermore, I am under the impression that the next generation of these consoles will bring forth many changes to how things will be handled going forward, and possibly the end of proper console generations, though said shift is still a few years off.

I bring this up due to various statements made by the CEO of Sony Interactive Entertainment, who made comments about the PS4 entering the final phase of its life cycle, how the next Playstation is about three years away, or in 2021, and implied that some notable changes will occur in the next generation.  Most notably a focus on backwards compatibility, which would make the next generation something of a continuation of the current one, along with a possible introduction of the ability to play more games via streaming services.  It is interesting stuff, but with the release and reveal of this next system being 3 and 3.5 years away respectively, I think that most speculation at this time would be, well, futile.

Corpse Party is one of those series that I have wanted to get into for a while, yet is one of those niche Japanese games with a weird release history that makes it hard to get into.  Seeing as how the original game was remade for PC 12 years after the fact, which is the one I bought, and started to play until I learned that the game was remade again for PSP, and even later for 3DS, with each version containing unique content.  I bring this up because Corpse Party 2: Dead Patient, not to be confused with Corpse Party: Book of Shadows, the PSP sequel, was recently announced for a western release by XSEED, and will come out on PC this fall.  While all of these games are mostly standalone titles, this messy release history with a lot of platform jumping always dissuaded me from giving them much of a shot, and I have a feeling it will stay that way.  Well, unless they are all bundled together as a Switch game or something.

Remember Sunset Overdrive?  That open world action game from Insomniac that is remembered as being one of the few Xbox One exclusives that people genuinely enjoyed, yet also possessed this tryhard sense of humor that often fell flat on its face?  Well, a Korean rating for a PC version of the game appeared online, and as I always say, ratings boards are typically very reliable sources when it comes to this sort of thing, so it is likely that the 2014 will be making a belated move over to PC.  Now the only questions are whether or not it will be a Windows 10 Store exclusive, and if this port will lead into a possible sequel.

Speaking of PC ports, it was announced two months ago that Grasshopper was remastering two of their cult classic titles, Killer7 and Flower, Sun and Rain.  The announcement itself was shrouded in some confusion, but a piece of follow up news arrived, just a few hours before this rundown went up, in the form of an announcement trailer for a PC port of the Killer7.  Not many details about this port were revealed beyond a few new names being attached to this project and a fall 2018 release window, but simply hearing confirmation of the game’s existence is enough to fill me with a morsel of excitement.  The lack of a home console release does strike me as a bit odd, but such things can always be announced at a later date.

That’s about everything I have to cover for this week, but I am sure the next one will be a real doozy.  Until then, see ya.