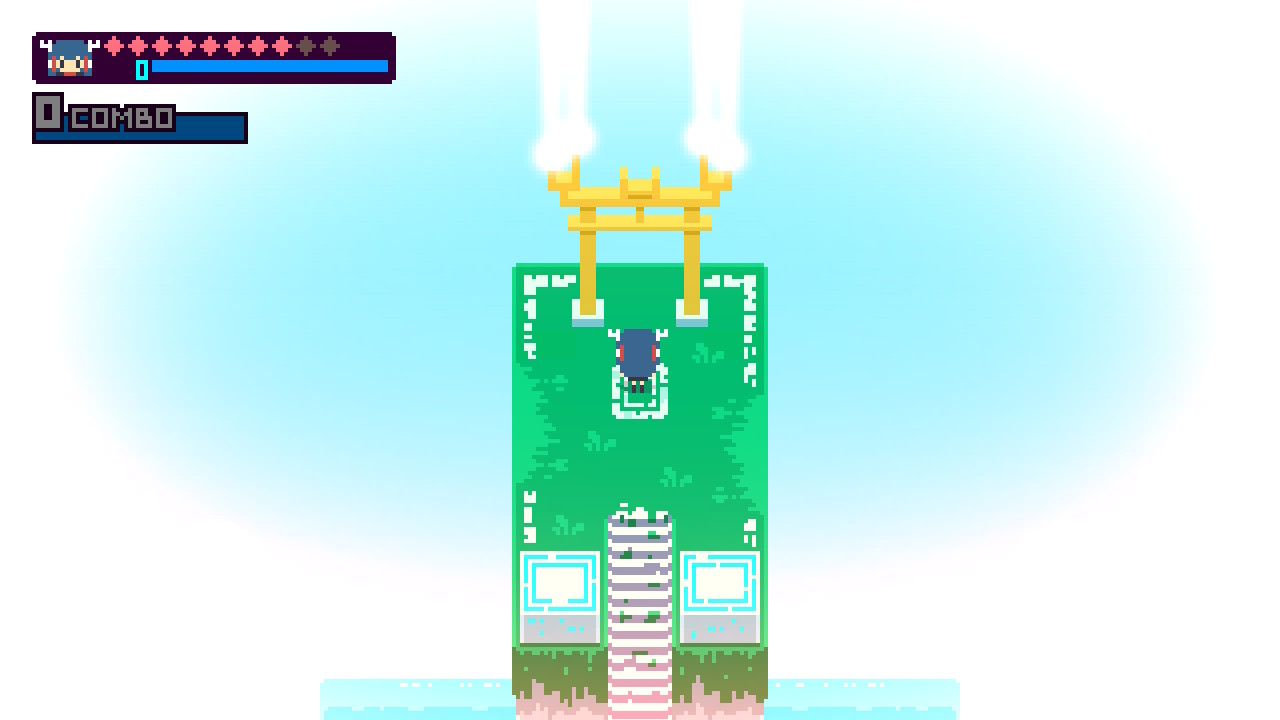 Dash, run, and do it better next time.

Skipmore is a developer that I remember quite fondly from back when I was a moneyless teenager who spent a lot of time on flash games.  As their retro-styled RPG titles such as Synopsis Quest and Fairune were brief yet endearing little titles with high quality retro sprite work based on the standards of the time.  So when I heard that they were not only still around, but were also making a full retail title, I pegged it as a game that I would get around to eventually, which just so happened to be my first Switch title thanks to a shipping error. 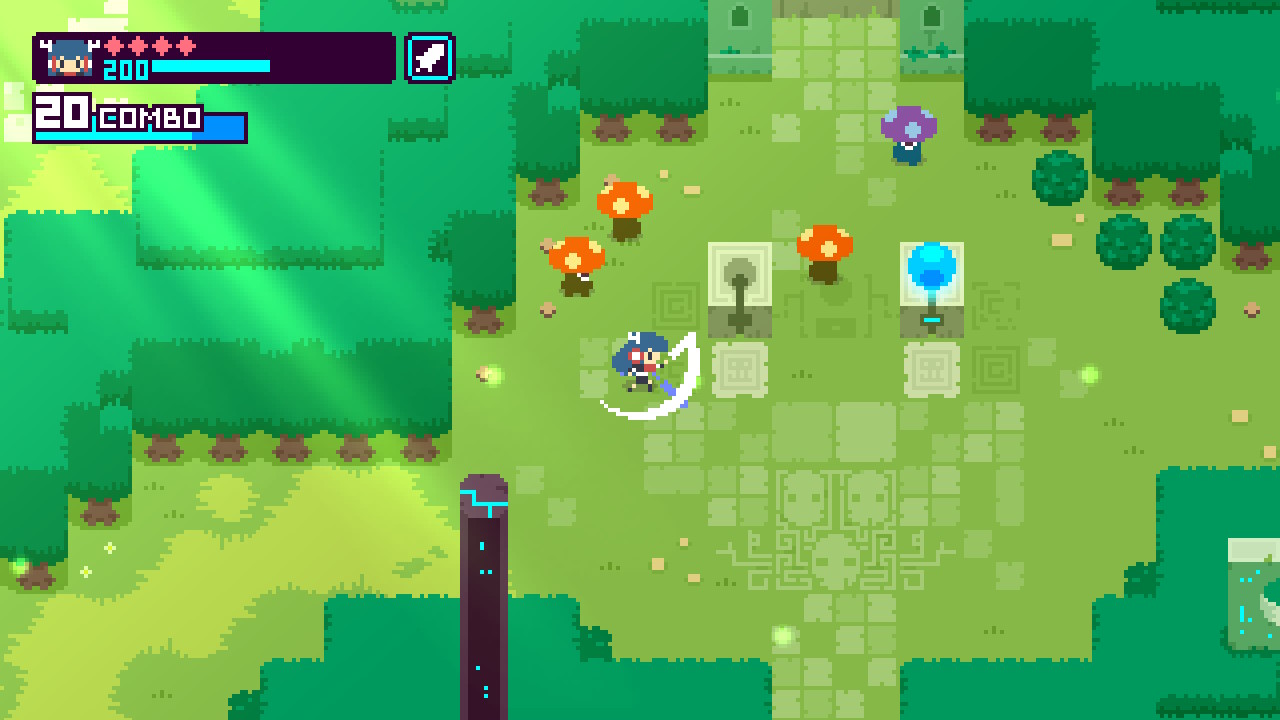 Kamiko is a retro-style action game centered around one of a trio of playable shrine maidens tasked to save the world from some nebulous darkness or evil that is threatening the sanctity of the world as told through a story so minimal and unnecessary that it may as well not even be there.  More specifically, it is an overhead action game with basic puzzle elements such as pressing switches and carrying magic orbs, broken up into four levels where the player must purify four shrines in order to open a portal to a boss battle.

If I were to compare the title to anything, the first thing that comes to mind is actually the first two Ys titles, specifically their remake, Ys Chronicles, as both titles possess fast and somewhat hectic combat that prioritizes rushing.  But instead of the bump system where combat consisted of ramming into enemies at an angle and waiting for their life to drain, each playable character has their own unique weapon.

Yamato is the cover character and as a basic sword user has a direct and effective melee attack that is fluid and responsive, but occasionally can result in some cheap hits when rushing into swarms of enemies.  Uzume is an archer that fires a pattern arrows, allowing her to deal good damage with the best range in the game, but her close quarters capabilities are limited, which only becomes a big deal when absentmindedly running into areas where enemies spawn.  While Hinome is the quirky third one that uses frisbee of death and destructions with a range of half a screen that boomerangs back to the player and can be tossed in 360 degrees.  It is an interesting idea, but makes certain situations dramatically more difficult than others, and comes with a secondary weapon in the form of an ineffective knife that may be used when the frisbee is airborne.

Most combat situations follow the same tenants of dispatching large numbers of enemies while maintaining distance when needed and avoiding the projectiles dispensed by some of them.  However, combat is really only necessary in two situations.  Either as a means of carving a way through past enemies or as a means of accumulating a combo in order to generate SP.  SP functions as both the player’s super meter along with a currency of sorts used to unlock chests, open doors, and purify shrines as the layer navigates through the levels, which are arguably the true challenge of the game.

I feel that I can best describe the maze-esque level design by calling back to my first experience with this game, which had me running aimlessly through a fairly small series of interconnected paths, feeling my way around with no idea what the greater environment looked like, or what my destination was.  Oh, and respawning enemies only made the endeavor of exploration more frustrating, at least before I learned that so long as one enemy per group remains, the entire group will not respawn.  Needless to say, it did not make for a particularly enjoyable first impression, one that had me practically begging for a map or some form of guidance as I made my way through and savescummed my way to understanding this game’s map structure mentally, effectively creating an objective list and directions I could follow in subsequent playthroughs with different characters.

I was mostly able to do this because of how the game can be cleared in as little as 30 minutes, making the game itself very brief.  As for whether or not I wound up enjoying my subsequent playthroughs… yes, I did, but the experience was also nothing remarkable, and I had to spend an hour drudging through the game to reach said experience.  It is an abnormal conflicted feeling that I do not think I have encountered before, where a game as simple and brief as this has a learning curve so severe that it could amount to over a third of one’s playtime if they were to aim for the closest thing this game has to 100% completion. 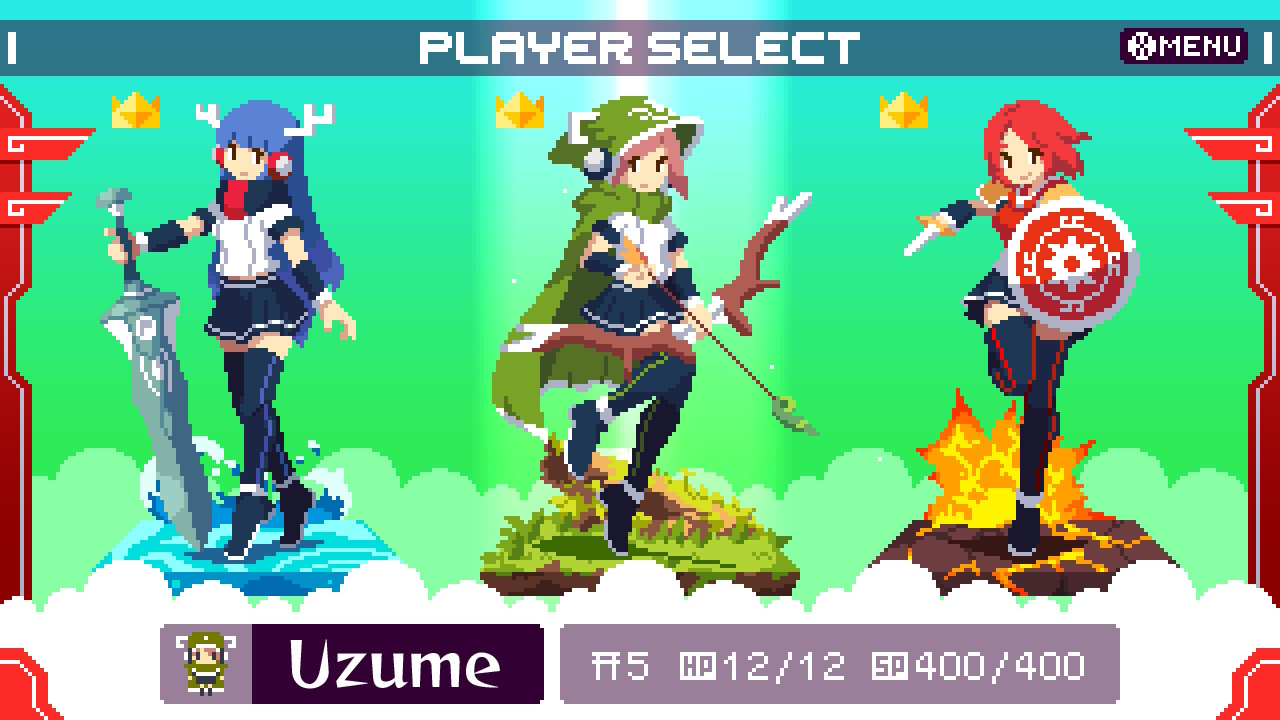 As for the presentation, Kamiko features something of an evolution for the eveloper’s art style, retaining the general chibi look seen in their earlier endeavors but forging outlines and at points adopting a more abstract art direction that reminded me of Hyper Light Drifter with its use of colors, and certain environmental designs.  Enemy types are numerous, each area is different from the one before it, and while the themes follow a lot of established archetypes, they do evoke a sense of being ancient ruins that had been lying dormant for years that had been infected by some form of nebulous darkness.  As a whole, I would say that it looks quite good, utilizing a retro aesthetic well, and resulting in a colorful and attractive title that also boasts a pretty jamming soundtrack to boot.

While there is something to gain in mastering the designs of Kamiko and racing through it many times, it is the same thing each time, and mechanically strikes me as very reserved.  It is not a bad game, but Kamiko is a two tiered experience with a rough first playthrough before improving during the second, but ultimately coming off as something that I have no real desire to go back to.  An overall rather average fancy that will hopefully lead its developers into creating something more refined and impressive. 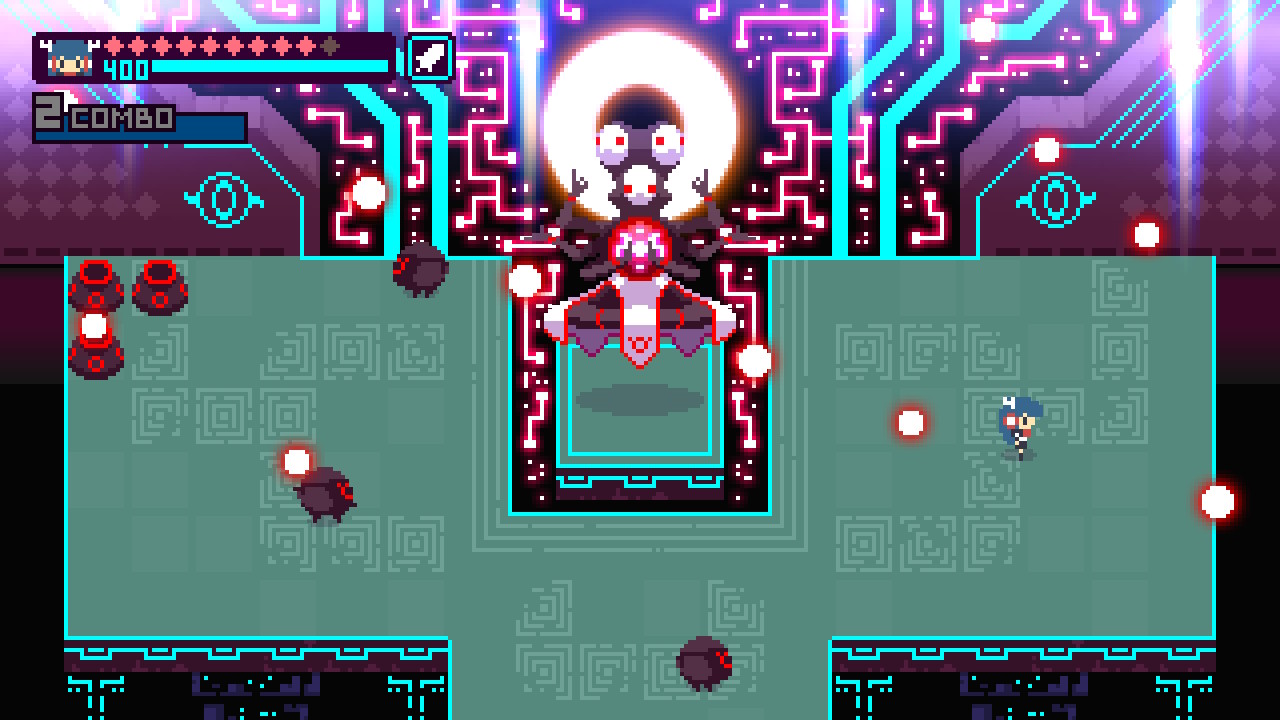