So, just a few days ago I released The Saga of Vincent Dawn, and while I am ultimately happy with the finished project, I am aware that some of the writing seen throughout the story is not up to my previous writing standards.  The act of going through and summarizing a hundreds of pages of poorly written text is an arduous process, especially when it is very personal to you, and when it came time to edit it all once more, my patience grew slim, as I just wanted to be done with the project and get started on the next one.  Though considering how I am still working on the outline, I really have no idea when it will be done. But it will get done, ‘cos I’ve got a story to tell and I’m gonna tell it no matter what, even if nobody actually reads it.

A few weeks ago, Bandai Namco held a Dragon Ball related event where they announced that they were working on a new action RPG project based around Dragon Ball Z, tentatively titled Project Z.  With that announcement still fresh in people’s minds, they chose to once again bring the title up, because the more stories your game generates, the more interest it builds up, in theory anyways, and gave it a proper reveal trailer.  As one would have expected, it is yet another game that follows the storyline of Dragon Ball Z, capturing the key moments from the beloved manga and anime series, reformatted into a video game format for what has to be the 20th time at this point.

Now’s a pretty good time to mention that I grew up with Dragon Ball, albeit in a very disorganized manner where I watched Buu saga and the original Dragon Ball series at the same time.  I eventually caught the rest of it through a mixture of syndication, manga from my library, and a 50+ tape VHS collection I bought off eBay for $70 when I was 9.  I also had, and still have, a couple dozen Dragon Ball Z toys that I played around with a lot, and broke fairly frequently, leading to a number of crazy glue-based surgical operations.  I also had some wackadoo bootleg Chinese Dragon Ball GT toys that I got before I knew anything about GT, but I think I threw them away or something.  Anyways, despite that strong nostalgic tie, I have never really been interested in Dragon Ball video games, mostly due to how a lot of them were not very good, were dedicated fighting games.

However, action RPGs certainly fit within my loosely defined wheelhouse, the trailer showcased some impressive visuals, there seems to be some greater element of exploration and traversal, meaning that the very interesting world of Dragon Ball could be fleshed out, and the project is being handled by CyberConnect2.  Say what you will about their messy history this past generation, but they remain a talented studio that, at the very least, makes some amazing looking action scenes, so even if it is a very gameplay light romp from Radditz to Buu, it will be a pretty one.  …Goodness do I want a big budget original Dragon Ball game.

The Epic Games Store initially got a lot of people excited, optimistically proclaiming it to be a new era, and an end of an era for Steam because a hip new kid arrived at the scene, flashing fistfuls of Fortnite funbucks.  However, Epic’s main method of competing with Steam has involved them securing year long exclusivity deals for titles like The Walking Dead: The Final Season, The Division 2, and Metro Exodus, despite all of these games initially being listed on the Steam storefront.  While I am not opposed to the idea of temporary or launch exclusives, the 1 year limit imposed strikes me as overkill, and it does not so much represent a choice as much as it forces the player to either wait or deal with a new service that lacks many features.  Many people have voiced similar criticisms, and even THQ Nordic, the parent company of Metro Exodus’s publisher, spoke out about this practice, claiming that they want their portfolio to be on a diverse range of platforms, and let the players choose their preferred platform.

not want to categorically exclude the possibility of timed exclusives for any of our games in the future, but speaking in the here and now, we definitely want to have the players choose the platform of their liking and make our portfolio available to as many outlets as possible. pic.twitter.com/oOI52rLDAi

Continuing this trend of digging up old stories, remember how Belgium banned loot box mechanics and then EA, being the super special saucy scuzzbucket they are, decided to keep their loot boxes in FIFA?  Well, EA has finally caved in, and removed these features from the FIFA games, while issuing a sad little press release that hems and haws over how Belgium is not interpreting their own laws properly, and how they are no longer able to offer players the ability to pay for power.  Seriously, this statement is just pathetic in how dedicated it is to the idea that Loot Boxes are a good thing, and also telling people that this will not impact their financials, which is why they made such a big fuss about it earlier.

I regularly proclaim that China is going to become a massive force in the world of gaming as time goes on, and will gradually shed its image as being a den of bootlegs into being a force that will rival the western industry, or at least play a significant role within it.  I bring this up because Chinese PC and mobile developer NetEase recently acquired a minority share in Quantic Dream, the French studio responsible for Heavy Rain, Beyond: Two Souls, Detroit: Become Human, and that one garbage Dreamcast adventure game with David Bowie in it that was all about transdimensional possession.

This acquisition means that Quantic Dream will no longer be a dedicated Playstation developer, and will shift to a more multiplatform approach that could really be anything at this point, and may result in some more varied projects.  Though I doubt I will be interested in any of them, because, well, their are better experienced via Let’s Plays or streams, and the Super Best Friends aren’t going to get the gang back together for the 6th entry in the Sadness series.

Shifting gears all harsh-like, because that’s how I roll, Nintendo recently updated their quarterly financials and with it their sales data for their best performers and current hardware.  The main takeaway from this is that Pokemon Let’s Go Eevee and Let’s Go Pikachu surpassed the 10 million sales threshold, while Super Smash Brothers Ultimate, in less than a month, sold over 12 million units.  Meanwhile, Switch sales are already near the lifetime sales of the Nintendo 64 at 32.27 million, despite being on sale for less than two years.  This all speaks very positively of Nintendo’s current output, and demonstrates the power they have over consumers.

Oh, but what of the upcoming Switch revision that people have been hearing about for half a year now?  Well, reputable Japanese business publication Nikkei claimed that Nintendo is working on a smaller version of the Switch with a focus on portable play set to release as early as this year, along with another online service of sorts aimed at their enthusiastic core audience.  Now, this is technically just a rumor, but rumors beget speculation, and I quickly took to an idea that I saw in My Game News Flash’s rendition of this story, which featured a mockup of a Nintendo Switch Mini with controls built into the system itself and would supposedly be distributed with no dock, but remains compatible with Joy-Cons and the Dock if one wants to purchase them separately. 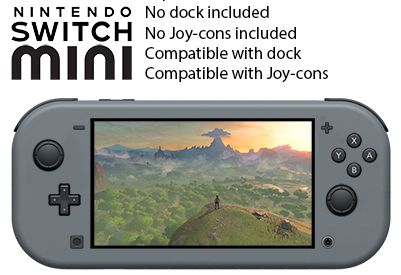 While this does somewhat go against the modus operandi of the Switch, that being easy multiplayer capabilities and the ability to seamlessly function as a handheld of a console, it would be a good way to reduce costs, and is not too dissimilar from the Japanese exclusive Switch SKU that forgoes the Dock, Joy-Con Grip, and the charging cable for $250, which is kind of a bum deal when considering how much the Dock costs.  As for the other online service, my heart is saying that it must be an expanded library of pre-selected classic games accessible for an annual fee, much like their current NES offerings, but for SNES, GBA, and maybe possibly GCN titles, mostly because I want to play Metroid Zero Mission and Super Mario RPG again.  But Nintendo will probably pull a Nintendo and do something far more baffling, ‘cos that’s how Ninten-do!

That about cover it for this week, but before fading away, I want to talk about some trendy hotness, Kingdom Hearts III.  Now, I’ve never played any of the games, but I have watched 2 and a half retrospectives (BestGuyEver, AntDude, Clemps) on the story so far, and have a good grasp as to what the series is about.  Ultimately, I feel that the story suffers from many of the same issues that plagued the Final Fantasy XIII trilogy where things are not that complicated if summarized before you, but are very difficult to comprehend in-game due to poor storytelling techniques.

Also, I find the series to be rife with a form of artistic dissonance, as the original and Final Fantasy content neither artistically nor tonally compliment the Disney content, and whenever the Disney content is brought up, it feels like a bizarre mix of corporate meddling and fan fiction.  Maybe I am just saying this because of the apathy I feel towards most Disney films, but I would much rather Kingdom Hearts be its own silly edgy action game series, rather than needing to accommodate the accoutrement of another company’s intellectual property.

I know that’s probably not a very unique hot take, but it’s been on my mind all week and I just wanted to shout it into the void.  Anyways, I’ll be back with a trio of reviews this month, and then I’ll have another Ramble, as I like writing these more long-form long winded think pieces about topics I am passionate about, and they’re easier to schedule than proper game reviews.

Header image is from the anime Kill La Kill.