A game wherein no Magi Trials to speak of occur, but it’s got TG stuff in it, so whatever.

Magi Trials, or to use its full name, Highschool Romance: Magi Trials, follows an intrepid young magic user by the name of Shaun who, wanting to secure entry into a prestigious magic academy, elects to dabble in the dark arts in an attempt to grant himself magical prowess.  But something went wrong in the spellcasting process, and instead he up an turned himself into a woman. After botching his magical entrance exam, his transformation is discovered by one of the teachers, Magi Shira, who promptly takes him under her wing, and sends him down a winding path where he must forge a new identity for himself as Sophie, while also trying to be the best gosh darn magic user there ever was.  The ensuing tale follows Shaun, or rather Sophie, as they come to terms with their predicament, trying to make the most of it, learning as much as they can before the next entrance test, which is specifically not a Magi Trial, and forge bonds with the trio of women they are surrounded with. 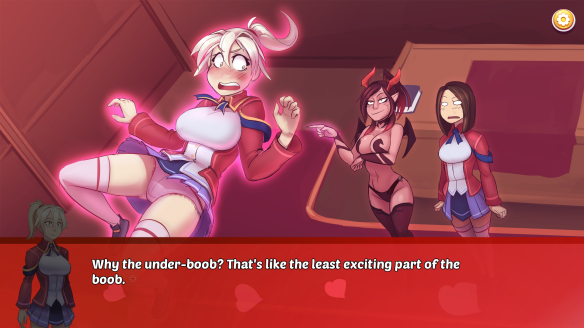 This includes their instructor Magi Shira, a hard teacher who nevertheless supports Sophie and plays an interesting role in latter parts of the story.  Their female classmate Charlie, who serves as rival, romantic interest, friend, and a source of TG-related tension throughout the story, their grounded personality and interesting background both going to make the character surprisingly endearing.  Along with Eri, who comes in later on in the story, where she serves as a welcome source of erotic comic relief, being a succubus that only Sophie and Charlie can see. Kind of like The Great Gazoo, but with lewd puns. Which automatically makes her the best character in my book, even if she does not really have her own route or ending.

As for how this all comes together and plays out, I was actually pleasantly surprised with Magi Trials after having gone through two prior Dharker Studio titles, Highschool Possession and Highschool Romance, mere weeks ago.  The characters are more entertaining and well defined, coming off as personalities that the writer genuinely wanted to explore.  The dialog can be very jokey and silly at points, but it plays to the writer’s strengths, and manages to be serious when it needs to be.  While the actual storytelling is paced well, has emotional highs and lows coupled together, and results in a fairly straightforward yet nevertheless engaging story that culminates in several satisfying conclusions.

My only major qualm with the title is how it has a very nebulous sense of setting and greater mythology, treating the subject of magic with a narratively convenient looseness, and regularly leaving me confused about what level of technology is present in this world.  Between the fantasy-styled medieval architecture, use of torches for light, reference towards salads, magazines, and presence of modern looking clothing, it all came off as inconsistent, but then Eri the invisible succubus referenced the “notice me Senpai” meme and I realized that the writer probably did not care much about world building to begin with.

On that note, I should clarify that the writer for Magi Trials is Kyazda, who coincidentally also happened to be the writer for Highschool Romance and Highschool Possession, and their level of improvement seen here is actually a bit unprecedented considering how all three of these titles were released, and presumably written, within a 12-month period.  It really does make me wonder what sort of conditions Kyazda was under when making some of these titles, the creative freedom she was afforded, and just what was happening throughout the development process.

As for how Magi Trials fares as a TG story, it hits the expected marks early on.  Gradual realization, faulty disguise attempt, the protagonist needing to present themselves as the opposite gender while trying to acclimate to it through a variety of awkward encounters, and so forth and so on.  Still, it hits the notes it needs to, and certainly does a better job at the whole TG and presenting oneself as another gender thing far better than its predecessors.

The only thing I find odd about the way this plotpoint is handled is how it becomes something of an afterthought as a while, to the point that none of this game’s endings feature Shaun/Sophie pursuing their male identity and form.  This is actually something of a rarity among TG visual novels, with the only exception I can think of being Max’s Big Bust.  Which, come to think of it, also featured a vaguely sarcastic, semi-perverted, thickheaded platinum blonde protagonist whose sex is changed against their will by a loosely defined magical entity.  Huh.

As the screenshots illustrate, the artist behind Highschool Romance reprises his role here once again, and considering how only a year passed between both titles, I’m actually surprised by how much the art improved.  It’s still as cute, bubbly, and expressive as the original, but with regards to character proportions, general designs, and the detailed CGs, it both seems like the artist really put his all into this project, and genuinely enjoyed bringing these scenes, whether they be awkward and lewd situations or intense magical battles.

However, the backgrounds, which came from a different artist, tend to be considerably more bland, clearly taking some basis from photographs and not gelling particularly well with the character sprites.  The red dialog box is still a very awkward choice, even more so now due to Magi Trials’ reduced focus on romance. Then there is the implementation of Sophie’s sprite, which lacks any varying expressions or poses, while being framed in a way that would make their expressions harder to read.  It’s a bizarre step back from Highschool Romance, and one that just confuses me, as I have no idea what happened.  Also, the soundtrack is very forgettable, but the developers did remember to credit the music artist this time, so there’s that. 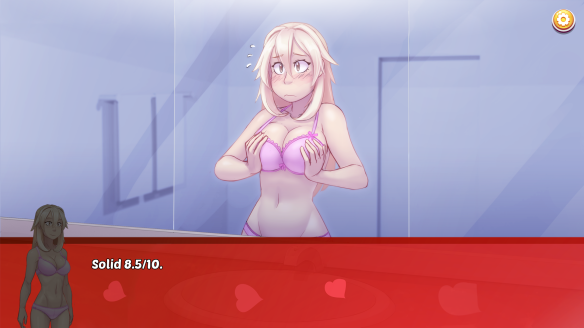 Overall, I was pleasantly surprised with Magi Trials after going through other titles in the Dharker Studio library.  It’s story is solid, characters are enjoyable, presentation is certainly above average for this tier of visual novel, the script is entertaining, and it hits just about all the notes I would have reasonably expected in a TG story.  It does have a handful of minor drawbacks, but is functional where it counts and I genuinely had a good time going through it.