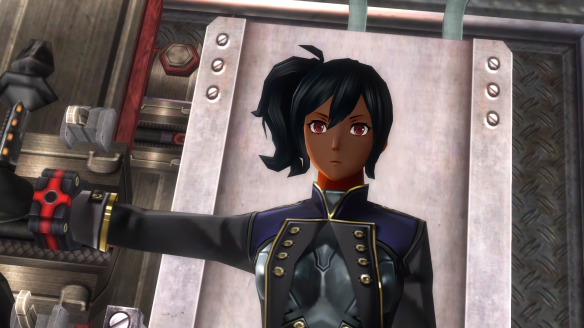 Wherein I discuss character creators, the ninth generation, an immaculate imitator, a Chinese controversy, and my own failings as a consumer.

Anybody who has looked through my reviews of Pokemon Masters, Mass Effect Andromeda, Pokemon Let’s Go Eevee, Animal Crossing: Pocket Camp, God Eater 2: Rage Burst, God Eater Resurrection, Dragon’s Dogma: Dark Arisen, or the Mass Effect Trilogy will notice a trend in what I make whenever I’m given a character creator.  I’ll almost always settle on a woman with black hair, brown skin, red eyes, and a color scheme that often incorporates purple.  This is my overpowered edgy Mary Sue OC waifu, Abigale Quinlan, who has been a staple character throughout my novels, and one who I am exceedingly fond of for assorted reasons that… I will detail at a later time.  I tend to make her because I love her very dearly, I like having a distinct looking protagonist/avatar in the games I play, and as part of some silly meta joke that I have been thinking of implementing into a novel for about 6 years now.

Anyways, I bring this up mostly because I view this general practice, that of creating an OC based on one’s personal character design preferences, as the most sensible way for people to go about making a character in games that offer a character creator.  However, there is a significant contingent of people who look at all of the assorted options available in games that support a character creator, shrug, and just make themselves. A trend that I always found to be uncreative, childish, and rather egotistical.  I get that this is a logical extension of viewing a character as a self-insert, can help with ‘immersion’, and that some people generally enjoy sticking to what they know, themselves.

Part of why I find games to be so appealing is the ability to play as and have agency over characters who are considerably different from oneself.  People of different genders, races, cultures, skill sets, occupations, and species. And I often feel that a lot of people deliberately shy away from such things whenever they look at a myriad of carefully curated options and say “yeah, I’m just going to make an idealized version of myself as best I can.”  I simply do not see the appeal in bringing yourself to life with a toolset and subsequently decking them out in the flyest fashions, when you could instead do it to a digital doll of your own creation. But then again, I’ve got body image issues something fierce, it’s called being trans, so perhaps I’m the real weirdo here.

Moving onto something more focused and getting started with the news, Sony have formally announced their next system as the Playstation 5, and its release window as being holiday 2020.  An announcement that just about everybody accepted without question, so Sony paired it with new details that were provided in an exclusive interview with Wired.  In short, they are gussying up the system’s controller by adding more advanced rumble, and it will feature triggers with adaptive sensitivity allowing for developers to customize the sensitivity and resistance of the shoulder buttons and sticks to greater emphasize player immersion.  The controller will also feature a speaker, microphone, and voice-based AI that probably doesn’t work for people with speech impediments, like me.

The UI and home screen will prioritize player engagement and socialization in order to make them more invested in the console ecosystem, which raises the amount of time spent participating in Playstation services, and the amount of money they spend on it.  But it also has fancy reflection and lighting tech at a systematic level, and an incredibly enticing sounding super-fast SSD that every interview keeps hammering on about. The system continues to look fairly promising, barring some ancilitary features implemented in order to make the thing feel like a step forward, but will likely be ignored after a short while, though the way Sony has continuously been going about this has been very… strange.  Normally you would have a single showcase detailing a system’s features, form factor, and some early games along with a few tech demos, but instead they’re keeping things under wraps while assuming the audience knows this song and dance by now… and they probably do.

Shifting over to something completely different, this past week there was a decent deal of buzz made over an innocuous independent title that announced that it was coming to Kickstarter in pursuit of additional funding.  The game, Enchanted Portals, is a co-op run and gun 2D platformer that adopts an artstyle indicative of the rubber hose era of animation featuring cutesy characters waving their gloved fingers to shoot magic projectiles at massive and elaborately animated bosses.  A description that could be interchangeably applied to the 2017 smash hit, Cuphead.

The developers, a two person team united under the banner of Xixo Games, have spoken about the negative and positive backlash they faced for revealing this game, how they really liked Cuphead, and wanted to make a game just like it.  Which I find to be an admirable goal, the imitation of something you love, and considering the level of detail and craftsmanship seen in the reveal trailer, I see little reason to criticize the developers for this decision.  Yes, it is derivative, a clone, rip-off, or whatever you want to call it, but there really is nothing wrong with that, especially when considering how many great games have come from taking, adapting, and iterating on familiar ideas, styles, and concepts.  Also, considering the state of the independent market and how hard it can be for smaller developers to break through into anything more than a modest success, just about any publicity can be considered good publicity.

But that is not always the case, as seen with the miasma that popped up after Activision Blizzard rescinded the prize winnings of Hong Kong Hearthstone player, Blitzchung, for having the audacity to voice disagreements with the Chinese government, who wanted to introduce legislation in Hong Kong.  This was met with wide protests and subsequent violence, because this is the Chinese government we’re talking about. It is an explicitly political move meant to reinforce relationships between Activision Blizzard and the stringent Chinese government, clearly putting potential profits over political activism.  Honestly, I would have expected as much, because this is Activision we’re talking about. Social justice is great, but it’s imitation doo-doo next to cold hard Yuan.

Or at least that’s what was decided upon initially, as Activision Blizzard eventually decided to modify their treatment of Blitzchung, giving back his promised prize winnings, and reducing his one year ban from Hearthstone to six months.  A change that was paired with a hollow announcement affirming that the company was in the right, but made some bad decisions along the way, and promising to do better.  Which was clearly done to accumulate some PR points, but, no, you made a calculated move, you have little goodwill with audiences, and you knew how sensitive this political situation was.

…Man, that got kind of dour.  Is there any lighter note I can end things on?  Well, Ubisoft recently announced a few new shows based on Watch Dogs and Far Cry 3: Blood Dragon, because we are finally reaching a point where the stigma around multimedia endeavours involving video games has started to simmer down, and there are genuinely good video games adaptations out there now.  I mean, nothing I have watched, but that’s because 90% of the stuff I typically watch involves a white person who was assigned male at birth rambling about video games, random rubbish, social issues, or all three at once.  …Lord do I need to diversity the media I casually consume.