Wherein I discuss my disinterest in horror, a time-limited localization, and my favorite mobage.

END_OF_DOCUMENT_TOKEN_TO_BE_REPLACED

Even a decade later, life is still beautiful.

END_OF_DOCUMENT_TOKEN_TO_BE_REPLACED 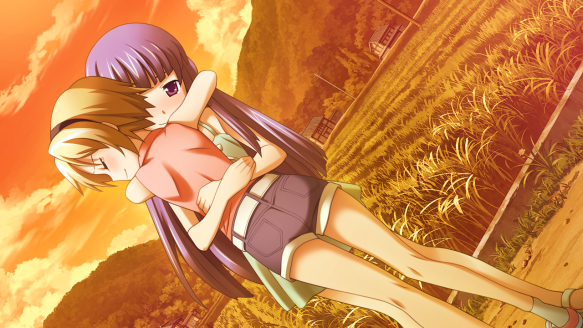 Through determination, luck, and New Game Plus, the truth shall be revealed, and a miracle shall save us all… or not.
END_OF_DOCUMENT_TOKEN_TO_BE_REPLACED 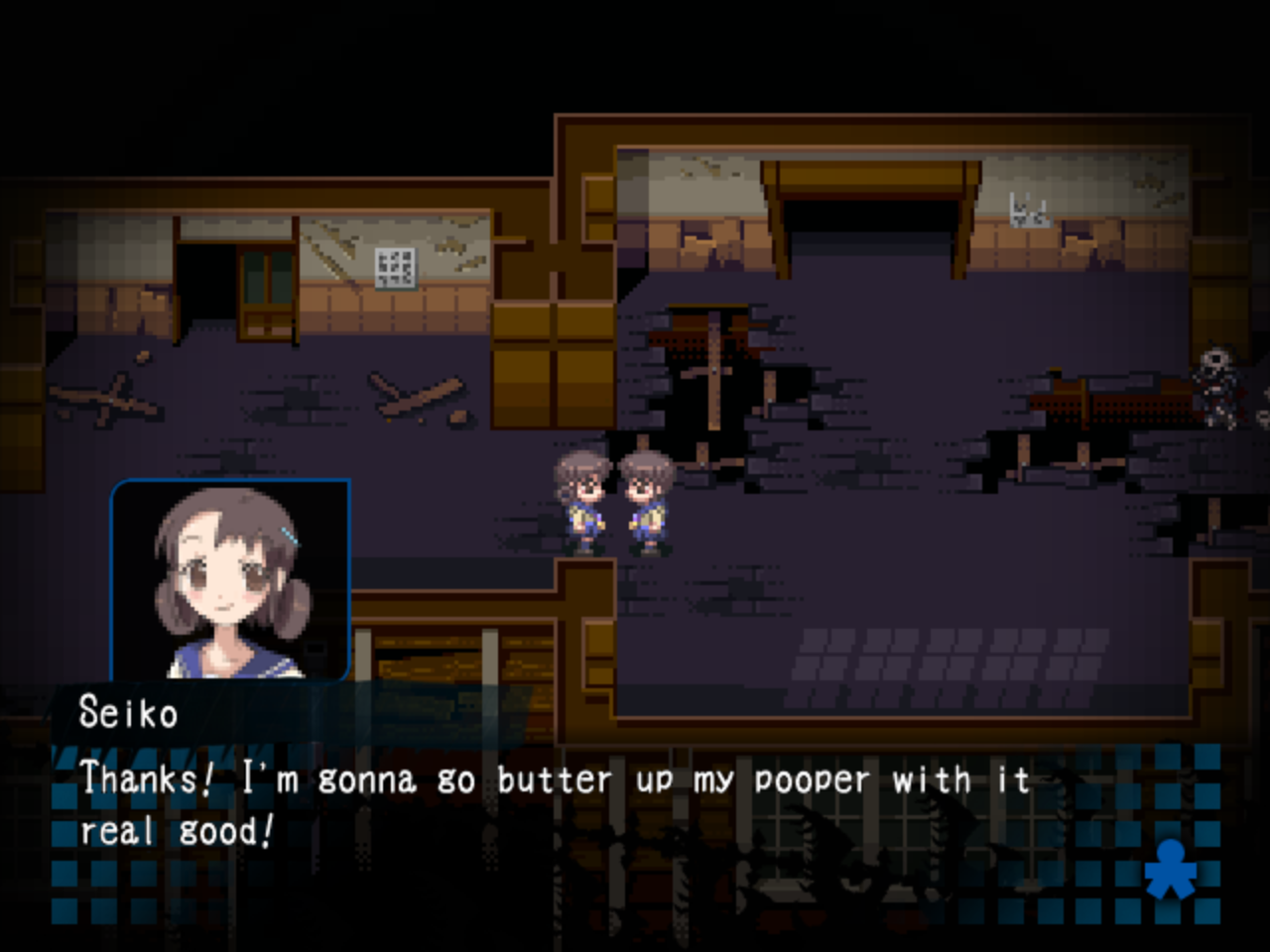 “Moisten up your bum with mama’s butter to make the inevitable fear poops go down nice and smoothly!” – A dead person.
END_OF_DOCUMENT_TOKEN_TO_BE_REPLACED 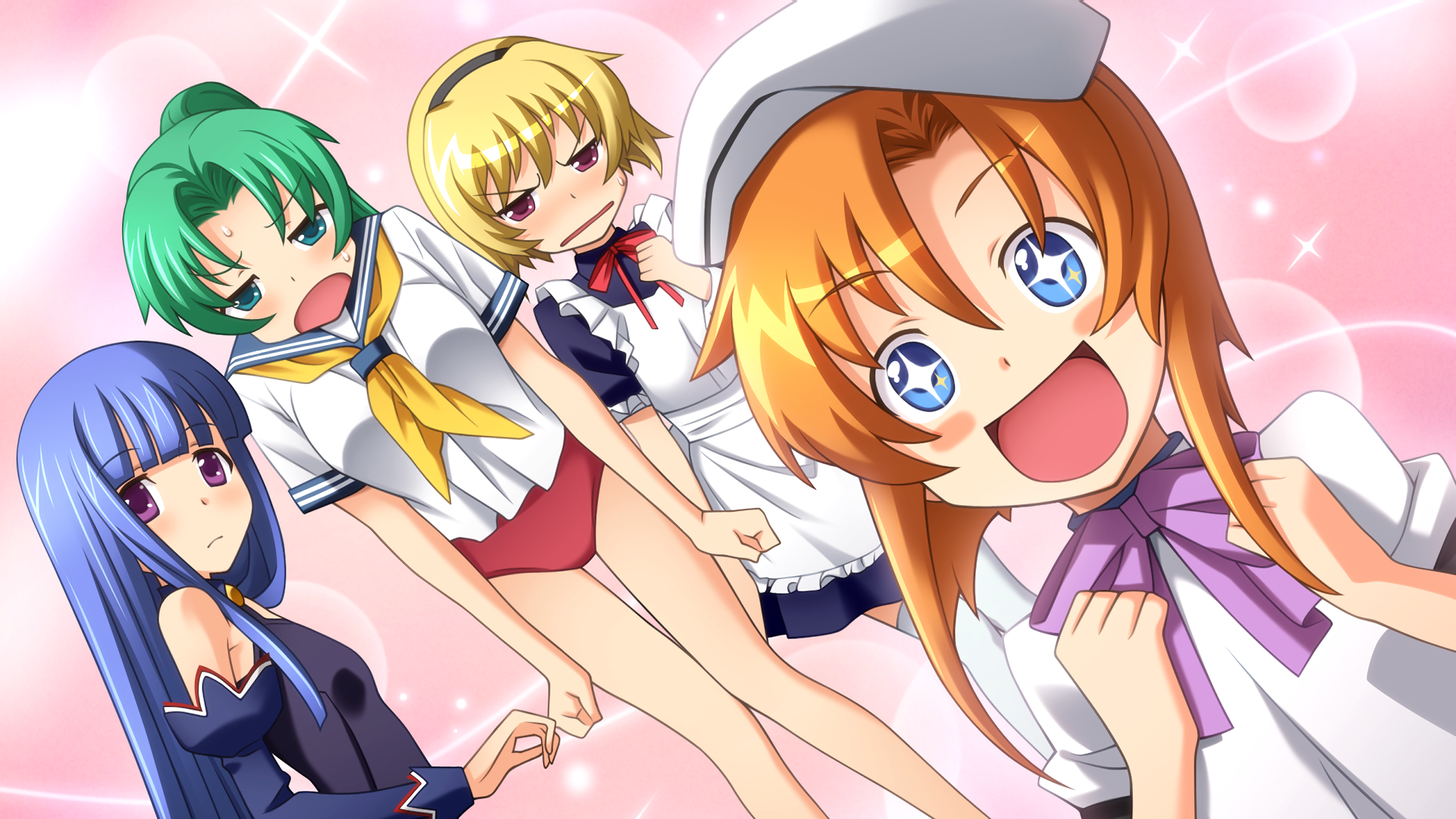 After waiting a year of “TLC and editing” and a month for the mod to be updated, it’s finally here!
END_OF_DOCUMENT_TOKEN_TO_BE_REPLACED 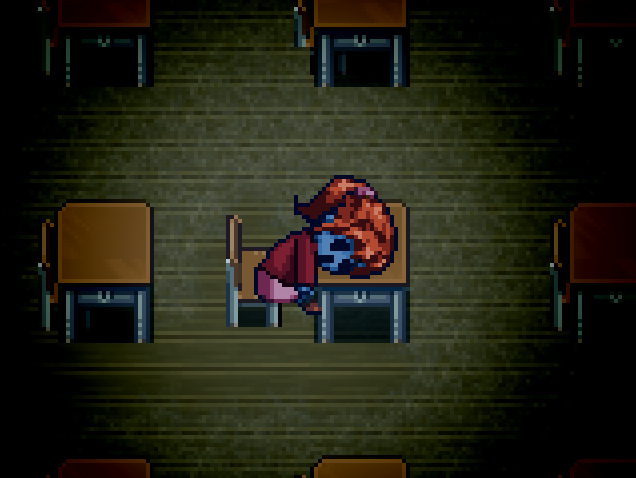 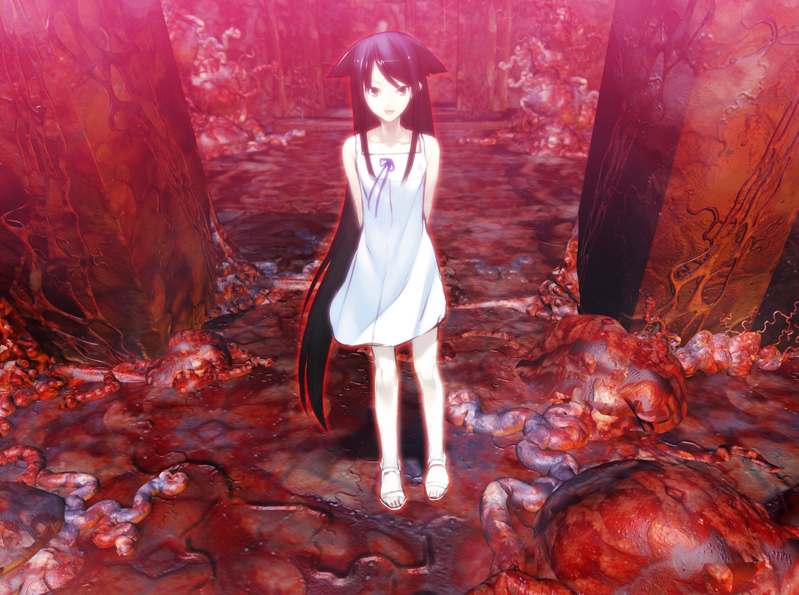 Listen up, here’s a story.  About a little guy that lives in a flesh world.  And all day and all night and everything he sees is just flesh like him— except they are pulsating and screeching inside out abominations and he wants nothing more than to destroy the horrific and disgusting creatures all around him.  And also have sex with his loli waifu.
Disclaimer: The following review contains screenshots depicting blood, viscera, and sexualized children. Reader discretion is advised.  This post is Not Safe For Work. END_OF_DOCUMENT_TOKEN_TO_BE_REPLACED 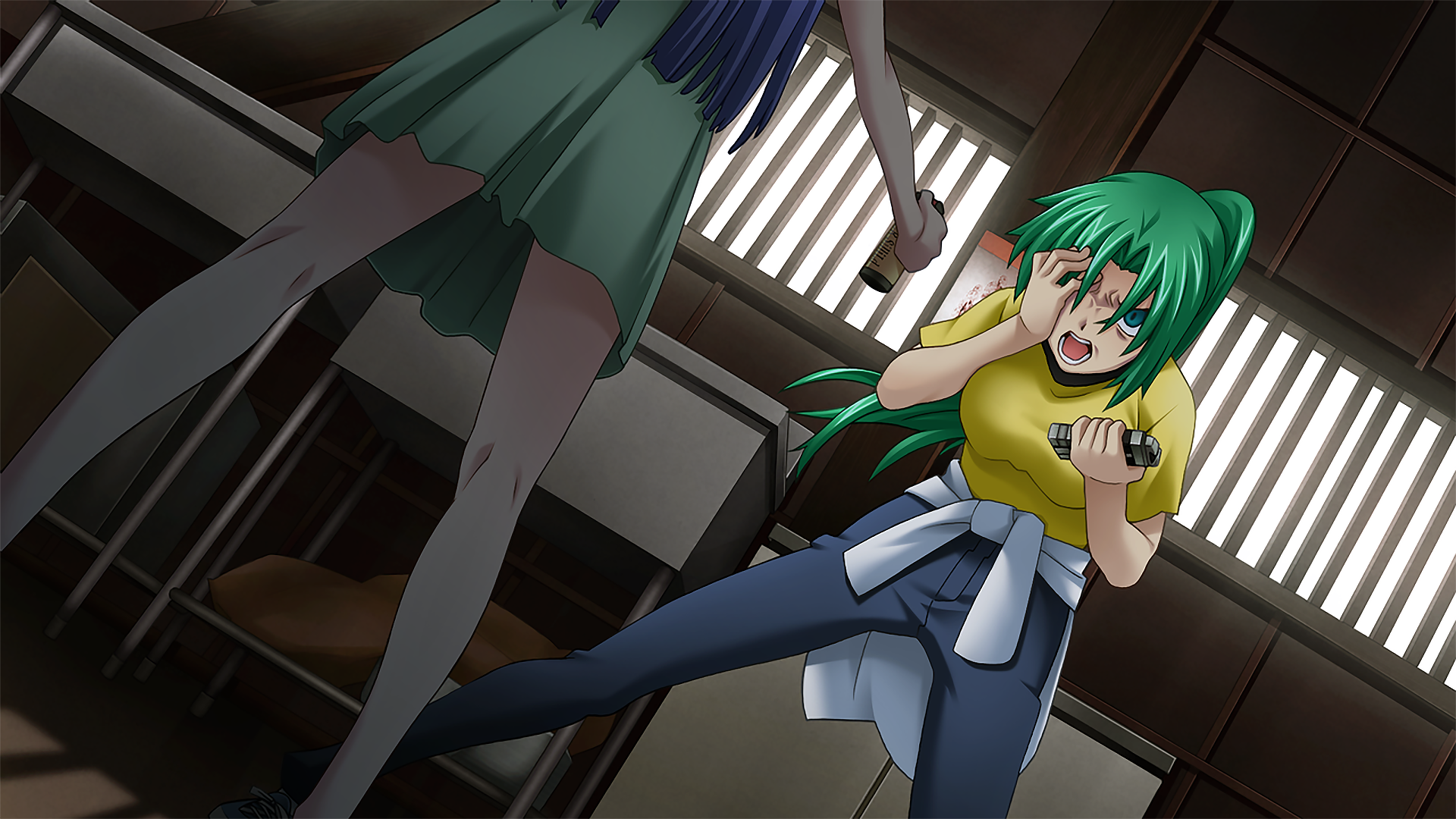 Another few months have passed, and another chapter of Higurashi has been released.  I have been reviewing this series as the new translated versions have been coming out from MangaGamer, and after reviewing the four part Question Arc, it is finally time to dive into the Answer Arc, Higurashi: When They Cry Kai. END_OF_DOCUMENT_TOKEN_TO_BE_REPLACED 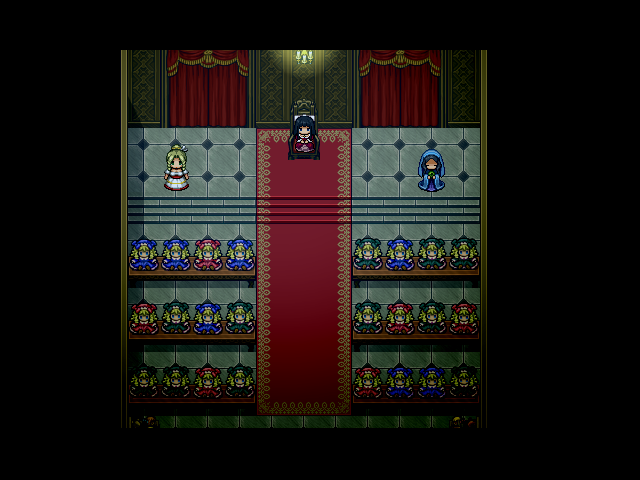 At this point, it should be evident that I am more than happy to explore a more niche side of the already niche centric Japanese game industry, so it seems like it was only a matter of time before I delved into the super specific subgenre of Japanese horror games developed in consumer level RPG creation engines.  A genre I planned on exploring with the latest version of Corpse Party, but the game has gone through many permutations and it turns out that the PC version that I purchased is inferior to the recent 3DS release, who’d have thought?  So instead I’m reviewing Mad Father. END_OF_DOCUMENT_TOKEN_TO_BE_REPLACED 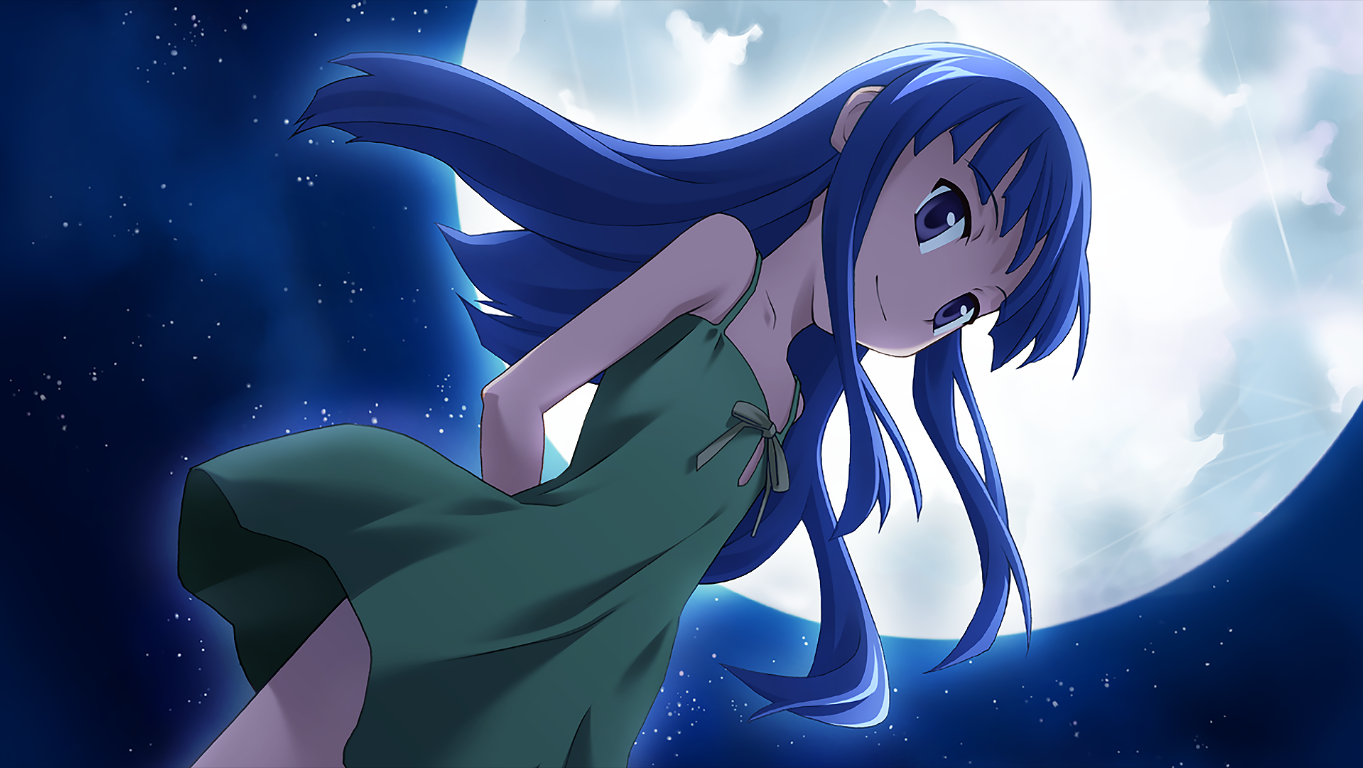 Seeing as how I reviewed chapter 3 of Higurashi a mere 2 weeks ago, I don’t really have much of an introduction for this review.  I said a large number of great things about it, and was excited to see how the fourth chapter in this series played out.  So I’m going to cut all pretenses and jump right in. END_OF_DOCUMENT_TOKEN_TO_BE_REPLACED 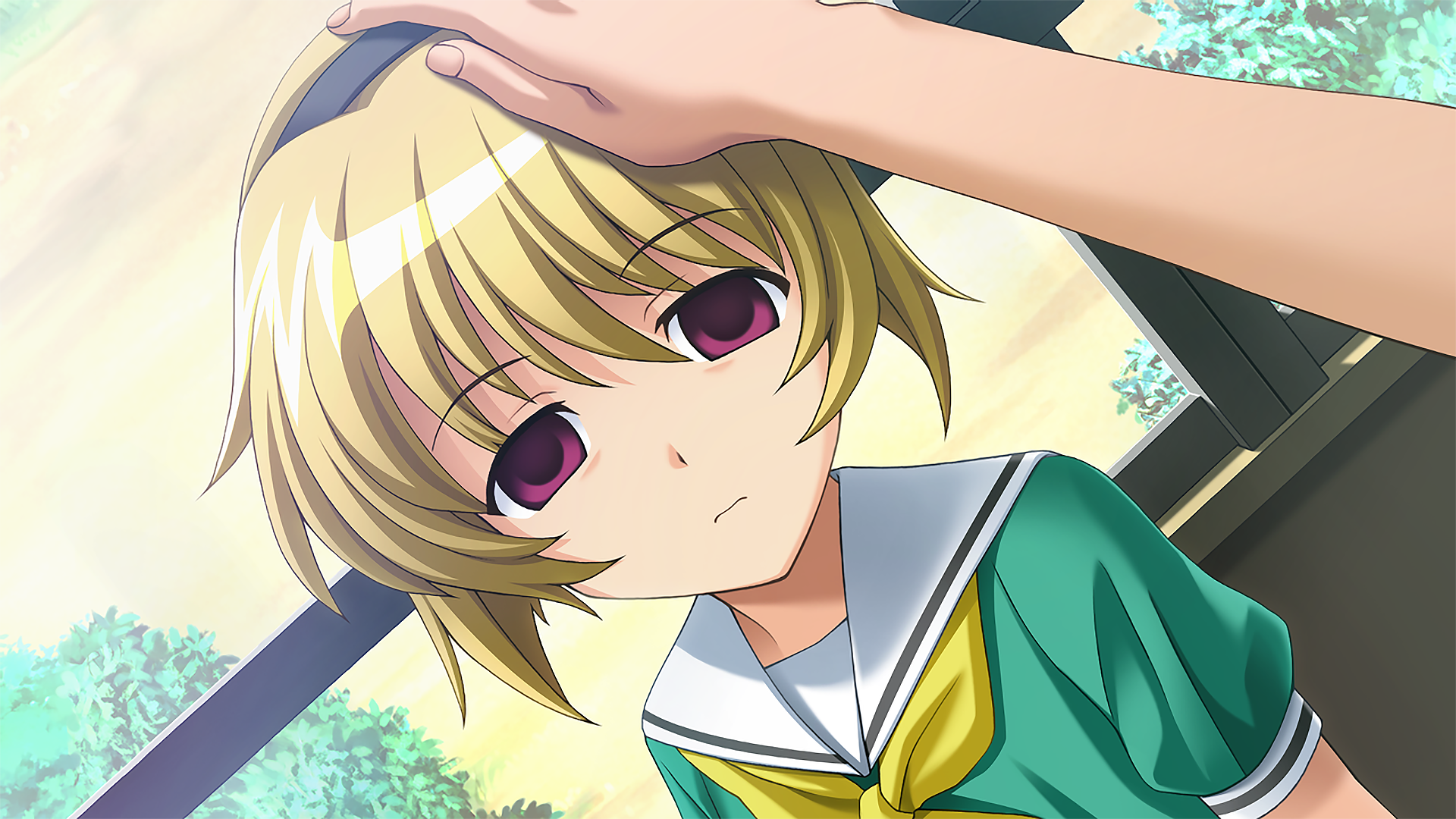 So, it’s been about a year since I last touched the Higurashi series with chapter 2, even longer since I reviewed chapter 1, and I really don’t have much of an excuse for that.  While the second installment did not captivate me like the first, it was never my intention to give up on the series after I more or less stated that I intended on exploring this series of visual novels in its entirety.  The series simply slipped my mind for several months, and only recently did I so much as purchase the currently released chapters.  So without further ado, Higurashi: When They Cry Chapter 3 – Tatarigoroshi. END_OF_DOCUMENT_TOKEN_TO_BE_REPLACED 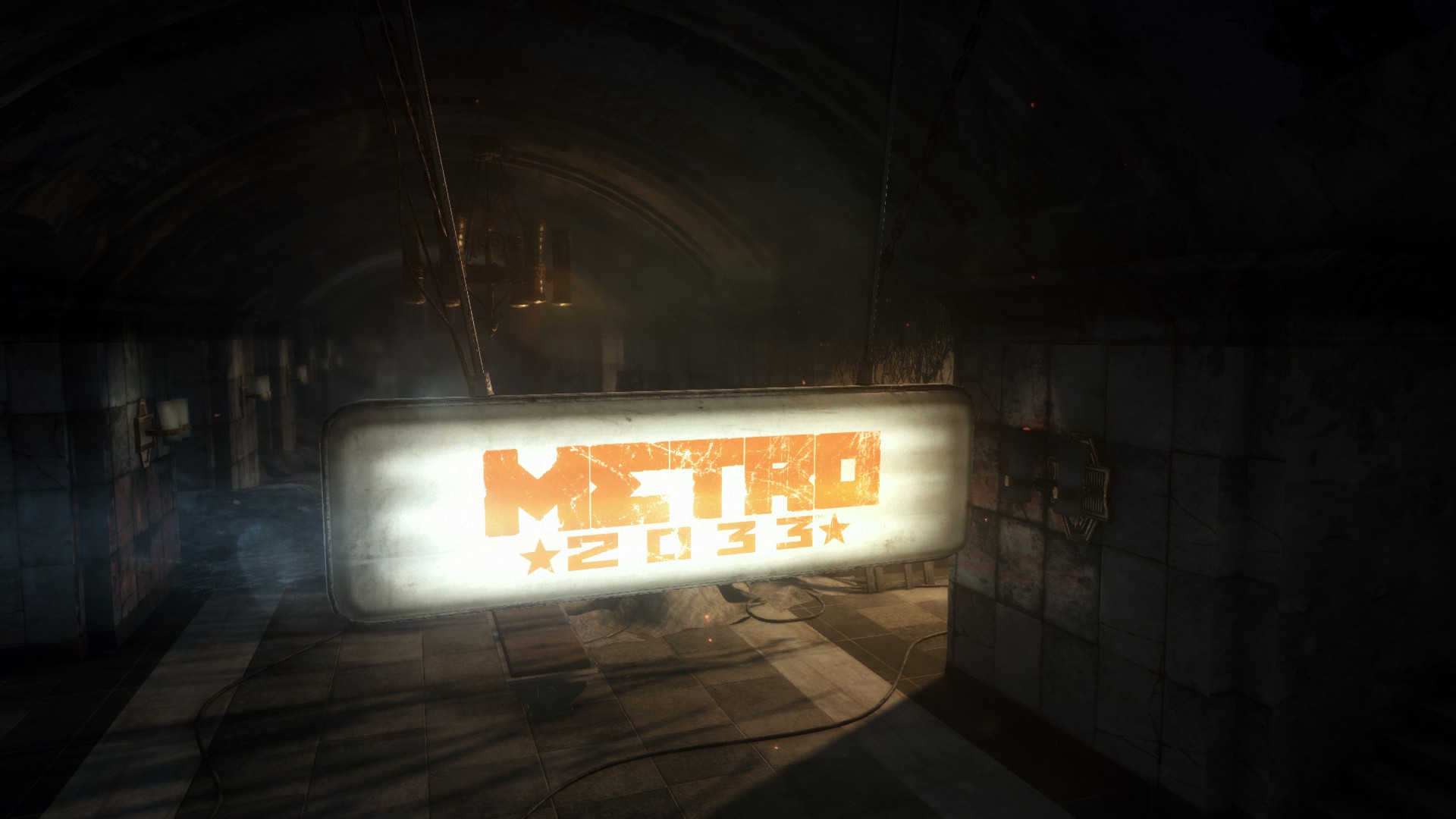 This game has been sitting in my “games to review” queue for quite a while now, and I’m not really sure why.  True, I was not the biggest fan of Metro: Last Light, but I do have fond memories of playing the original Metro 2033 years ago and a remastering like this would ideally improve whatever shortcomings that game had.  Ideally, but in trying to fix a few things, it turned what I recalled as being a delightful little experience into a far more annoying one. END_OF_DOCUMENT_TOKEN_TO_BE_REPLACED 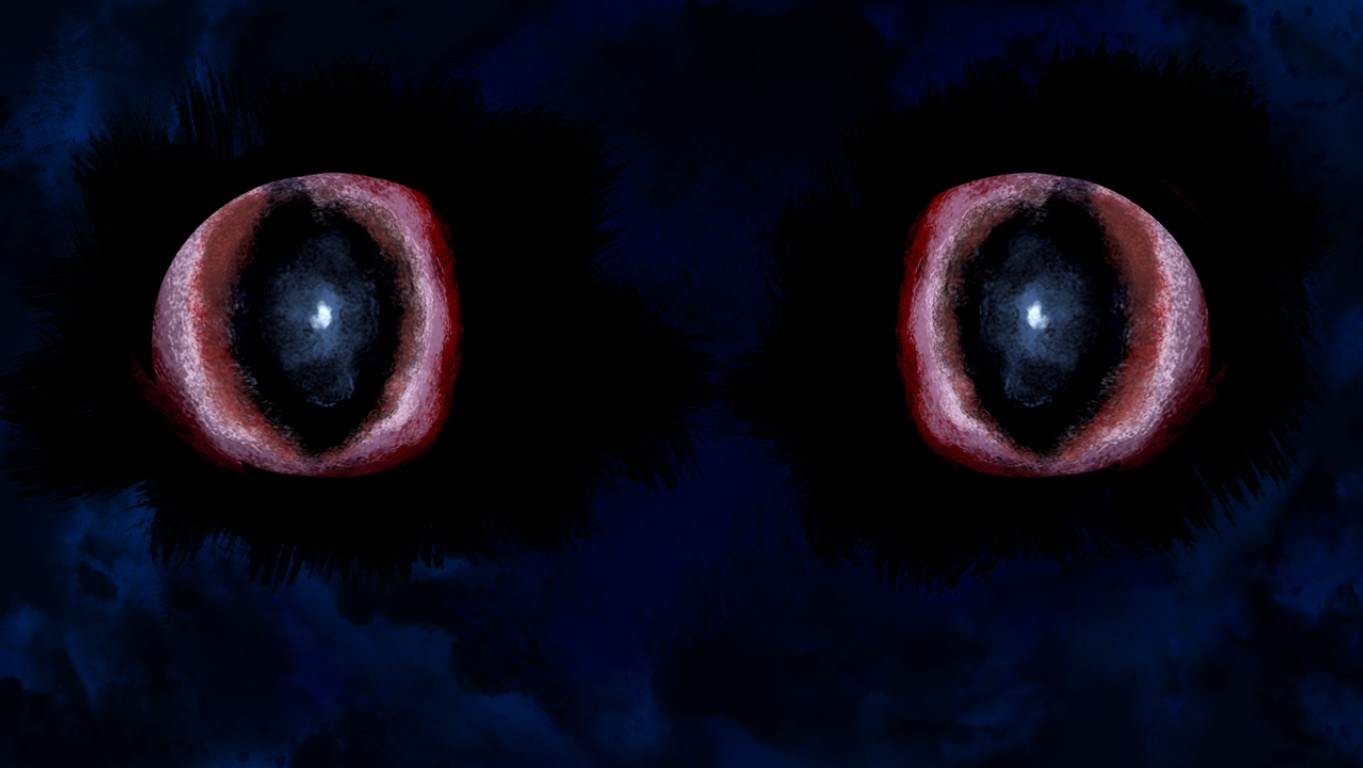 A few months ago, I reviewed the first chapter of MangaGamer’s retranslation of the decade-old Doujin darling that is the Higurashi series, liking it quite a lot, and choosing to dedicate myself to see this series through as it gradually releases over the next few years. Once again, I played the game using a fan created mod that adds in new visuals, changes the aspect ratio, and gives the game voice acting, all of which were from a PS3 compilation of these games, but not the PC version. You can find the mod here. END_OF_DOCUMENT_TOKEN_TO_BE_REPLACED 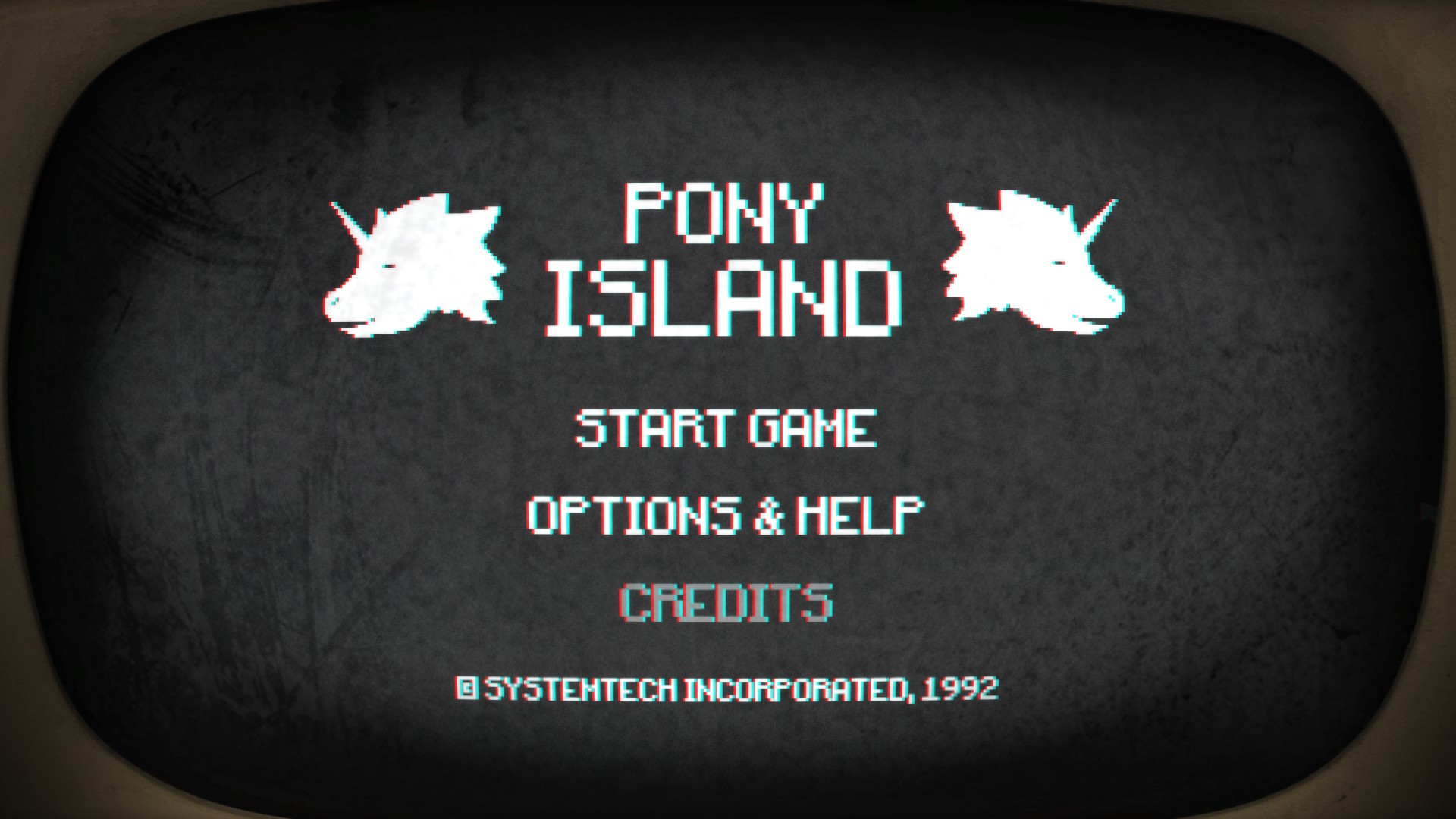 Over the past few years, there has been a resurgence of games that have tried to play with the medium, break the fourth wall, and blur the line between an isolated game narrative and the actual game.  Games like Undertale and The Stanley Parable are just two of the more well known examples, and Pony Island is certainly deserving of a spot on that steadily growing list.   END_OF_DOCUMENT_TOKEN_TO_BE_REPLACED 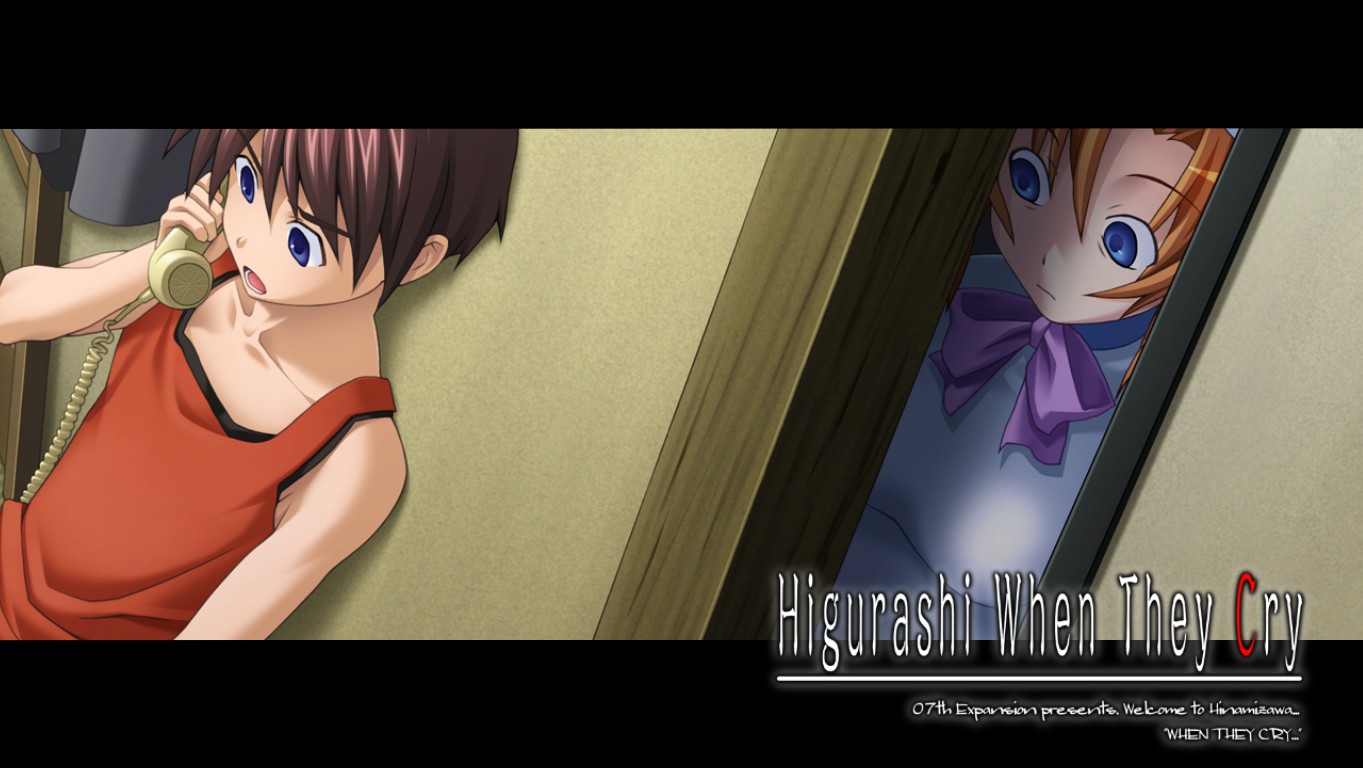 Higurashi: When They Cry is a series of visual novels originally released at Comiket in 2002, and since then have received fourteen Sound Novels, a 38 volume manga series, a total of fifty anime episodes and OVAs, 21 light novels, two live action films, and more.  Following a particularly poor translation of the eight main titles of this series, MangaGamer decided that while they are porting over quality visual novels and eroge, they could tackle this beast with their workforce.  Oh, but they could not secure the assets from the recently released PS3 version for this PC release.  But, somebody made a mod so you may install the backgrounds, sprites, and Japanese voiceover in order to help enhance the experience.  You can find out how to install the mod in the Steam Community Guides for this title. END_OF_DOCUMENT_TOKEN_TO_BE_REPLACED 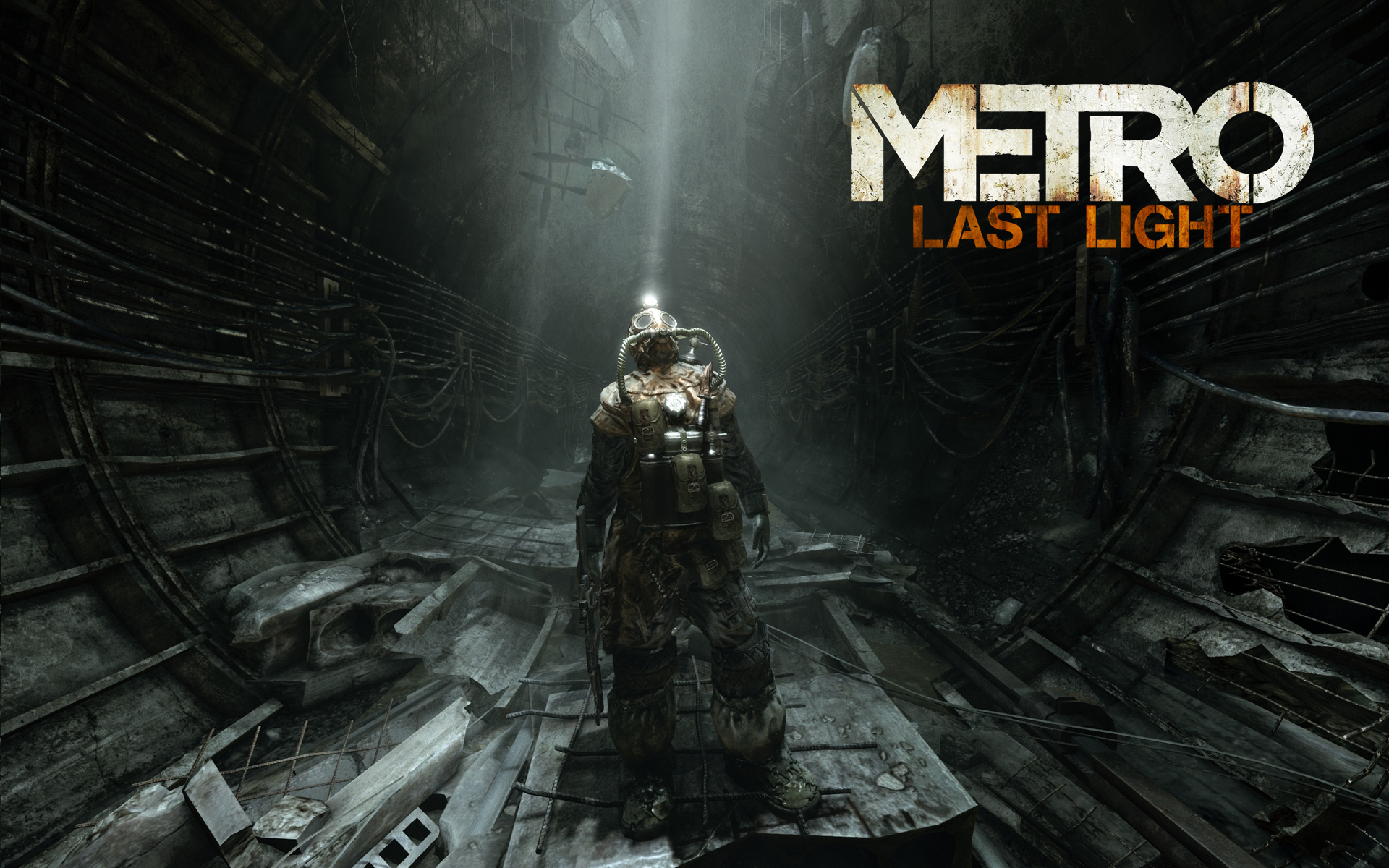 Funny story about how I got Metro: Last Light.  I was just getting into the PC gaming in July when I was directed a link to snag the game for a penny… legally.  The reasoning was that there was some error on Best Buy’s part and I managed to get the game before it was fixed.  Why did it take me so long to get around to seeing as how I really liked the 2033rd?  Well, I wanted to play the game in ranger mode, waited until it was on sale, played it, and realized that ranger mode was pretty terrible due to how it is impossible to know how much ammo you have.  Backstory handled, so let’s talk the twenty-thirty-four! END_OF_DOCUMENT_TOKEN_TO_BE_REPLACED