If this past week is any indication, I think one of the biggest issues that will permeate throughout gaming this upcoming generation is the matter of games distribution.  This was originally a fairly simple concept, but with digital distribution growing in popularity, many game companies have been looking for ways to have the means of distribution better serve them by creating their own platforms or signing exclusivity deals in order to lessen the risk associated with launching any kind of product.  While this sort of thing typically results in the establishment of a diverse and competitive marketplace that ultimately benefits the consumer in the long run, in the short run it creates a very hectic environment where the consumer is put in a place of uncertainty and inconvenience as they need to choose what platform they’re going to invest their time and money into.

For the past year or so it has been known that Google was working on their own gaming platform.  A platform that the public had the opportunity to play with in the form of last year’s Project Stream, which offered many players, myself included, the opportunity to experience the next generation of streaming with Assassin’s Creed Odyssey, and… it worked pretty darn well in my experience, though I also have fairly good 50mbps internet.  Anyways, at GDC this week Google revealed this platform as Stadia, a streaming service that can be accessed via PCs, tablets, phones, and TVs.

I say platform, because this truly cannot be considered a console in any way, as the service lacks any form of dedicated hardware to call its own.  It can even use just about any controller, even though the service does have an accompanying controller that comes with its own sharing capabilities and a microphone that can be used with Google Assistant to provide the player with a walkthrough or answer.  Which is a nifty quality of life feature in and of itself.

Overall, there is a lot to like about the idea of Stadia and the features it boasts.  Seamlessly jumping into a game via any device, and being able to easily stream and archive gameplay while doing so?  That’s rad. Being able to share specific sections of gameplay via State Share or jump into someone’s stream via Crowd Play?  That has a lot of potential. But I am still against the idea of games that are only available via streaming, the lack of any information about a specific pricing model leaves me feeling uncertain, and in general there are too many unknowns here for me to feel too strongly about the service.  Hopefully more finite details will be revealed before Stadia launches this summer, but I have a feeling that it will be bad news given the general of bitterness and frustration this announcement has stirred within many.

A sentiment that can be shared and associated with whenever a game is announced to have a year-long exclusivity with the Epic Games Store, which, had its own share of announcements that came from GDC, including the reveal of a number of 1 year exclusives.  These include The Outer Worlds, Control, and Ancestors: The Humankind Odyssey, but the more notable announcement here is that Heavy Rain, Beyond: Two Souls, and Detroit: Become Human are all coming to PC.  Meaning that the entire 5-part saga of Sadness will now be available on a single platform!

In all seriousness though, this is a big deal gien how all three of those titles were Sony published and funded affairs, which sets a president for other Playstation exclusives to come to the PC if somebody (Epic Games) are willing to fork over the funds needed.  Well, I say Epic, but the entire PC port proposition is likely a direct result of NetEase’s investment in Quantic Dream, as bringing these games to PC is also a great way to bring these games to the Chinese and broader Asian market.  Which Epic is also quite interested in by virtue of being partially owned by Tencent.

Now that some time has passed, details have emerged, and things have fallen into place, I think I am beginning to see the supposed narrative behind Epic’s newly launched storefront and what they actually want to see going forward.  They are a privately owned company that is not responsible to shareholders and has a very strong interest in the future of this industry, and is in an incredibly advantageous position to throw their bountiful assets around, having created one of the most commonly used game engines on the market and launched a game that became an icon around the world.

I believe that they became genuinely worried about the level of clout Steam has in the PC gaming space, combined with the lack of curation and marketplace saturation that they have cultivated, creating an environment where it is hard for many small developers to find something approaching success.  Epic wants to create something more structured, reliable, and ultimately beneficial to developers, and while I believe that they are on the right track by offering free games, these exclusivities strike me as a brash and aggressive way to draw people to your store. While I really do not care about waiting over a year to play a game, a lot of people do, and they have many reasons to not want to use Epic’s store… because it’s barely finished. 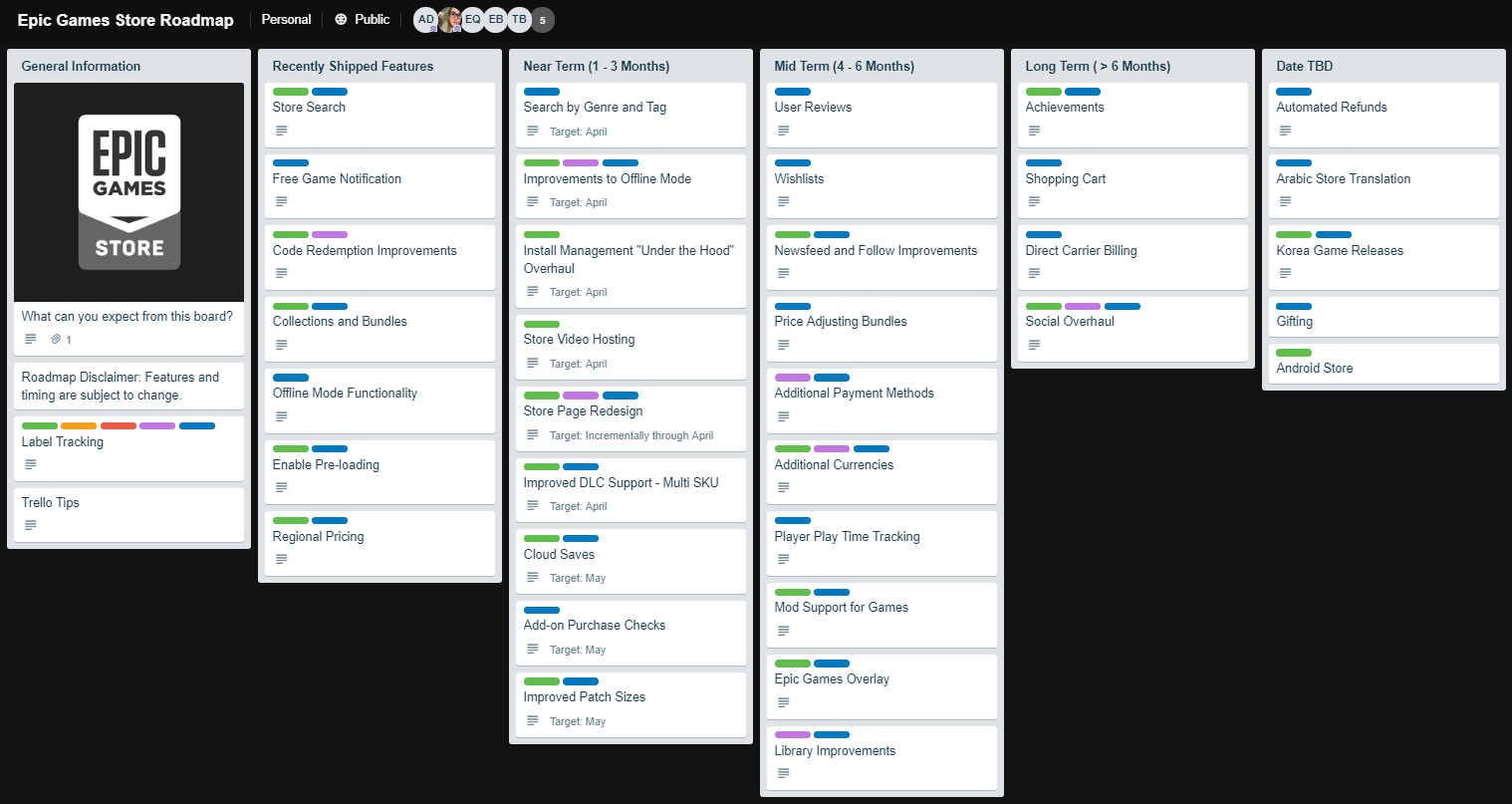 Just looking over Epic’s feature roadmap for the store makes it clear just how many basic features it lacks, and how the entire platform feels like it was launched a year too early, resulting in a lot of slapdash moves.  Such as their dubious methods of getting one’s personal data from Steam, which the CEO stated they plan on changing.  I actually do believe that Epic could be good for the industry in the long term, but these early missteps have not earned it any favors, and I am still apprehensive towards buying anything on the store due to how, from a game consumer’s perspective, it seems like a worse alternative to the industry standard.

I hope that within a year’s time this situation will be vastly improved, as even competition without any underhanded tactics is what consumers really want, and I really do not want to view a company like Epic in a remotely negative light.  Especially after they established a $100 million grant program to help developers, enterprise and education, without asking for anything in return.  Golly this was a long topic…

Shifting away from GDC related news, this past week also was home to a Nintendo Nindies showcase, something that I do not really cover or mention, but this one warrants an exception as Cuphead was formally announced for the Switch, and is slated to release on April 18th.  This port was rumored heavily over the past few months, and does make quite a bit of sense, serving as a release that will further the relationship between Nintendo and Microsoft, while also introducing the retro-styled co-op boss rush action of Cuphead to a new audience.  Oh, and this port is launching in conjunction with some new extras and languages via a free update

Yet that was not the only brow-raising announcement from this Nindies showcase, as it was announced that the highly acclaimed rhythmic dungeon crawler strategy game Crypt of the NecroDancer would be receiving a Switch-exclusive spin-off in the form of Cadence of Hyrule – Crypt of the NecroDancer.  Or in other words, Nintendo is letting an independent developer make a Zelda crossover… and it looks really good.  Between the lavish sprite art, an appealing art style based off of a wide number of Zelda games, and a plethora of fan service, this looks like a fully fledged and supported title, and I am quite interested in seeing more of it when it launches this spring.  I mean, I’m not going to play it because I am awful at rhythm games, but I will probably look at it a bunch.

Seeing as how they more or less gave up on full-on game development beyond annual iterations of PES, the only contributions Konami really has to make in the game industry now is re-releasing their classic library, and that’s just what they are doing with a series of 50th Anniversary Collections based on their Arcade Classics, Castlevania, and Contra.

The Arcade Classics collection will debut on April 18th and will feature many of their classic shmups (I’ve given up the notion of calling them anything else) including the first two Gradius titles, Life Force, TwinBee, Typhoon, Thunder Cross, Scramble, and… Haunted Castle, the arcade adaptation of Castlevania 1… okay?  While the Castlevania and Contra collections have currently incomplete libraries said to include 8 games each, and will both launch early this summer.  Each collection will only be available digitally for a reasonable $20, and unlike last year’s Castlevania Requiem, the collections will be available for PS4, Xbox One, Switch, and PC.  Part of me hopes that these ports are good and lead to the re-release of other titles that I would be far more interested in, such as the GBA Castlevania games or the earlier Metal Gear Solid titles.  But Konami is Konami, and Konami knows how to disappoint.

A while back Paradox Interactive purchased a number of Intellectual Properties that included the cult classic PC adventure game Vampire: The Masquerade – Bloodlines.  A title highly praised for its storytelling and world building, but it did not really work and launch due to various technical foibles and while many tried to get the game to work over the years, it never quite worked as well as it should.  As such, I cannot say that I ever expected it to be sequelize, due to the simple fact that people generally like playing games in their numerical order, yet the subseries will be revived in the form of Vampire: The Masquerade – Bloodlines 2, which based on the CG reveal trailer will be about what one would expect from a modern rendition of the original title while also serving as a seemingly direct sequel in a move that I’m sure will frustrate some people inexperienced with the original game.  Though those who have experienced the original titles seem to have reacted to this news with the utmost joy, eager to check this title out when it launches for PS4, Xbox One, and PC in 2020.

To close off this week, remember that Persona 5 teaser from January?  Well, it was finally followed-up on with yet another teaser that revealed a new female character and the project’s full name as Persona 5: The Royal, while announcing that the game will be a Playstation 4 exclusive… and that’s it.  No description of what the game actually is, just a notice that more information will be revealed on April 24th, because Atlus is Atlus, and Atlus kind of sucks when it conducting the hype train.  Really, at this point I think that everybody just wants this gem to be an updated Persona 5 with a female main character for it to be on the Switch.  Though this trailer seems to imply that this new character is more of a Marie a la Persona 4: Golden than a new protagonist… in which case I just want this game on a system other than the PS4, thank you kindly Atlus.

Header image comes from the manga Trans Venus, because I could not find anything better representative of a cataclysm in my image library that did not involve flesh monsters.